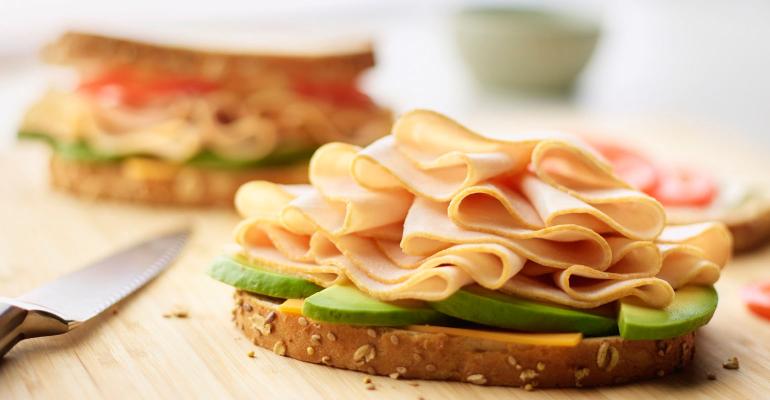 The demand for “clean” menu items is stronger than ever. Restaurant-goers are looking for all-natural, minimally processed ingredients, with nothing artificial, while at the same time demanding more flavorful fare. To attract this new wave of patrons, chefs and operators are developing innovative dishes that showcase on-trend, all-natural proteins.

Turkey, which has long been viewed by customers and restaurateurs alike as a healthful, tasty menu option, is increasingly filling this demand for lean protein. All-natural turkey has become even more appealing as consumers seek less-processed foods with no artificial ingredients.

The movement toward clean menus is part of a growing trend, experts say. “Given Americans’ focus on health and ingredient sourcing, it is important to offer as many natural meats and animal products as possible,” says Jean Bernstein, founder and chief executive of the Flying Star Cafe in Albuquerque, N.M. At the six-location eatery, one of the most popular sandwiches is the signature Turkey Jack Melt, with freshly sliced, thick-cut, all-natural turkey breast, locally grown and roasted green chile, pepper jack cheese and homemade rustic white bread, grilled in butter. Bernstein says the sandwich is the seventh most popular item on the menu.

According to market intelligence firm Mintel in its Poultry - U.S. - November 2017 report, “free-from” claims are becoming increasingly popular as consumers look for foods they trust and feel good about eating. Among the top attributes that consumers seek in poultry are White Meat, Boneless, Hormone-Free, No Growth Stimulants and Free-Range, Mintel says. The industry has responded with new product launches that highlight these free-from features (federal regulations prohibit the use of hormones or steroids in poultry). Launches of poultry with all-natural claims increased by 74 percent from 2014 to 2017.

Better burger concepts are also responding to consumer demands for more healthful proteins. At Golden, Colo.-based Larkburger, the turkey burger is an all-natural turkey thigh, which the chain says is popular as a savory alternative to beef.

“Larkburger was founded on the notion of creating a place where families could feel good about the food they are putting in their bodies. It’s about simple, natural ingredients being prepared with culinary care. It’s good to see our guests, and consumers in general, becoming more concerned with and more knowledgeable about what they consume,” says chief executive Todd Coerver.

Some operators say they are menuing all-natural turkey because it tastes better. “All natural usually means something is less processed and therefore will taste as pure as the product can be,” says Chef Dave Anoia of DiAnoia's Eatery in Pittsburgh. “You cannot beat the fresh taste of all-natural turkey.”

At Alpharetta, Ga.-based Fresh To Order, serving all-natural turkey is important from a brand integrity standpoint, says president Jesse Gideon. “We strive to serve a better product; it is our brand.”

One of the most popular items is the Turkey Club Panini, served on Fresh To Order’s ciabatta bread or hand-stretched wheat flat bread. It is topped with Monterey Jack and cheddar cheeses, lettuce, tomato and a house-made bacon honey mustard dressing that gives it a smoky, sweet, tangy flavor. Gideon says that the Turkey Club Panini is always among the top three most ordered sandwiches.

Gideon says the key is to take time and care in ingredient sourcing so the kitchen staff has to do very little to keep the true product intact. “We fabricate so much ourselves in-house every day, and when we work with great, clean, all-natural product, the end result is so much better,” Gideon says.

Manzo says Jersey Mike’s has not had to increase prices on sandwiches, even though it is serving higher quality proteins. “Our food cost is probably the lowest it’s ever been because of technology and training,” he says. “We slice every sandwich to order, right in front of you. We have a minimal amount of waste.”

One of the most popular menu items is the No. 7 Turkey Breast and Provolone sandwich. “We use whole-muscle meat, which is excellent in turkey breast,” he says.

Manzo adds that younger consumers are especially interested in all-natural foods. “Millennials are looking for clean label and healthy [items],” he says. “They want fast food but better choices.”

“It’s a different approach because the price on food is just like a regular restaurant — like something you find out in the public,” Garcia says. “For the money we’re charging, quality is a big factor.”

And the trend toward offering clean menus and all-natural ingredients is only expected to gain momentum. According to the National Restaurant Association’s What’s Hot Culinary Forecast 2018, “natural ingredients/clean menus” rank second among Culinary Concepts, with 69 percent of chefs surveyed calling it a Hot Trend.

As a result, it makes sense for chefs and operators to give consumers what they want by offering innovative menu items that showcase on-trend ingredients and flavorful, all-natural proteins like turkey.