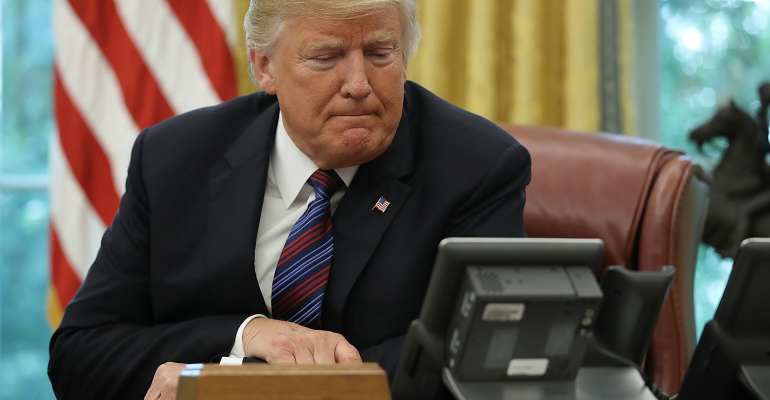 Win McNamee/staff/Getty Images News
Trump issued the executive order over the weekend but it is unclear if it will be able to go into effect.
Coronavirus>Restaurants Ready

President Trump on Saturday signed an executive order and three memoranda meant to provide immediate financial aid to those struggling during the ongoing pandemic crisis, including additional assistance for unemployed Americans, renters and homeowners, as well as deferral of payroll taxes and student loans.

The move comes after negotiations over the next round of stimulous failed last week and the July 31 deadline marking the end of the $600 enhanced unemployment benefits under the CARES Act came and went.

Here is a breakdown of what the President’s executive order and three memoranda could mean for Americans if they go into effect:

The memorandum states that the federal government will pay for 75% (or $300 worth) of the weekly payouts from FEMA’s Disaster Relief Fund, and the remaining 25% (or $100) will be provided by states to “provide temporary enhanced financial support to those whose jobs or wages have been adversely affected by COVID-19.”

It is unclear whether or not the President has the authority to extend unemployment benefits, according to the Associated Press.

But is the added expense for cash-strapped state governments doable in the midst of the ongoing health crisis? Not according to New York Gov. Andrew Cuomo:

Ohio Gov. Mike DeWine said he does not know if his state can afford the 25% unemployment payment and told CNN in an interview Sunday that “we’re looking at it right now to see if we can afford this.”

When asked at a press conference how many governors signed up to participate in the new unemployment benefit, Trump did not directly answer and said, “If they don’t, they don’t. That’s up to them.” On Sunday night, Trump appeared to have changed his mind, telling reporters that states could apply for the federal government to provide for all or part of the $400 payments, and that decisions would be made on a state-by-state level.

The White House released a statement that Sunday night, clarifying that “funds will be available for those who qualify by, among other things, receiving $100/week of existing assistance and certify that they have lost their jobs due to COVID-19.”

The Secretary of the Treasury would then “explore avenues, including legislation, to eliminate the obligation to pay the taxes deferred pursuant to the implementation of this memorandum.”

While none of these executive orders/memoranda are designed to directly aid businesses, this could change employees’ tax liability, which could affect the amount that employees withhold from paychecks, according to Inc.

“I don't see how he can make them permanent without legislation, and even the temporary suspension of collection of the tax is of dubious legality," Robert Litan, an economist at the Brookings Institution, a nonpartisan think tank in Washington, D.C. told Inc.

White House advisor Larry Kudlow later told CNN that the President did not mean that he would permanently cut taxes that fund the Social Security programs.

“When he referred to 'permanent,' I think what he was saying is that the deferral of the payroll tax to the end of the year will be made permanent,” Kudlow said.

The executive order issued a moratorium on evictions through the Departments of Housing and Urban Development, Health and Human Services, and the Centers for Disease Control and Prevention. The executive order said that the President’s administration will “do all that it can to help vulnerable populations stay in their homes” as the CARES Act moratorium expired without Congress coming to an agreement for a replacement. The executive order also stated that the Federal Housing Finance Agency extended the eviction moratorium until Aug. 31, 2020.

The Secretary of Housing and Urban Development will be “taking action” to avoid evictions/foreclosures including “encouraging and providing assistance to public housing authorities, affordable housing owners, landlords, and recipients of federal grant funds in minimizing evictions and foreclosures.”

The original student loan relief program under the CARES Act is expected to expire on Sept. 30 and the memorandum issued by the President “extends this policy until such time that the economy has stabilized, schools have re-opened, and the crisis brought on by the COVID-19 pandemic has subsided.”

But will the executive orders go into effect?

There seems to be partisan discrepancy over whether or not the President is allowed to issue unemployment benefits and payroll tax changes through executive order rather than traditional legislative means.

Pelosi and Senate Minority Leader Chuck Schumer (D-N.Y.) later issued a statement calling for Republicans and Democrats to “return to the table” to issue another Congressional relief package.