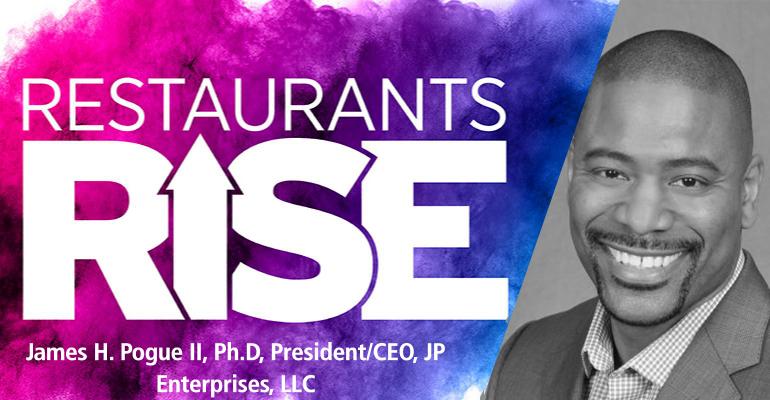 Keynote speaker Dr. James H. Pogue II believes there is much more that businesses could be doing to address inequality and biases in their hiring, training and promotion processes

The resurgence of the Black Lives Matter movement in the wake of continued police violence has pushed racial-bias conversations to the forefronts of our minds, in both our homes and our places of business. Acknowledging that there are problems is the first step toward mending our nation, but how do we move forward to take action? Within the workplace, answers are not always easy and take a lot of work from a corporate, managerial, and employee-driven perspective, Restaurants Rise keynote speaker Dr. James H. Pogue said in a Tuesday webinar session on “A Restaurant’s Role in Diversity, Inclusion & Social Justice.”

Embrace what you don’t know

According to Dr. Pogue, the average person knows about 10-15% of what they think they actually know about race, and as they begin to unpack their individual blind spots or biases, that number gets even lower.

But it’s okay to have an imperfect start, as long as we explore that ignorance and the impact it might have on our employees, colleagues and customers:

“How does that make you feel? How does it make the people you work with feel?” Dr. Pogue asked. “You recognize it’s possible that without malice you may have caused hurt or harm to people, whether it’s because you didn’t see them as promotion material or you didn’t see they were going through things on the way to or from work or that their needs are dramatically different than yours.”

Don’t push off responsibility onto someone else

After you embrace that you don’t know everything, and that each of us have bias blind spots, what next? According to Pogue, the best thing to do is to take responsibility for these issues and not to wait for someone else to take the lead in fixing these racial issues or biases.

“It’s not easy and takes a fuller commitment and assertiveness,” Pogue said. “We work in the hospitality space and we know what hospitality looks and feels like so how did you miss the aspect that looks at race? That server that was asked not to service a particular guest, that person who was not hired or promoted because her name was too difficult to pronounce. What is your responsibility there?”

Racial bias, discomfort and exclusion should not be someone else’s problem, he said.

Being non-racist is not enough

Privileged people will often respond to allegations of prejudice or bias by saying, “I’m not racist.” But even if that might be true (and not just a defense tactic), Pogue encourages everyone — from company leaders and employers to store employees — to be anti-racist instead of simply “not racist.” Being anti-racist requires thoughtful action, instead of just choosing not to participate in exclusionary or harmful behaviors.

“Is being non-racist enough? Is it enough in 2020?” Pogue asked. “We have so far done a great job at avoiding the hard questions […] Evidence suggests that the same muscle that it takes to get good at navigating the race question is the same muscle it takes to get better with [all types of diversity] including the gender question, the LGBTQ+ question [..] all of these big diversity challenges.”

Changing a company from “this is how we’ve always done it” to waking up to their own biases, diversity issues, and inclusion blind spots won’t happen overnight or in one diversity training session; it has to be an ongoing process. Taking steps like hiring a chief diversity officer, having regular training sessions, and “pushing and prodding” your team on a daily basis to be better is all a part of the (usually uncomfortable) process.

“You’re not going to get it right every time,” Pogue said. “Your executive committee is not going to shift overnight to become unbelievably diverse and understanding the nuances of equity in a variety of ways. […] This is the work of people who use a scalpel not baseball bats not the time to pour gasoline on the fire it’s about saying how does that pain make you feel?”

Be an upstander, not a bystander

But being an upstander takes a certain amount of bravery and risk that many employees might feel uncomfortable engaging in, particularly if they’re addressing wrongdoing by a superior. For this, Pogue recommends approaching these challenges as we would any work hurdle.

“How have you dealt with fear and anxiety in the past?” he said. “You got a coach talked to a mentor, etc. It’s the same pathway of gaining courage get that promotion or apply for a new job. How we get stronger as it relates to race and gain more confidence to develop those muscles around [our actions] involve getting a coach, talking to a mentor, discussing it with your team and learning how to stand up.”

Address your own biases

When it comes to diversifying your team or finding new voices and faces to promote, the response might be, “where do I find these people?” But Pogue tells us that this way of thinking actually pushes responsibility onto the person seeking inclusion.

“Isn’t it possible that the people you want to hire, the talented folk out there, see you for what they believe you to be which is not a place that’s comfortable for people who look like them, so they don’t apply to the job?” Pogue said. “This isn’t easy and it’s going to take awhile, so let’s hold hands and jump off this cliff together.”