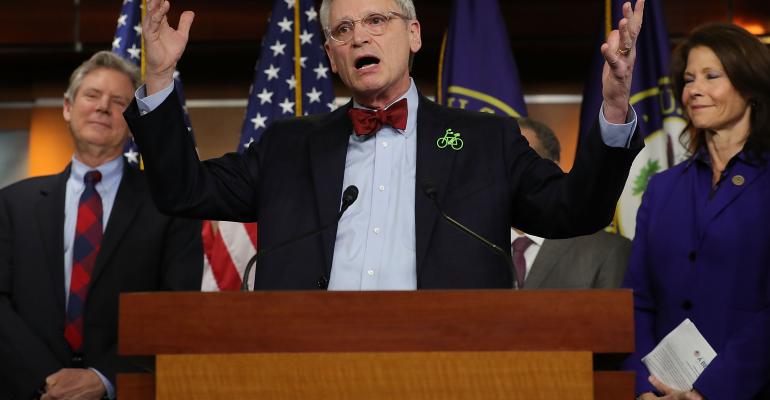 A bill that would provide $120 billion in grant money to independent restaurants could be introduced to the House of Representatives as soon as this week, its sponsor announced Wednesday.

“I’ve had expressions of support from Republicans and Democrats in the house. We’re ready to go and I anticipate that it will be up and circulating for support this week,” Rep. Earl Blumenauer, D-Ore., said during a press conference by the Independent Restaurant Coalition, which supports the bill, as does the National Restaurant Association.

Blumenauer said he was working with Senator Roger Wicker, R-Miss., to develop support in both political parties and both houses of Congress.

He also said that the White House had been receptive to the bill.

“People [in the Trump administration] recognize how essential the restaurant industry is and how they’re hanging by a thread,” he said.

The grants would be targeted for independent restaurants with annual income of $1.5 million or less, he said.

A research report released by the IRC Wednesday said the nation’s roughly 500,000 independent restaurants (about 76% of all restaurants) employ 11 million people in the United States, and that at least 4.5 million have lost their jobs during the pandemic. It said that, without more financial support as many as 85% of them could close permanently by the end of the year.

“Independent restaurants are confronting an existential crisis,” the report said, because the novel coronavirus pandemic has forced them to cease their main business: On-premise dining.

The result was a 70% decline in revenue during the last two weeks of March. Independent restaurants currently have income 60% lower than last year’s levels “with many remaining closed at a 100% reduction in revenue.”

It said that job losses in the restaurant industry as a whole account for more than a quarter of the increase to the U.S. unemployment figures since February.

His bill, the Real Economic Support That Acknowledges Unique Restaurant Assistance Needed to Survive (RESTAURANTS) Act of 2020, is one of several pieces of legislation that have been in the works in recent weeks, including one that would extend the time period to use Paycheck Protection Program (PPP) loans to 16 weeks from the current eight weeks. That bill also would expand what the loans could be spent on.

The research report indicated that the $120 billion stabilization fund would end up contributing at least $248 billion to the economy.

The report also highlighted restaurants’ contribution to society. It found that more than half of restaurant employees are women, and that the industry employs more than one million single mothers, that 60% of chefs are minorities, and that minorities also make up 53% of “bussers, runners, baristas, prep cooks, dishwashers and kitchen porters.” It also found that restaurants employ more minority managers than any other industry.

It also found that the restaurant industry helped people enter the workforce by employing young people and those transitioning out of incarceration or other institutions.