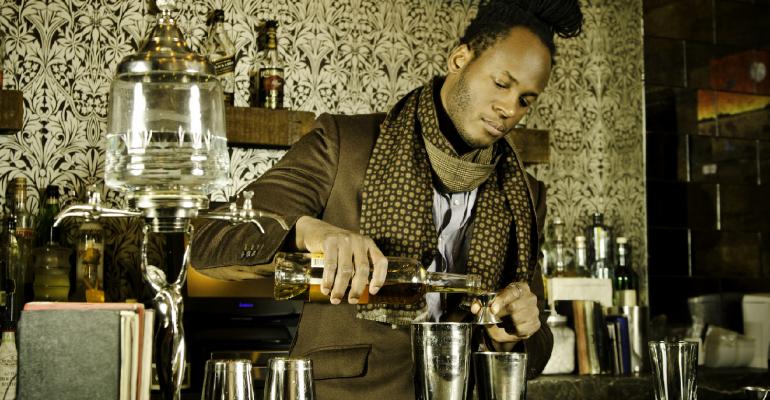 Karl Franz Williams said that much of his black restaurant community’s challenges both during and even before the pandemic come down to lack of access to capital.
Coronavirus>Restaurants Ready

How COVID-19 has accentuated the racial divide in restaurant ownership, according to restaurant and bar owner Karl Franz Williams

Karl Franz Williams, the owner 67 Orange Street in Harlem, New York and the Anchor Spa in New Haven, Conn. on why access to capital represents is a racial issue in the restaurant community

According to recent data from the Federal Reserve, the number of black-owned businesses dropped by 41% in April, as compared with the overall number of 22% of American businesses lost during the COVID-19 pandemic, a disparity of nearly 100%. Karl Franz Williams, a black restaurateur and owner of 67 Orange Street in Harlem, New York and the Anchor Spa in New Haven, Conn. backed up these stark statistics with his own observations: that black restaurant owners have been struggling much more than their white colleagues over the past several months.

“I have seen a lot of restaurants around me [in Harlem] close,” Williams said. “The four restaurants on my block: one is closed forever, the Chinese restaurant next to me is limping along and an Ethiopian restaurant that also closed, I don’t know if they will ever reopen but I don’t see the owner around anymore.”

He said that much of his black restaurant community’s challenges both during and even before the pandemic come down to lack of access to capital. Taking into consideration that on average, white families having a net worth of nearly 10 times ($171,000) than a black family ($17,150), oftentimes black business owners do not have the credit score or banking relationship needed to secure a Paycheck Protection Program, EIDL loan, or other financial assistance.

“One of the issues that started to come out is a lot of businesses did not get PPP funds and some of them were unable to make it until the second round of PPP,” Williams said. “For those that did get PPP, the amount that you get is based on the number of employees you have,” insinuating that for many small black-owned businesses, their smaller staffs could have hurt their chances of securing enough loans to get by.

Learn more in our video below: