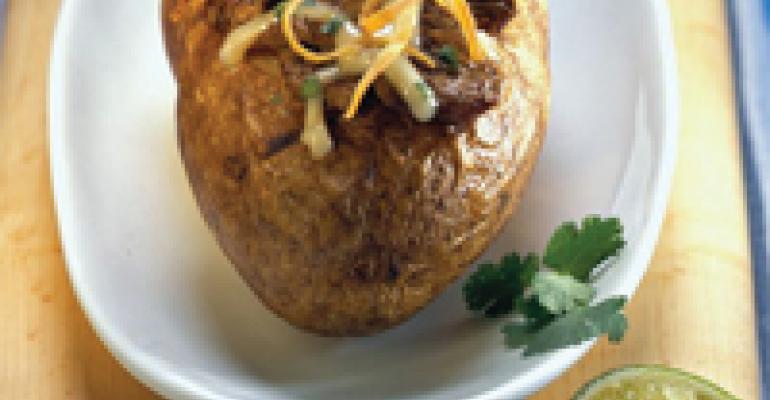 Bake the potatoes in a preheated 375°F oven for 1 hour, or until cooked through.

Prepare the marinade. In a bowl large enough to hold the steak, whisk together all the marinade ingredients until the salt is dissolved. Add the sliced steak and marinate for about 20 minutes prior to cooking.

In a mixing bowl, combine flour, salt and white pepper.

Cut both ends off the onion. Peel and cut the onion in half lengthwise, then again into thin slices. Add onions to the flour mixture and fully coat with the mixture. Set aside.

While the potatoes are in the oven, heat the oil in a large sauté pan. Shake excess flour from the onions, add to the hot oil and fry until crispy (or, alternatively, deep-fry). Do not over crowd the pan. Fry in two batches, if necessary. Drain on paper towels and set aside.

Drain off excess marinade from the meat and grill steak on a preheated grill for 2 to 3 minutes. Place the steak into the crispy hollowed out potatoes; it should overflow slightly. Top each potato with 2 ounces of cheese and return to the oven just long enough to melt the cheese.

Remove from the oven and garnish with onions and cilantro. Serve immediately.