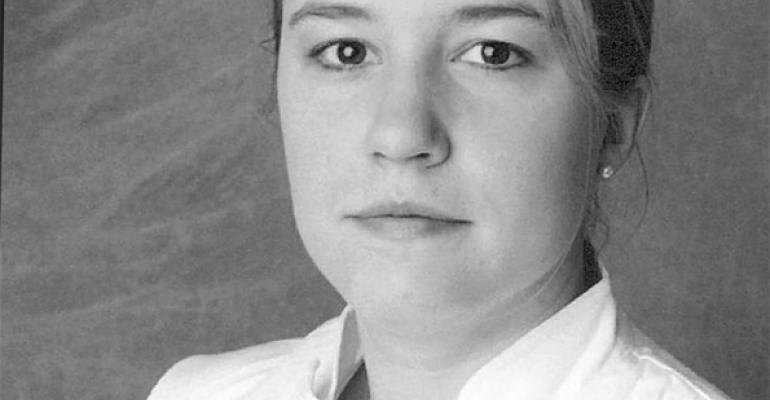 During our search to identify up-and-coming culinary talent, we often find ourselves marveling at the restaurants where these rising stars toil. The decorators of these places are stars in their own right, and the results of their efforts must intimidate young talent. Am I worthy to cook in a place this beautiful, this cool? If those thoughts ran through the mind of Sarah Schafer at Frisson in San Francisco, they are most surely long gone by now.

Schafer is no stranger to beautiful restaurants. She cooked in New York with Tom Colicchio at Gramercy Tavern and with Kerry Heffernan at Eleven Madison Park. She also worked the stoves in her native Boston at Tosca, alongside Ken Oringer.

In all these places, however, she was riding shotgun next to big names who were behind the wheel. That, too, was the case at Frisson, where she was chef de cuisine behind the highly regarded Daniel Patterson. But in February, Patterson moved on and Schafer was given the keys to drive.

While Patterson chose to steer Frisson to the edge with foams, essences and aromas, Schafer maneuvers her menu along a more friendly, approachable route. Michael Bauer of the San Francisco Chronicle described her roast beef loin as "the best prime rib I could imagine," while Gayot wrote that her slow-cooked chicken for two is "the not-to-miss dish." Clearly, Schafer knows the way.