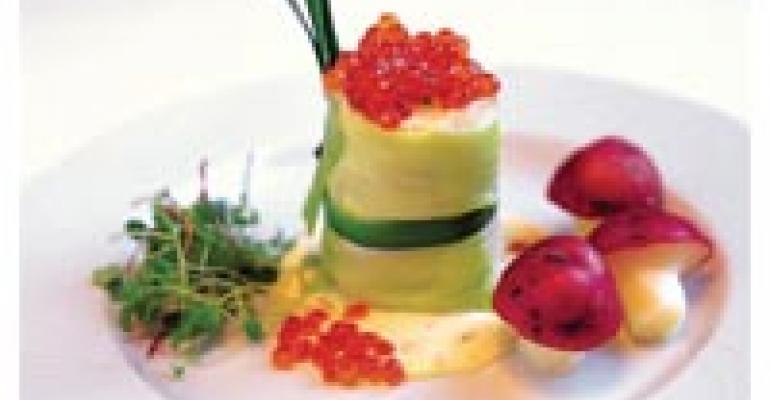 This recipe took Entree of the Year honors at the 2009 Philly Cooks! Chef Competition.

1 large leek, trimmed and cut in half, separating green and white parts

For stuffing: Melt butter in small saute pan over medium heat. Add onions; saute until translucent. Stir in bell peppers; saute until softened and any liquid released has evaporated, about 2 minutes. Remove from heat; cool completely in refrigerator.

Score skin side of each trout fillet (the side formerly covered with skin) several times, using paring knife. Season with salt and white pepper. Place stuffing in center of each fillet and roll ends securely around it. Peel back the layers of cooled white part of leek, wrap one or two layers around each fillet and secure with strip of green leek, tying it in a knot. Set assembled paupiettes aside momentarily.

Add wine to deglaze, stirring with wooden spoon to loosen any browned bits on bottom of pan. Place paupiettes in pan; cover and cook over high heat for 2-3 minutes. Reduce heat to medium; simmer until trout is fully cooked but still tender, about 7-10 minutes. Do not overcook. Trout is fully cooked when it appears opaque.

Remove paupiettes from pan, cover loosely with foil and set aside to keep warm while finishing dish. Place flour and remaining 3 Tbsp. butter in small bowl and knead to form beurre manie. Add cream to pan; stir in beurre manie a little at a time until incorporated and sauce thickens. Add parsley. Set each paupiette on plate, spoon some of sauce atop it, and garnish with salmon roe.