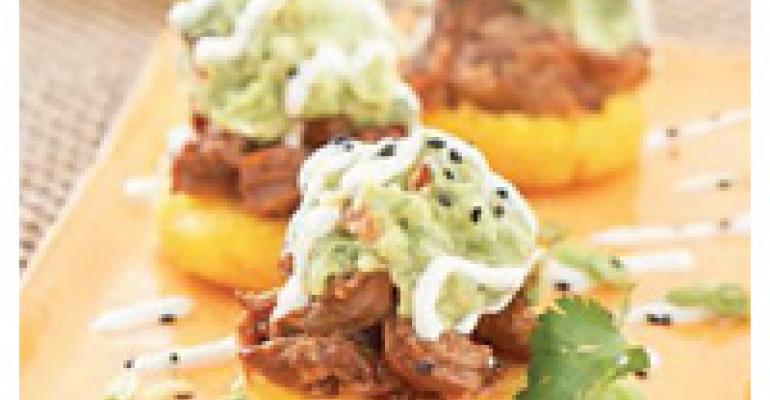 as needed for garnish, sesame seeds

Remove the pork from the liquid and set aside until cool. When cool, pull pork with fingers. Strain liquid and return to cover pork; adjust seasoning. Set pork aside and keep warm.

For arepas: In a bowl, combine ½ cup lukewarm water and 2 tsp. salt. Slowly mix in ½ cup masarepa yellow corn meal until absorbed. It should have a firm consistency. Divide dough into 8 equally sized balls. Roll in the palms of both hands until you form a smooth ball. Press flat into a disc, about 1½ inches thick. Cook both sides over low heat in a nonstick pan until barely browned on each side, about 2 minutes. Cool and reserve.

To assemble and serve: Cut two of the arepas in half sideways and arrange on a plate. Layer each half with a small amount of pork, followed by a teaspoon of guacamole, ½ tsp. sour cream, and top with a slice of jalapeno. Garnish with sesame seeds.