Like many restaurants who needed to adjust their business models, Veljko Pavicevic and his crew started offering curbside delivery, including the newly legal takeout cocktails.
People

“For us, closing was never an option,” said Veljko Pavicevic, the owner of Sails, a fine-dining restaurant in Naples, Fla.

Of course, when he was ordered by the government to close is dining room, he did that, but he felt obligated to keep as much as his staff onboard as he could.

He called a meeting with his staff and told them that he would create work for anyone who wanted to work. 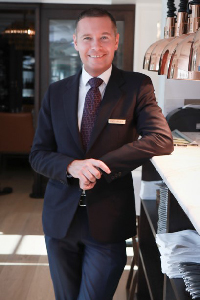 Some of his staff, who came from abroad, returned home. Others chose to shelter in place, but about 40% of his staff stayed on.

So, like many restaurants who needed to adjust their business models, Pavicevic and his crew started offering curbside delivery, including the newly legal takeout cocktails.

He also offered many of his fine wines at a discount.

He solicited donations from local businesses and customers to help him provide meals for hospital workers, and at the time of this interview in late April his team was cranking out 600 of those meals each day.

In this video, Pavicevic also discusses what he has learned during this crisis, and what his plans are for reopening.