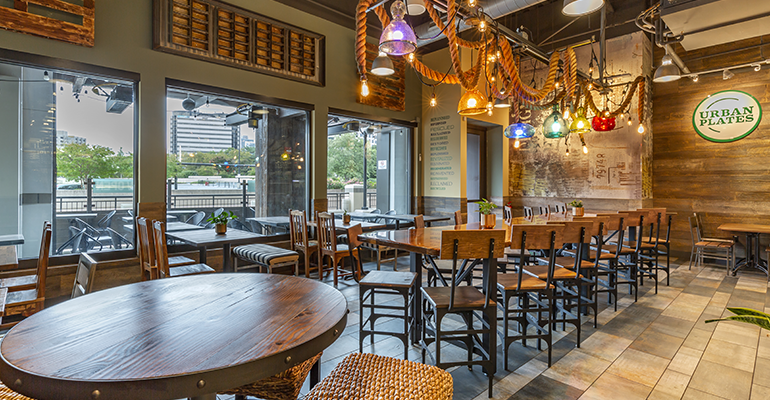 Urban Plates has tapped Steve Greer, formerly with the parent companies of El Torito and Outback Steakhouse, to be the fast-casual brand’s first chief marketing officer.

Greer’s appointment was announced Thursday by the 17-unit company, which plans to double in size by 2021. The company made other executive changes including promoting Jim Cannon to the new role of chief culinary officer. Cannon was previously the brand’s senior vice president of culinary. Alison Wagner, formerly with the parent company of Rubio’s Coastal Grill, is Urban’s new vice president of human resources.

The Cardiff, Calif.-based chain is bolstering its executive leadership a year after closing a $38 million credit facility with Goldman Sachs Specialty Lending Group. Founded in 2011, the cafeteria-style fast casual concept, whose core units are in California, plans to accelerated its growth plan by expanding its footprint in the West and Northeast. It also has three units in the Washington D.C. area.

From left are Steve Greer, Jim Cannon and Alison Wagner.

“You can expect to see us in some major metropolitan areas in the next 24 months," Greer told Nation's Restaurant News in a phone interview late Thursday.

Since starting in July, Greer said he's been getting to know the brand from behind-the-scenes. He said his No. 1 priority will be to share those farm-to-table stories with consumers. For example, the lettuce served in restaurants is harvested 48 hours prior to entering each store.

"I was amazed. The thing is no one knows that," he said.

His marketing strategy will also center on the brand's value, including promoting its seven, chef-crafted plates. The made from scratch dishes, which include sides, cost $10.

"He rolls up his sleeves and works with our suppliers in making sure they live up to the standards we set,” Greer said.

As the brand grows, Wagner will oversee employee recruitment and retention programs. She started in August.

“Urban Plates is prepared for growth,” CEO and co-founder Saad Nadhir said in a statement. “I’m thrilled to welcome Steve, Jim and Alison to the executive leadership team, and I am thankful to add their deep expertise to the Urban Plates family.”

Sept. 12 update: This story was edited to include comments from Steve Greer.

Chefs on the move: Springtime appointments across the country
Apr 07, 2022