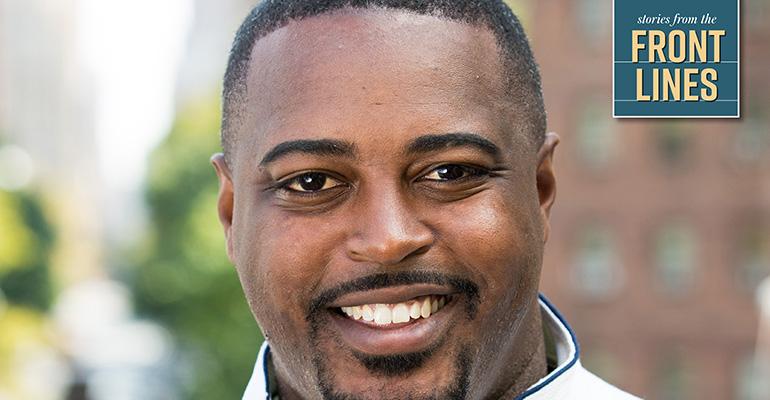 Max Hardy of Coop in Detroit tells Restaurant Hospitality how he's been helping feed the community while his own restaurant remains closed.
People

The chef gets creative with food donations

Detroit native Max Hardy trained in Florida and New York before returning home to operate restaurants including River Bistro, which had a two-year run, and Coop Detroit, a Caribbean restaurant that’s part of the Detroit Shipping Company food hall.

He closed Coop when the coronavirus pandemic hit, and began working with an array of organizations to help feed people in need.

He gets paid for each meal from a partnership between AT&T and World Central Kitchen to prepare meals for front-line workers and groups including the Detroit Rescue Mission, Alternatives for Girls, the Neighborhood Service Organization and Henry Ford Hospital .

“It’s $10 a meal, so if you keep your food cost low you can put a couple dollars in the bank to pay your bills. Or some of them, at least,” he said. “My landlord gave me a break for the past two months, so that’s been helpful, but the other bills don’t stop.”

He’s been making between $2,500 and $5,000 per month doing that, as World Central Kitchen funding is spread out to different restaurants, “to make it fair for everyone.”

“It’s tough to see how this has impacted so many small businesses, and restaurants in particular in the city,” he said.

Hardy laid off all of his staff until late May, when he reopened Coop for curbside pickup and delivery, but his usual customers from the suburbs aren’t coming into the city, office workers are working from home and school’s out at the two universities nearby, so revenue’s down around 85%.

“I’ve been in the kitchen cooking every day. … but it hasn’t been promising like I thought it would be,” he said. “But I’d rather do that than sitting in the house, twiddling my thumbs, worrying and stressing about how to make it work.”

The business he is getting is mostly from family and friends, who have helped drum up traffic via social media.

“I’ve been asking people who come to tag us and share and give us love on social media,” he said.

Hardy’s not sure what reopening’s going to look like when that happens, especially as part of a food hall.

“How do you have that with four other restaurants, communal seating and communal bars? … It’s going to be quite interesting to see how we make it back,” he said.

Meanwhile, Hardy’s getting funding from other organizations, too, including the MGM Grand Detroit casino and a generous donation from the former president of the New York Food Bank so he can buy food to cook. Other restaurant’s, including Kuzzo’s Chicken & Waffles, Bangkok 96, The Block and Flood’s Bar & Grill also help supply food, along with Detroit Rescue Mission, a local urban farm and distributors Sysco and Gordon Food Service.

“Whatever they bring me, I cook,” he said.

“Typically we’ll get product in on Friday or Saturday and I’ll make the menu for the week, and then when people just bring in random product we’ll just pivot and I’ll say, ‘Hey, let’s take this bread and make a panzanella, or bread pudding,’ or ‘Let’s make stuffing for the turkey that somebody brought in’.”

As demonstrations started in protest against the murder of George Floyd by Minnesota police, he started feeding protestors and anyone down on their luck at the bus station.

“I felt bad … hearing about all the crazy stuff that was going on with the police brutality,” he said. “I just wanted to lift their morale.”

But it’s not all gloomy. Hardy said he’s been having fun getting creative with the food that comes in, making do with what he has.