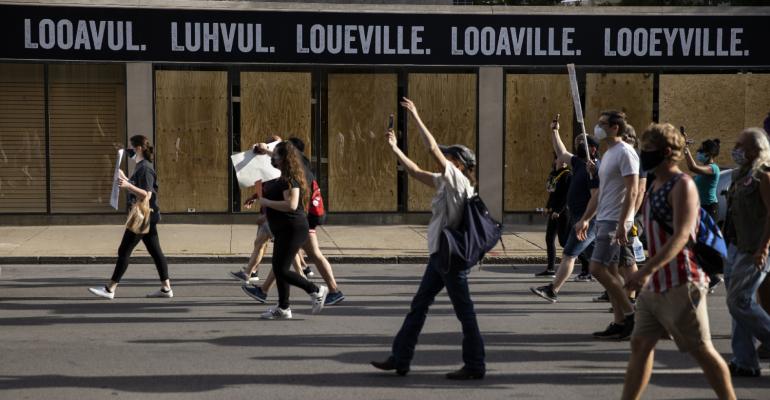 David McAtee, owner of YaYa’s BBQ in Louisville, Ky. was killed in an exchange of gunfire between a crowd and law enforcement

David McAtee, the owner of a popular barbecue spot in Louisville, Ky., was reportedly shot and killed by law enforcement as gunfire broke out during an after-curfew gathering on Monday.

The owner of YaYa's BBQ was known as a “community pillar,” according to his mother Odessa Riley. The 53-year-old McAtee often gave out free food to community members, including police officers, according to local Louisville news station WFPL.

McAtee’s barbecue business is located right next door to Dino’s Food Mart on 26th and Broadway, where a large crowd had begun to form early Monday morning. Although bystanders say that the crowd was not a group of protestors and was actually a weekly community gathering with food and music, Louisville Metro Police released a statement that they and members of the National Guard arrived “trying to break up” a large crowd and defended themselves after someone from the crowd allegedly shot at officers. McAtee’s niece was shot and McAtee himself was killed in the crossfire.

"He left a great legend behind. He was a good person. Everybody around him would say that," Riley told the Courier-Journal, adding that he died protecting his niece. "My son didn't hurt nobody. He didn't do nothing to nobody."

The two police officers involved in the shooting were either not wearing body cameras or had their cameras turned off during the incident, despite the fact that Louisville Metro Police requires officers to wear working body cameras.

The matter is being investigated by city, state, and federal authorities and Louisville mayor Greg Fischer announced Monday that the police chief would be stepping down in June, according to the Courier-Journal, following the killing of 26-year-old Breonna Taylor.

In February, McAtee told photo blog West of Ninth that he had opened his barbecue shack a couple of years ago and that it was his dream to buy out the lot and build a brick-and-mortar restaurant.

In the interview, McAtee said that he has 30 years of experience in the food business and lived in Louisville before moving to Atlanta and coming back after 20 years.

“I’ve been shot and robbed since I’ve been back. I was living a crazy lifestyle, but I had to give it up,” he said. “I have always been blessed with the skills to cook. I didn’t need anything else. People have to eat every single day, and all I need is my skills.”

The killing of George Floyd by a Minneapolis police officer has sparked national outrage, with both peaceful protests and incidents of looting and property damage continuing in various cities across the country. Many in the restaurant community have spoken out in support of protesters, despite the fact many businesses have been physically damaged from multiple nights of unrest.

“The price we pay for freedom, or just a few thieves taking advantage of someone else’s struggle?” New York City café C&B wrote on their Instagram page, after posting photos and video footage of their smashed glass door and damaged property. “Well if this is the price we have to pay for human rights, so be it.”