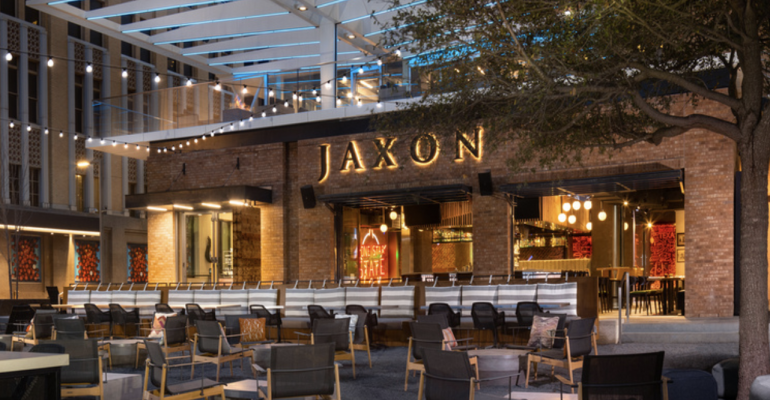 How Jaxon quickly went from no delivery system to exclusively delivery in Dallad when coronavirus struck.
People

Kevin Lillis on how crisis can spur creativity

“Social distancing has been the opposite of what my focus has been my whole career,” said Kevin Lillis, reflecting the condition that many people in the hospitality industry are in. Their job is normally to bring people together.

That’s what Lillis was trying to do in late February, when he began the soft opening of Jaxon Texas Kitchen and Beergarden, the first phase of a development of AT&T’s Discovery District headquarters campus in Dallas. It’s next to a 35,000-square-foot food hall that Lillis is also overseeing and that was scheduled to open later on, but of course those plans have been put on hold in the face of the COVID-19 pandemic.

Related: How Kevin Lillis adapted when the coronavirus forced Jaxon restaurant in Dallas to close right after it opened

Jaxon officially opened in early March, serving barbecue and other Southern comfort food, and before the staff even got their feet under them, Lillis, like all other restaurant operators, had to close his dining room as stay-at-home orders were put in place to try to limit the spread of the novel coronavirus that had swept the planet.

Lillis is a big-picture guy. He’s the CEO of Hospitality Alliance, a management, development and consulting firm for hotels, restaurants, bars and property developers. Among other things, his company is overseeing the planning for redevelopment of a 200,000-square-foot complex on the waterfront of Jersey City, N.J., and is managing an 18,000-square-foot food hall in Fort Worth, Texas, that Fort Worth Magazine named the best new restaurant in the city.

At Jaxon, with its main customer base of AT&T employees working from home, Lillis and his team shifted quickly to delivery.

Delivery had always been part of Lillis’ plans, of course. It’s 2020, after all, and Americans, for whatever reasons, had already been staying at home more, anyway, watching Netflix and other streaming video services and ordering whatever they needed to be brought to their doorsteps, including food.

In many ways, the pandemic has accelerated consumer behavioral trends that were happening anyway. But now operators have needed to get better at responding to those trends, and they’ve had to do it immediately.

So of course Lillis started delivery, often with managers driving orders to customers’ homes themselves. Thanks to quick action by the Texas government, which like many governments relaxed liquor laws to allow beleaguered restaurants to deliver it, many of Jaxon’s orders included 375-milliliter bottles of alcohol, and maybe some groceries.

Lillis said he saw supermarkets run out of produce, eggs and bread as consumer demand shifted from restaurants to retail faster than the supply chain could keep up.

“We were still getting plenty of produce,” he said.

So, like many operators across the country, Lillis and his team started putting together grocery boxes with fruit, vegetables and staples and selling them for $45.

Lillis and his team did other things to keep his staff busy, too — he managed to secure a Paycheck Protection Program loan, so they had to stay on the payroll — and to keep his customers, and potential customers, engaged.

“Our first week, it was a bit of a learning curve, because a lot of our people had never worked in a delivery concept,” Lillis said. But they adapted quickly.

With construction complete on the food hall next door, the Jaxon staff used it as a staging area for delivery and pickup orders, with food stored in hot, cold or warm boxes as appropriate and runners putting the orders together.

A lot of those orders were family-style meals — a large entrée and sides for 4-6 people — which have quickly become a customer favorite in restaurants across the country, and which, Lillis pointed out, are easier to assemble given social distancing requirements at the restaurant, than individual meals would be. He has one person focus on preparing the main protein, and another working on sides at least six feet away.

“Family meals was what people wanted, anyway, but it was also good for social distancing,” he said.

That’s another trend that the pandemic has accelerated, Lillis said: People were already sharing food in restaurants, passing around small plates or eating family-style. Now they were doing it at home, both for people who are quarantining together, and for those conversing at a distance via video platforms such as Zoom.

He said customers were ordering food to be delivered to different places and then eating together virtually, creating their own dinner parties at a distance, and using the food as a conversation starter.

Although Jaxon was allowed to open its dining room on May 1, at 25% capacity, Lillis says he plans to create those virtual dinner parties for customers who want it.

“That’s absolutely something that we’re going to be doing,” he said, adding that he might also introduce cooking classes, for which meal kits are delivered to customers and then they all can tune into the class via video conferencing.

Lillis said the stay at home orders have forced operators to figure out how to foster social relationships while being physically apart — something they could have been doing for years.

“I think that’s something that our society desperately needs,” he said.

“I’ve probably talked to people that are in other locations around the country more than I would otherwise,” he added. And that’s helped him realize something important. “Breaking bread doesn’t have to be with someone sitting across the table from you.”

Listen to the full podcast here >>