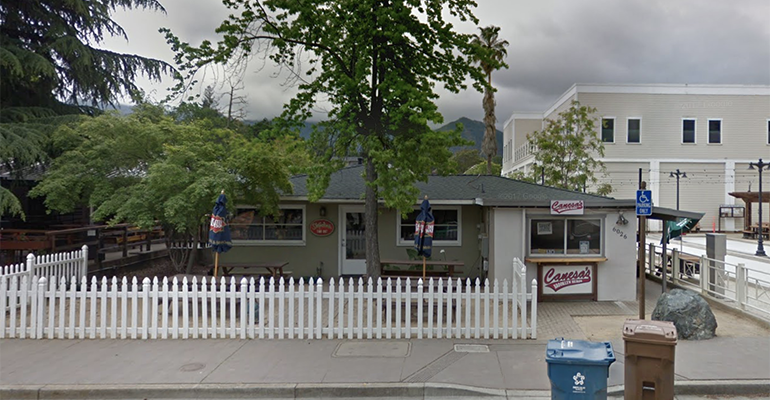 Canesa’s Brooklyn Heros owner touts free side when guests say, ‘send her back’

Restaurants are increasingly jumping into the political fray.

In the most recent example, Canesa’s Brooklyn Heros — a Clayton, Calif.-based sandwich shop — has come under fire after owner John Canesa said his restaurant would offer a “free side when you say, ‘send her back!’” on his personal Facebook page. The offer refers to xenophobic statements made by President Donald Trump about Rep. Ilhan Omar, D-Minn., a Somali-born Muslim, and three other Congresswomen of color.

Related: Opinion: What the political environment means for workplace issues

It was the latest in an ongoing series of incidents involving restaurants on both sides of the political fence. In June 2018, Lexington, Va.-area restaurant the Red Hen asked then-White House press secretary Sarah Huckabee Sanders to leave because of her role promoting “inhumane and unethical” Trump administration policies, according to a later statement.

That month, Homeland Security Secretary Kirstjen Nielsen was also chased out of a Mexican restaurant by protesters.

Earlier this year, Donald Trump’s son Eric Trump, was reportedly spat on by an employee at Chicago bar, The Aviary in June. Although the Aviary — operated by the Chicago-based Alinea Group co-owned by the acclaimed chef Grant Achatz and Nick Kokonas — distanced itself from the employee by stating that the “degrading act lowers the tenor of debate.” 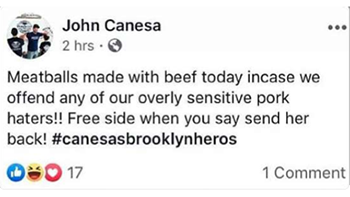 In Canesa’s case, the promotion was seen as both racist and Islamophobic on social media. His original Facebook post — which has since been deleted — read, “Meatballs made with beef today incase [sic] we offend any of our overly sensitive pork haters! Free side when you say send her back! #canesasbrooklynheros.”

The Facebook post was a reference to the “send her back” chant that was sparked at a recent Trump rally in North Carolina. The chant followed a series of racist tweets by President Trump on July 14 telling Omar and three other progressive Democratic Congresswomen to “go back and fix the totally broken and crime infested places from which they came.”

All of the women are American and three were born in the U.S. The tweets were roundly criticized by lawmakers, and House Speaker Nancy Pelosi called the statements “xenophobic.”

Canesa’s Facebook post went viral and prompted a significant social media backlash . One Facebook reviewer posted, “I had no idea about the sexist, racist, hard-hearted beliefs of your owner. I hope this backlash is a wake-up call.”

Canesa, however, seemed to enjoy the attention. In response to a Facebook comment saying, “it’s disappointing to see racism in our own community,” Canesa replied, “65 free sides so far! Come and get it we are about to sell out. I have to post more often!”

Canesa originally posted a response video, but it has since been deleted. Canesa’s personal Facebook page has either been deactivated or was made private in the wake of the backlash.

Canesa’s Brooklyn Heros did not respond to request for comment.

Canesa is not the only restaurant owner to respond to Trump’s “send her back” comments.

The Scullery — a breakfast café and coffee shop in Greenville, N.C. — held a fundraiser July 17 for the American Immigration Council after the Trump rally. In total, the restaurant raised $5,600 for the immigrant rights organization.

“Our donation from last Wednesday was made in order to celebrate our wonderfully diverse nation, and to help with the crisis at our border,” owner Matthew Scully said. “We are all immigrants, and we need an immigration system that works, and that treats people with dignity and respect. It has been amazing to see the response that our small gesture has received. It is obvious to me that we're all hungry for something different.”