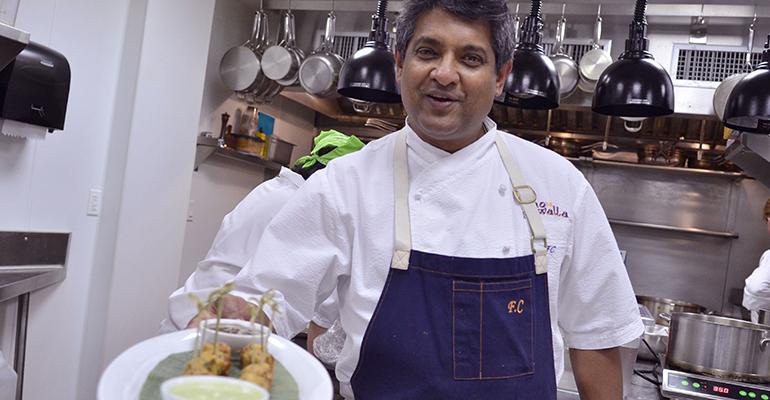 Floyd Cardoz, 59, died of complications due to novel coronavirus after being admitted to the hospital in New York City

Floyd Cardoz — the Mumbai-born chef known for his modern Indian cuisine and groundbreaking restaurants Tabla and Bombay Bread Bar — has reportedly died from complications due to novel coronavirus, according to Indian publication Scroll.in.

Cardoz, 59, is the first high-profile chef to die from the virus that has become a global pandemic. He was admitted to the hospital in New York City on March 18 after feeling feverish, following a trip to Mumbai earlier in March, according to a statement Cardoz posted on Instagram on March 18.

The prolific chef’s hospitality group, The Hunger, Inc. released a statement on March 17 confirming his hospitalization after he came down with coronavirus symptoms including as viral fever.

Related: Communicating during the coronavirus crisis—experts suggest looking to the future

As news broke of Cardoz’s death early on Wednesday morning, fellow chefs, personal friends, and fans of the chef’s culinary achievements began posting eulogies and memories on Twitter, including Danny Meyer, who was Cardoz’s first major employer in the restaurant industry:

Love you so much @floydcardoz

Floyd Cardoz was an exceptional talent, a chef equally at home with undiluted Indian flavors as he was with the delicious union of French, Indian and American food, a personal idiom that he invented. https://t.co/7NcTes1D01

.@floydcardoz made us all so proud. Nobody who lived in NY in the early aughts could forget how delicious and packed Tabla always was. He had an impish smile, an innate need to make those around him happy, and a delicious touch. This is a huge loss... pic.twitter.com/Q6eRVIpZkL

Floyd. You were a gem. You were an amazing human and chef. You were a father and husband full of love and grace. I am so sorry. I love you. Rest in Peace my friend. #floydcardoz

Nation’s Restaurant News has reached out to Floyd Cardoz’s team for a statement.