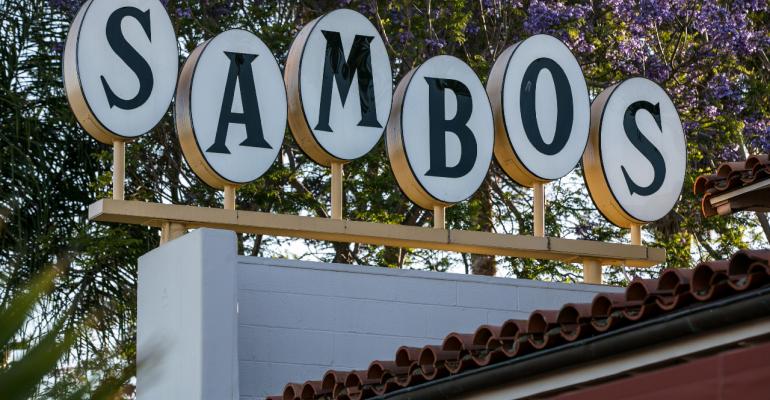 George Rose / Getty Images News
Current owner Chad Stevens made the decision to change the name of the restaurant.
People

Chad Stevens, owner of the last Sambo’s restaurant in America, on changing his restaurant’s controversial name in wake of Black Lives Matter protests

Sambo’s began in 1957 as a family dining restaurant in Santa Barbara, named for owner Sam Battistone and at its peak had 1,100+ restaurants, all themed after the controversial Little Black Sambo children’s book character. Now, more than half a century later, only one Sambo’s restaurant — the flagship — is left, and the restaurant has recently reckoned with its promotion and celebration of the racist character.

“Even though it’s a happy story about a child I understand the implications of it and change needs to be made,” Stevens said. “I had never heard the name Sambo used in a [derogatory] way but I understand that, so we needed to move forward.”

Although the restaurant formerly known as Sambo’s does not yet have a new name, Stevens has temporarily created a peace and love sign in place of the original Sambo’s sign to show their dedication to evolving with the times.

In this video, Stevens discusses the history of his grandfather’s restaurant empire and his how he came to realize that even though the theming of his restaurant was created with innocent intentions, he strongly believes that moving forward, even through the difficult process of rebranding a well-established company, is the right thing to do.