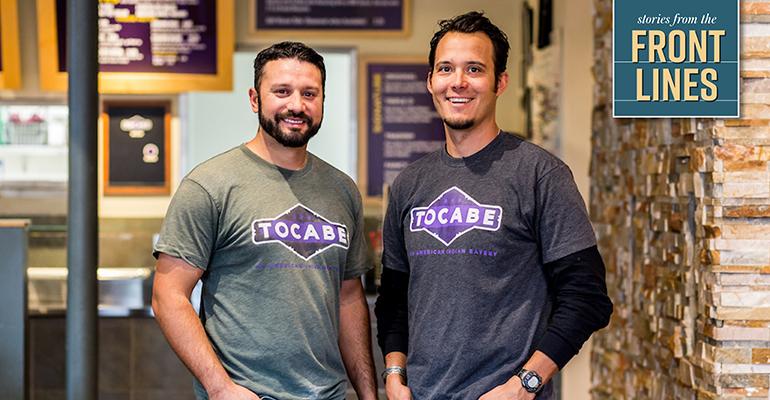 Ben Jacobs and Matt Chandra had to rethink their entire business model when stay-at-home orders were issued in Colorado as the novel coronavirus pandemic arrived.

“Our goal was to do everything we could, at first, to stay open,” said Jacobs, co-owner of Denver-based Tocabe, a fast-casual restaurant focused on Native American food that has two units and a food truck. They tried to do deliver food themselves, they attempted a partnership with third-party delivery company DoorDash “because that was the point that they weren’t doing any commissions.” They also tried curbside pickup. But sales were still down by 85%

“We were still down so far, and we decided for people’s health and safety it was just not worth it,” Jacobs said.

So they closed on April 3 and didn’t reopen until June 3, when Paycheck Protection Plan money came through and they could hire back 14 of their 40 employees.

“Matt and I discussed what were our options, because neither of us saw the industry coming back to any normality anytime soon. And the thing that was really an additional kind of gut punch for us was we had just completed franchise documentation. We were working on some partnerships with some different tribal communities on doing some expansion through that. So that has all been set aside,” said Jacobs, who is a member of the Osage Nation in Oklahoma.

The restaurants are doing limited business, with 17 seats inside instead of 50, and 14 seats outside.

“Obviously it’s hard to make it with that,” Jacobs said, adding that they also suffer from lack of tourists, who would swing by their north Denver location on the way to the mountains.

“So our next evolution is we’re working on partnering with Native producers to do private label packaging for pantry staples — blue cornmeal, yellow cornmeal, wild rice, different variations of beans, plus our own proprietary dry rubs and barbecue sauce,” Jacobs said.

They’re doing research & development of oven-ready meals for sale in retail, which they hope to have up and running by the end of the year or early 2021.

“We had to get our entrepreneurial hats back on and reinvigorate our excitement of what we were going to do for our company to thrive,” Jacobs said. “And also we felt like we owe something not only to our community but also to the Native food producers, to find a way that we can all create a sustainable structure so we can continue moving forward.”

They’ve already shipped some of their bison ribs to family and friends for feedback. They’re cured, vacuum sealed and frozen with barbecue sauce — currently being made with seasonal huckleberries from the Muckleshoot nation of Washington State.

The ribs are Tocabe’s most popular menu item, followed by wild rice bowls — customizable in the assembly-line style of fast-casual restaurants. They’re figuring out the best way to ship those, whether refrigerated or frozen. Jacobs said they’ll probably be frozen so they can be sent to rural tribal communities.

They’re also working to figure out a model that allows customers to buy one meal for themselves and send one automatically to someone else, whether that’s a specific person in need or a food bank or other charity.

“The goal is to make the food accessible and get it to the people who need it,” he said. “We believe that it can be done, because we have a solid fan base not only locally but we do have that around the country from the native and non-native community alike.”