A chef could do worse than launching a career at Santa Fe’s iconic Coyote Café. That’s where Weiss got her start, moving from there to several Ritz-Carlton properties, punctuated by an appearance on Bravo’s Top Chef and from there to back to her California and NINETHIRTY and The Backyard at L.A.’s W Los Angeles. Last year she partnered in launching Sweetfin Poke, a fast-casual Hawaiian soul food concept; and Estrella, a bohemian Sunset Strip restaurant, both in L.A.

Despite their youth (27 and 26, respectively), these two have seen more than 22 years in hospitality. Ross raised his game cooking at the likes of Thomas Keller’s Ad Hoc and the Restaurant at Meadowood; Nova has learned a thing or two about wine and achieved advanced sommelier status, which explains the 1,900+ labels in 1313’s cellar. Together, they aim to show diners that a great meal can be affordable.

Despite their youth (27 and 26, respectively), these two have seen more than 22 years in hospitality. Ross raised his game cooking at the likes of Thomas Keller’s Ad Hoc and the Restaurant at Meadowood; Nova has learned a thing or two about wine and achieved advanced sommelier status, which explains the 1,900+ labels in 1313’s cellar. Together, they aim to show diners that a great meal can be affordable.

“Dessert ought to be mandatory,” said Washington Post reviewer Tom Sietsema in his review of The Grill Room. “Chin is one of the region’s finest sweet makers.” She’s created believers with creations like Pretty in Pink, a spring special that leverages rhubarb in multiple ways; and an ode to chocolate that consists of an intense milk chocolate mousse set on a sliver of devil’s food cake, garnished with brown butter ice cream and a thin hoop of chocolate.

The Lawless sisters grew up in the business, first helping out with the family’s pub in Galway, Ireland and then in Chicago, where they eventually worked in management at other family ventures, including The Irish Oak, The Gage and Acanto. Now it’s time for the pair to shine at their own spot, The Dearborn, which they expect to open in Chicago’s loop district this summer.

Wise beyond her 24 years, Stachon sources ingredients and cooks with the diligence and thoughtfulness of an old pro. She’s come a long way her early days in Greek diners, followed by formal culinary training, then butchery work at Chicago’s Publican Quality Meats. Tapped as sous chef at Ada Street when it opened in 2012, Stachon was part of the team that achieved Michelin Bib Gourmand status for the cozy eatery. Named executive chef last fall, she plans to put her butchery skills to good use making in-house sausages, terrines and more.

Meyer not only reigns as head pizza maker at what Forbes magazine calls the “Best Pizzeria in America,” she also coordinates the school schedule and teaches at master instructor Tony Gemignani’s International School of Pizza. She’s also captured titles for her pan pizza and non-traditional pizza creations at international competitions.

Compton fell in love with the Big Easy while filming Top Chef there and returned to open her own restaurant there last year. She cooks “new New Orleans”-style food with a Caribbean/French-leaning menu grounded in the city’s rich culinary culture. For her efforts, Compton recently scored “Chef of the Year” honors from Eater NOLA.

After a decade sharpening his skills and developing his own style at some of the top restaurants in the U.S. and Europe (Quince, San Francisco; Frasca, Boulder, CO; Brooklyn Fare, NYC), Sippel is poised to open his own spot near New York’s Madison Square Park. Italienne will have dual personalities: an old world-style restaurant with four-star service and cuisine and a tavern serving as a café during the day and a wine bar at night. And he’s drafted some of his former Frasca teammates along to play.

King’s passion for traditional bread making stands to alter how many pastry chefs and breadmakers view the craft. She’s in the midst of The Great Midwestern Bread Experiment, a three-year collaboration with crop scientist Stephen Jones of Washington State University and a fifth-generation Midwest farmer to produce loaves of bread as they were created in the early 20th century.

Some credit Kelly as the main force behind the revival of Cincinnati’s culinary scene. Under his direction, the AAA five-diamond Orchids has tackled a variety of signature programs, from cheesemaking to American caviar harvesting, sourcing honey from the property’s rooftop apiary, culturing butter in-house and collaborating with a local brewer to create custom brews for the restaurant.

Rudolf, formerly director of operations for the Thomas Keller Group, founded Journee as a restaurant industry think tank, a way to bring people together to learn how to succeed. For a $1-a-day fee, members have access to a variety of classes on subjects ranging from leadership to budgeting, wine and coffee and motivating managers.

Nodler has been on a run: recognition as a semi-finalist for a James Beard Award for Rising Star Chef, High Street on Market captured the Philadelphia Inquirer’s Restaurant of the Year award in 2014 and Travel + Leisure named High Street one of the best new restaurants in the world last year. Expect more mouthwatering breads, sandwiches and more from the latest High Street, recently opened on NYC’s Hudson Street. 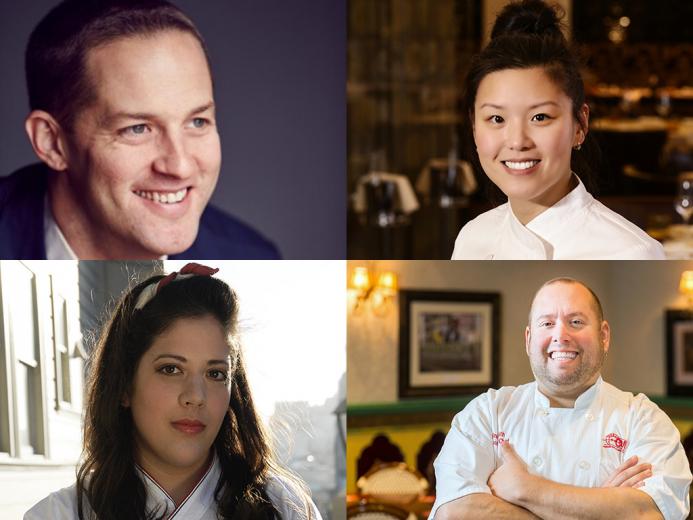