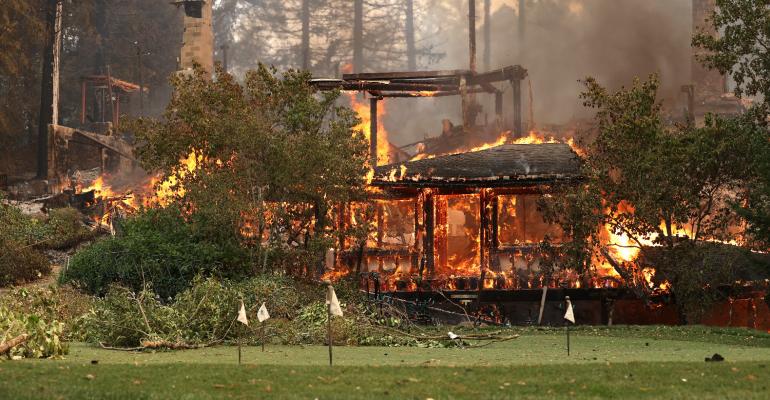 The restaurant, along with multiple wineries, bed and breakfasts, and homes have been damaged or destroyed in the Glass Fire

Three-Michelin-starred The Restaurant at Meadowood, as part of the 250-acre Meadowood Resort in St. Helena, Calif. was the latest casualty of the fires rampaging through California. The fine-dining restaurant burned to the ground Monday in the so-called Glass Incident fire, which began on Sunday as three smaller fires merged and scorched 66 miles of California’s famed wine country in Napa and Sonoma Counties, according to NBC News. The fire is currently one of 30 burning throughout the state and has thus far claimed three lives, according to Shasta County Sheriff Eric Magrini.

The fire has so far caused tens of thousands of residents to evacuate and destroyed more than 48,000 acres and seven wineries including the Chateau Boswell Winery and a bed and breakfast, the Black Rock Inn, according to Eater.

The Restaurant at Meadowood was eulogized in a social media statement on the restaurant’s Instagram page:

“We are all torn apart,” the statement from executive chef Christopher Kostow said. “A eulogy is deserved and will be given in due time...for now, I want to thank all of the TRAMily that have ever graced this magical space—and all of the guests over the years who have enjoyed the efforts of these multitudes. What an honor it has been. Martina and I wish our broader, Napa community safety and courage during this devastating time.”

Photos being shared on Twitter show the extent of the damage the former restaurant sustained during the fires:

#meadowood across the valley from St Helena. I just left there...they couldn’t save it. :(. #glassfire pic.twitter.com/rFVCbGrndD

The restaurant at the iconic Meadowood Napa Valley Resort. The last time I was anywhere near here I was covering George W. Bush's stay. This also is the site of Auction Napa Valley. Huge loss. #GlassFire pic.twitter.com/8RwVg1Y7kq

Guests and staff of the resort were evacuated on Sunday before the fires reached the property early Monday morning. By the time firefighters arrived on the scene around 3 a.m., the resort was already engulfed in flames, Fire Capt. Matt Dowland told ABC 7.

The entrance to #Meadowood restaurant in Napa Valley. #GlassFire pic.twitter.com/YD9Tr3CxxT

"We're going to reopen," Bret Anderson, a representative for Meadowood Resort’s parent company told the East Bay Times. "And we believe that the Napa Valley, as it has in the past, will experience a renaissance after this."

As of Wednesday morning, the Glass fires were 2% contained, according to Cal. Fire, with more than 70,000 residents still under evacuation orders.

This Washington, D.C. taqueria received the first Restaurant Revitalization Fund grant: this was their experience
May 13, 2021