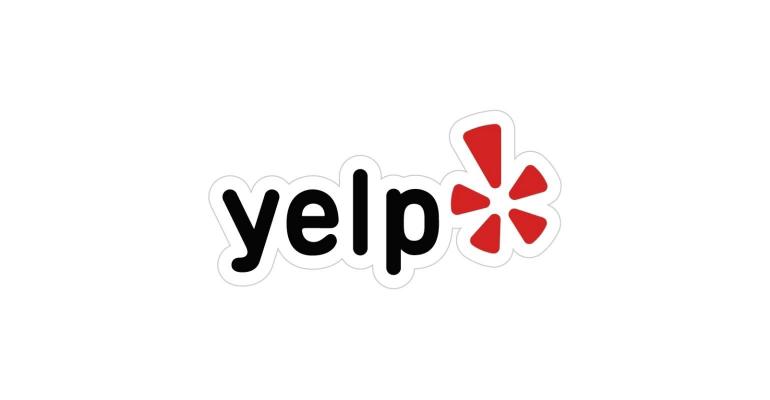 Yelp allows users to call out businesses for racist conduct

Yelp on Thursday outlined plans to allow consumers to call out businesses for racist conduct.

“As the nation reckons with issues of systemic racism, we’ve seen in the last few months that there is a clear need to warn consumers about businesses associated with egregious, racially-charged actions to help people make more informed spending decisions,” the company said in a blog post. The alerts are also designed to help users make decisions about whether they will be welcome and safe at a particular business.

The consumer-driven review site already places alerts on business pages when there is an unusual uptick in reviews based on incidents seen in the news or on social media, rather than on a first-hand experience, Yelp said. Those alerts can appear for days or weeks, which is determined on a case-by-case basis.

“When a business makes the news, people often come to the business’s Yelp page to express their views,” a spokesperson said. But, after that activity stops or slows down, moderators clean up the page to ensure only first-hand experiences are reflected.

Now when an incident involving racism occurs, Yelp said it will “investigate” and temporarily disable the content, placing a general “Public Attention Alert” to inform consumers that someone associated with the business was accused of — or is the target of — racist behavior. 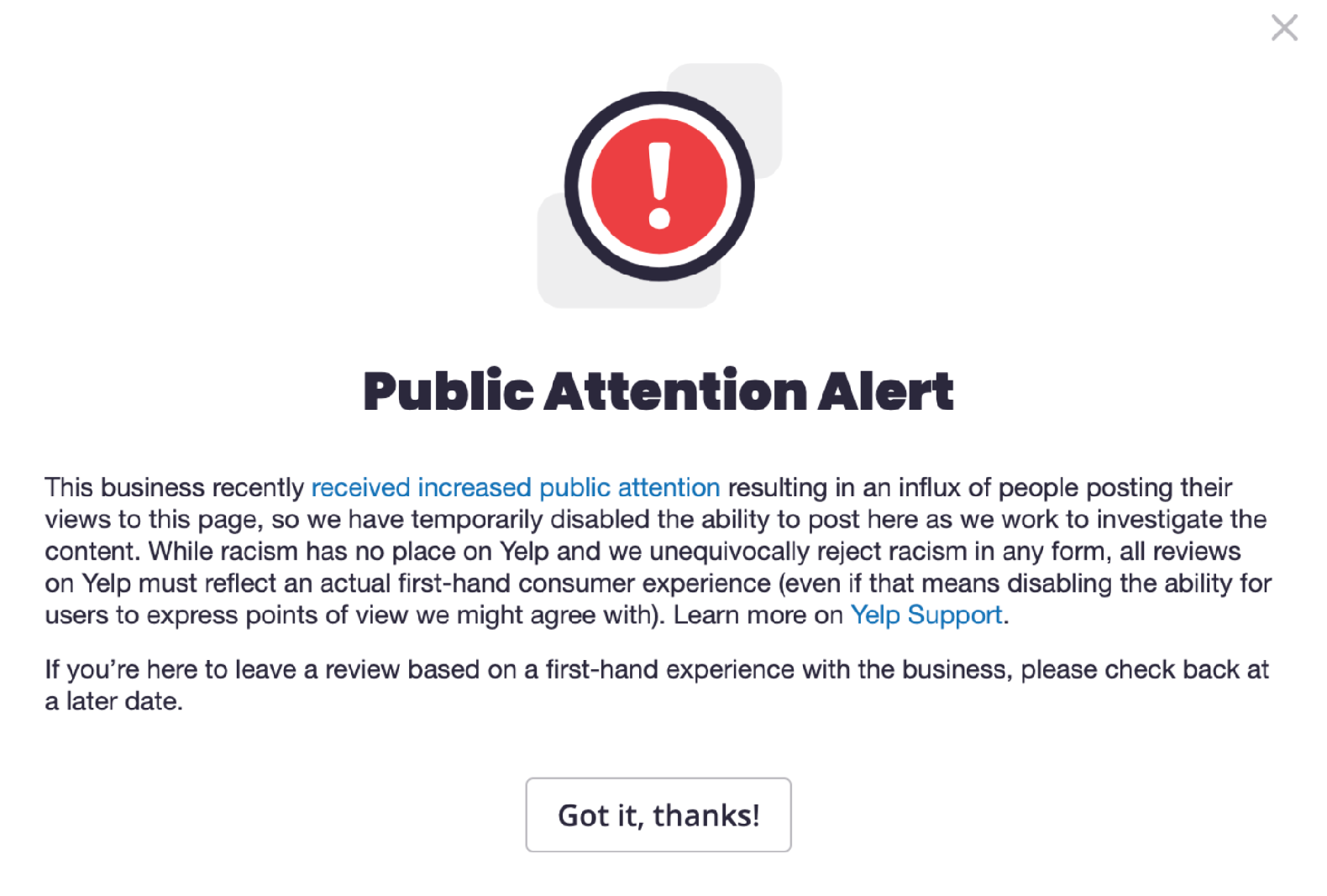 When there is “resounding evidence of egregious racist actions from a business owner or employee, such as using overtly racist slurs or symbols,” Yelp will escalate to posting a “Business Accused of Racist Behavior Alert” on their review page, along with a link to a news article from a “credible media outlet” for users to learn more about the incident. 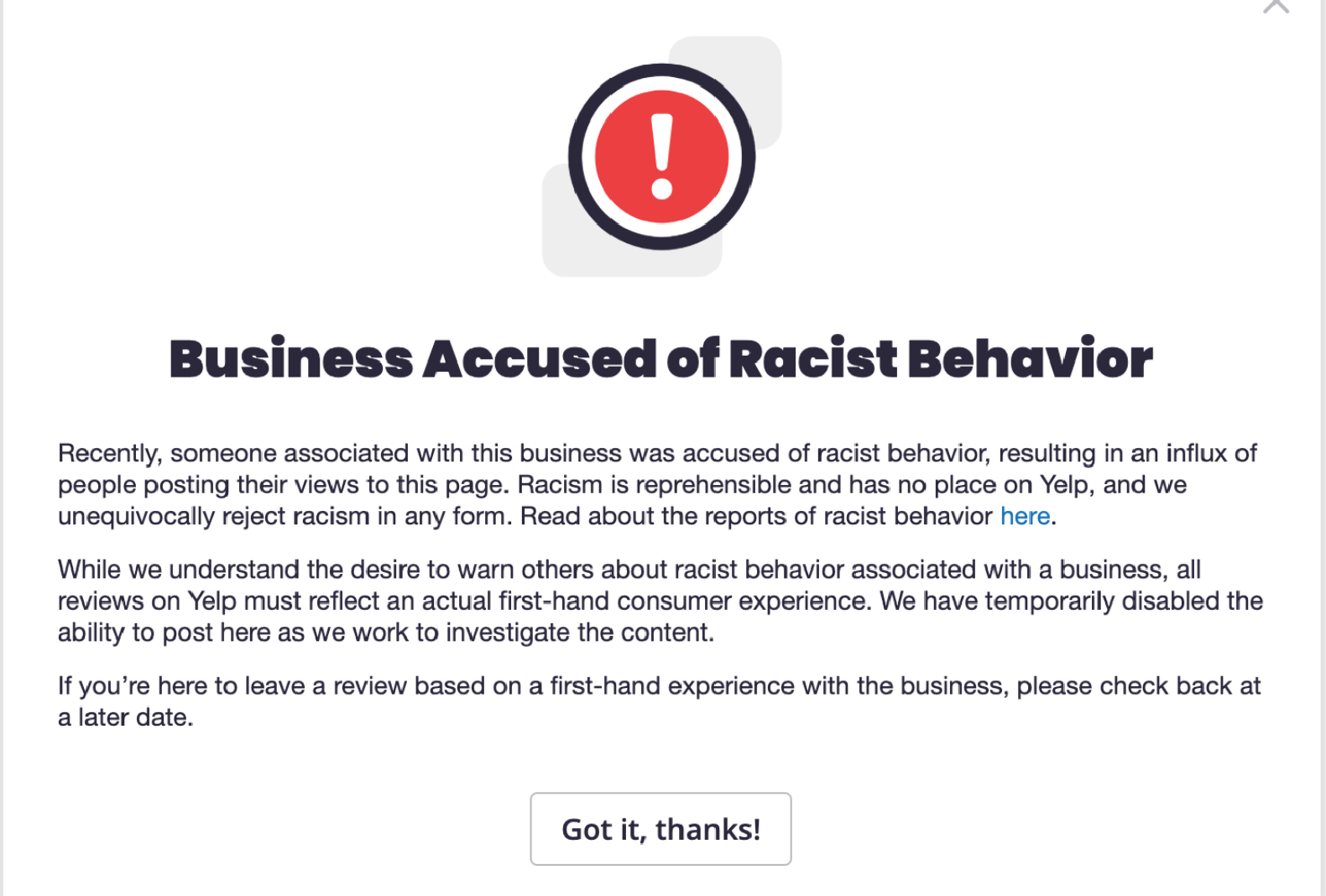 It’s not clear whether Yelp will investigate racist charges, or whether business owners will be able to respond. The review site would be temporarily disabled for users to add content, but business owners would still have access to their account.

The move is part of Yelp’s “zero-tolerance policy to racism,” the company said.

“We know these values are important to our users and now more than ever, consumers are increasingly conscious of the types of businesses they patronize and support,” the Yelp blog said.

Reviews mentioning Black-owned businesses were up more than 617% this summer compared to last year, the company said. Review mentions for women-owned businesses also climbed 114% during the same period.

As the social-justice movement has been reinvigorated in recent months, Yelp has rolled out several initiatives, including allowing users to search for self-described Black-owned operations.

Yelp said so far in 2020, the review site has seen a 133% increase in the number of “media-fueled incidences” compared with the same period last year. Between May 26 and Sept. 30, Yelp placed more than 450 alerts on business pages that were either accused of, or the target of, racist behavior related to the Black Lives Matter movement, the company said.

In addition, to help businesses create a more inclusive environment, Yelp said it is also offering a new toolkit of training materials associated with Open to All, a nondiscrimination campaign supported by more than 200 civil rights and racial justice groups. The toolkit includes a 60-minute “unlearning bias” training video and signage that communicates participation to guests.

CLARIFICATION: This article was updated with new information from Yelp about the process.

What’s in store for the economy? Vijay Vaitheeswaran of The Economist gives a preview of the economic trends he foresees
Oct 30, 2020