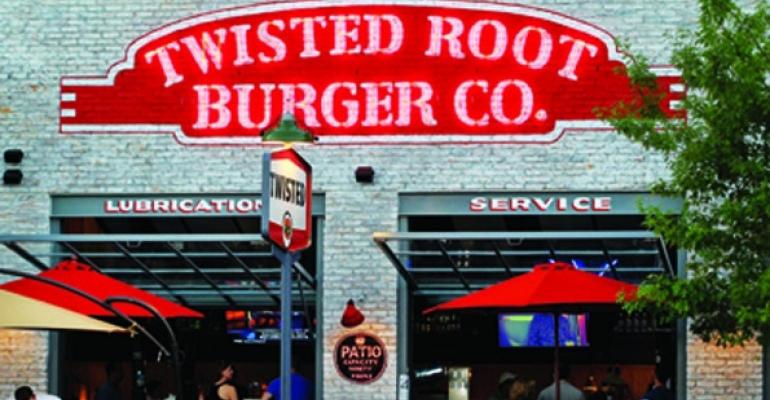 Twisted Root Burger Co. this month filed for Chapter 11 bankruptcy protection at three of its nine company-owned units, but several other restaurants in the 17-unit brand remained open for off-premise orders.

The Dallas-based Twisted Root temporarily closed all nine of its company-owned units in North Texas during the state and city restrictions during the coronavirus pandemic, and those remain shuttered.

Locations in Birmingham, Ala., San Angelo, Texas, and Shreveport, La., remained open for some off-premise orders, according the company’s website. The DFW International Airport restaurant also was open.

Texas units in Lubbock, Tyler and Waco were temporarily closed, and the Winter Park, Fla., restaurant was “closed for cleaning.”

The Winter Park location had just opened in November but closed June 24 after a worker tested positive for coronavirus. An employee answering the phone at the location Monday said the Winter Park restaurant planned to reopen by noon Tuesday.

“We have had one positive case in our store,” the Florida unit said in a Facebook post.  “All of our team members are being tested at this time and we’ve had Cintas come in and clean/sanitize our store. We take this extremely serious [sic] and will monitor everything daily. The positive person has not been in store since the weekend and is doing their full 14-day quarantine.”

Court documents cited assets of between $500,000 and $1 million at the locations, and liabilities of $500,000 to $1 million. The corporate headquarters had not returned emails by press time.

A spokesperson for the parent company, Brain Storm Shelter, said the sibling Truck Yard concept would not be part of any bankruptcy filings. "We reopened those locations, however on Friday the Texas governor shut down bars again, so they are all temporarily closed," she said.

Founder and co-owner Jason Boso told the Dallas Morning News he might file for Chapter 11 bankruptcy protection at the remaining six North Texas Twisted Root units should the company be unable to negotiate reduced rent from landlords and food costs from vendors.

Twisted Root, founded in 2006 in Dallas, was honored as a Nation’s Restaurant News Hot Concept in 2011, when it had seven units. It was also featured on the Food Network’s “Diners, Drive-Ins and Dives.”

The brand’s name comes from the restaurants’ fresh-cut French fries.

“When we started in Deep Ellum, we had a little hand-crank machine to create fries out of potatoes,” Boso explained in an interview for the Hot Concepts award. “A potato, of course, is a root vegetable, so we called it Twisted Root. … [Plus], we thought we were a little twisted.”

Update June 29, 2020: This story has been edited to include information on the Truck Yard concepts.