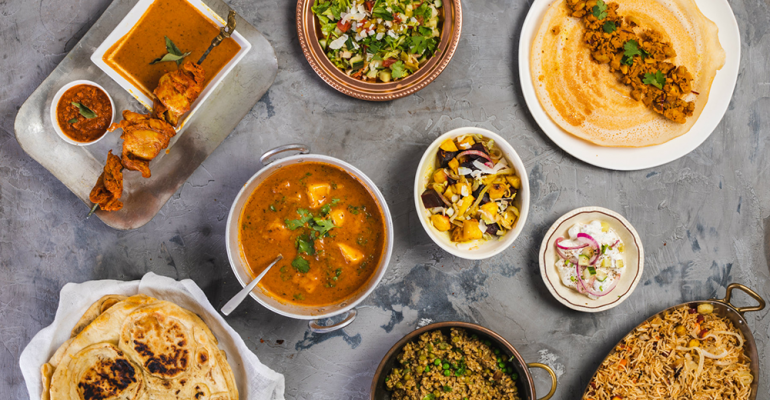 Dalup Modern Indian aims for a May opening.

Owned by entrepreneur Nat Loganathan and family, Dalup Modern India is positioned as a technology-forward concept with a menu that caters to dietary preferences and restrictions.

The team at Dalup has created custom-built equipment that can churn out freshly-baked naan bread and grilled-kebab-style meats all day long. Loganathan’s technology team also developed a robot that makes dosas (fermented Southern-Indian crepes) to order. To further accentuate the restaurant’s commitment to technology, Dalup will donate partial proceeds to the nonprofit organization Girls Who Code, which aims to encourage girls and young women to pursue technology careers.

On the food side, the menu at Dalup will feature a “light and fresh” take on traditional Indian cuisine, with highlights including a Dalup Naan Roll made with antibiotic-free, dairy-free chicken tikka masala with cilantro and greens wrapped in naan ($10.50); and a customizable “Veggie Karma” bowl made with freekeh, dairy-free Korma curry, roasted cauliflower, chickpeas, carrots and peas, tomato chutney, raita and pickled citrus ($11.95).

Through LJR Hospitality, Dalup’s owners have partnered with menu consultant and “Top Chef” alum Dave Martin who created a menu described as inspired by and as true as possible to the spirit of Indian cuisine, but with appeal to a wider, more modern potential customer base.

“I’ve been fortunate to have worked with restaurant partners with all kinds of ethnic concepts,” Reinstein said. “Each time, the founder sets the tone and level of cultural authenticity in each instance. Some have wanted to focus on truly authentic ethnic cuisine, while others want to adapt to a broader American palate to reach a wider audience as an entrée to the specific ethnic cuisine. My responsibility is to help each owner achieve their individual vision and execute accordingly.”

Martin said that, although he did not have any professional experience cooking Indian cuisine, he was excited to work with Loganathan to create as “true” a menu as possible, rather than striving for pure authenticity — something he said could only come from an Indian chef.

He said Reinstein’s firm asked Loganathan if an Indian chef was preferred, but the Dalup owners declined, arguing Martin would bring a more diverse style and unique interpretation of Indian cuisine to the table.

“Born and raised in Southern India, we wanted to create a fast-casual and modern Indian eatery that would resonate with both our Indian guests, as well as New Yorkers and our global audience who may not be as familiar with the cuisine,” Loganathan said. “With Chef Dave Martin’s credentials on Bravo’s “Top Chef” and beyond, we worked closely with him to fine tune each dish to stay true to the authentic flavors of the region, while offering a more modern and lighter twist to our favorite dishes from home.”

Martin started his menu consulting process by asking Loganathan for his specific vision, then by doing his own research on Southern Indian cuisine and creating a working menu. During the entire process, even as he modernized classic Indian recipes, he consulted with Loganathan on the ingredients he included in his curry and masala recipes.

Martin said he wanted to get the foundation and flavors right before introducing his own take. The result, he said, is a menu concept that will stand out from other similar fast-casual ventures because it is purely Indian cuisine — albeit a modernized interpretation — rather than an Indian fusion that blends other cuisines.

“[Nat] wanted to showcase that Indian food does not have to be heavy,” Martin said. “Butter chicken is delicious because it is fat-driven, but I said, ‘What if we keep it light?’ I think that’s one of the biggest draws to Dalup. In today’s market, being able to have a dairy-free or vegetarian curry and antibiotic-free proteins is exciting.”

California joins cities and states battling dining restrictions in court. But are the lawsuits having an impact?
Nov 25, 2020