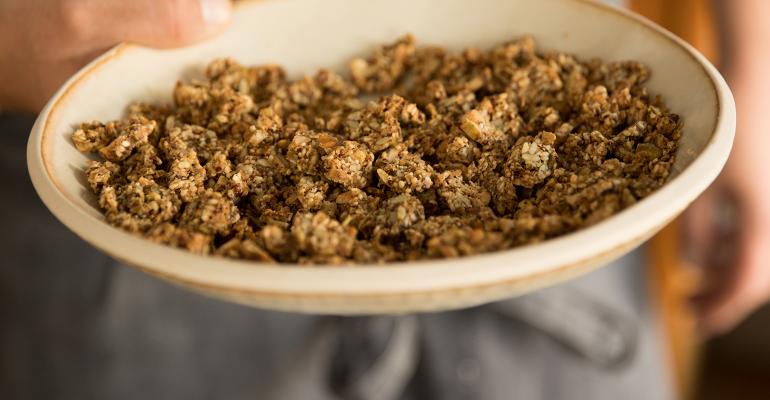 Tapping the genius of chefs

For years, after dinner service at State Bird Provisions in San Francisco, the staff would dry out leftover quinoa in the walk in. The next day, they’d deep fry it and add seasoning, seeds and nuts.

Sometimes they’d sprinkle it over a dish on the menu, but usually the addictive snack was devoured by anyone who could get their hands on it.

Everyone who tried it loved it, said Nicole Krasinski, a chef and one of the proprietors at the Michelin-starred restaurant.

“There’s always things that you make that people say, ‘Oh my God, you should sell this!’” said Krasinski, who co-owns the restaurant with her husband, chef Stuart Brioza. “But knowing what it takes to get it to [market], we definitely did not have the bandwidth to do that.” The team responsible for bringing the State Bird Seed quinoa snack to life, from left: Ali Bouzari of Render; Stuart Brioza and Nicole Krasinski of State Bird Provisions; and Dana Peck and Dan Felder of Render.

Enter Render, a new company designed to remove that barrier.

Render was founded in 2017 by a group of chefs, food scientists, and industry experts who say they have a new approach to the development of restaurant retail products. Based in Healdsburg, Calif., Render is an offshoot of Pilot R&D, a food innovation and development company, which the group founded in 2014.

Co-founder Ali Bouzari has a Ph.D. in food biochemistry, for example, and is the former culinary scientist for the Thomas Keller Restaurant Group.

Another co-founder, Kyle Connaughton opened Healdsburg-based SingleThread restaurant, inn and farm in 2016 and previously worked at the Fat Duck Experimental Kitchen, part of the U.K.’s three-Michelin-starred restaurant the Fat Duck. Co-founder and Pilot CEO Dana Peck brings with her years of legal expertise working with food, wine, and technology companies as a corporate associate, in addition to an early career staging at restaurants such as Union Square Café in New York.

Dan Felder, a co-founder and Pilot’s chief innovation officer, sees a sea change in the way package foods get to the retail market. There’s increasing space for small players and greater opportunity for restaurants to get a foothold, he argued.

“We look at the retail space as a way for restaurant chefs to test out another market segment,” said Felder, the former head of David Chang’s Momofuku Lab.

He believes Render can help chefs hurdle the typical barriers to entry, including economic and time constraints.

Render’s process and its products are different than a typical licensing deal with a celebrity chef or big-name restaurant, and that’s by design, said Felder.

While a typical licensing deal markets a product by leveraging the popularity of a chef or restaurant, when you work with Render, you don’t have to be a household name, said Felder.

And typically, licensing deals produce a product that’s already on the market — sauce or pasta, for example. But Render looks for innovative products that aren’t already on grocery store shelves, like an unusual quinoa snack.

The Render team handles the development, testing, sourcing, packaging, and distribution of the product. Chefs work with Render along the way and get a cut of the sales but do not have to put any money in.

Render declined to give specifics on the terms of their partnerships with restaurants and chefs. The final product is under the Render name with a description of the restaurant included in the packaging.

Working with chefs and restaurants is an “evolving” and “organic” process, said Felder.

“We listen to what they’re excited about, try the product or whatever the idea is in its current form, and look at it both from a marketplace standpoint as well as logistic and scaling standpoint and move from there,” he said.

State Bird Seed, Render’s version of the restaurant’s quinoa snack, is the company’s first product. It retails for $4.99 and is currently on sale in natural and specialty foods stores in San Francisco in three flavors: almond rosemary, sea salt, and furikake.

Render plans to release a line of beverages with another set of San Francisco-based chefs, Nick Balla and Cortney Burns of the restaurant Duna, in the spring. Currently the company is working with San Francisco Bay Area restaurants but soon will expand scope to include other regions.

Before Krasinski began working with Render, she was already friendly with the team. But she said it was their specialties and the unique perspective they provide that sold her on starting a professional relationship.

For restaurant like State Bird Provisions, a product on the market equates to “brand reinforcement,” said Krasinski.

“It’s the Instagram world we live in,” she said. “We’re all constantly looking for an opportunity to catch someone and remind them that you’re there.”

CORRECTION Feb. 1, 2018: The spellings of Ali Bouzari and Dan Felder have been corrected.