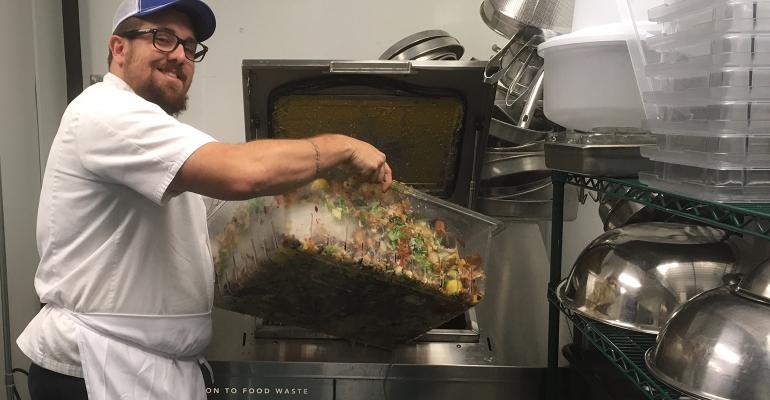 Taking out the trash

Restaurants get creative in their efforts to reduce food waste

With every discarded onion peel, veal bone or tray of lasagna, restaurants are contributing to global warming.

About 31 percent of the U.S. food supply is trashed every year, accounting for 133 billion pounds of food, based on 2010 data, according to the U.S. Department of Agriculture and the Environmental Protection Agency.

That’s food that could feed families. But it’s also garbage that ends up in landfills and generates methane. Landfills are the third largest source of methane in the U.S., and a significant contributor to the forces that cause global warming.

And in the world of food waste, restaurants are a big part of the problem.

Diners leave about 17 percent of meals uneaten on average, and 55 percent of potential leftovers are not taken home. A single restaurant can produce about 25,000 to 75,000 pounds of food waste a year, the USDA estimates, and food waste comprises about half of a restaurant’s waste stream.

The issue has also become a growing priority within the restaurant industry, with chef-restaurateurs like Dan Barber of Blue Hill in New York hosting pop-up events to showcase how unloved ingredients like ugly produce and byproducts like beef tallow can be diverted from the garbage in creative ways.

As part of its commitment to zero-waste initiatives, the restaurant invested in an Organic Refuse Conversion Alternative, or ORCA, machine, which uses aerobic digestion to turn food waste into environmentally safe water that can flow straight into the city sewage system.

The makers of the ORCA contend that one machine can divert up to 875,000 pounds of food waste from ending up in landfills. That means less methane gas produced at landfills and less diesel fuel use and resulting emissions from garbage trucks.

Matt Farley, the restaurant group’s corporate executive chef, said the ORCA is roughly the size of an ice machine and sits in Fin & Pearl’s kitchen. Kitchen staff can just toss food waste —everything from produce bits to a whole fish carcass —  through the door. It digests about 600 pounds of food waste per day, or about 25 pounds per hour.

There are no odors, little maintenance is required and the plumbing goes directly into the sewer line.

There is some education needed for kitchen staff: The ORCA won’t take particularly fatty ingredients, fibrous items like corn husks or bits that won’t break down, like oyster shells.

But what doesn’t go into the ORCA, the restaurant sends to a composter, Farley said.

“When bussers bring uneaten food from guests, they used to scrape it all into a can and put the dishes into the dishwasher. Now we have a sorter” who separates waste designated for the ORCA or for composting, he said.

The ORCA is a serious investment, and costs more than $30,000, Farley said. While the restaurant saves some money on its reduced trash load, there’s no real monetary return.

“But if we’re going to talk the talk, we need to walk the walk,” Farley said. “If I were opening a little mom-and-pop, I don’t know that I could throw down $30,000 for a machine like that, but I’m so happy to have the resources to do it now.” The Milwaukee wine bar Balzac is sending less food to the trash by reusing it.

In February, Balzac launched a new initiative on Sunday nights, offering guests free “family meals” from 10 p.m. to close with the purchase of a drink.

On the menu: dishes created from kitchen scraps and leftovers from the past week.

The family meal option on a recent Sunday included blackened tuna, featuring parts of the fish not used in the popular tuna tartare on the regular menu. Oysters once available on the half shell were fried. Vegetable scraps ended up in soups and stews, and apple cores were turned into preserves or chutney.

“We don’t want to give the idea that this is all food that’s about to go bad. It’s not garbage,” said Emily Chirillo, Balzac’s general manager. “It’s redefining what we think is garbage.”

The family meal is served late on a Sunday night in part to reach foodservice industry members who would likely be patrons coming in for a bite after their workweek ends. It’s part industry night and part spreading the gospel.

“We want to bring awareness to the greater issue,” Chirillo said.

Chef Tracy Chang opened her first restaurant, Pagu, in Cambridge, Mass., earlier this year, with a menu influenced by Spain and Japan, and a commitment to transparency.

Chang believes in making use of every ingredient in innovative ways. One of her favorite tools is the dehydrator.

For instance, roasted green tea hojicha is used to make a syrup for a Black Sesame Tofu dessert. The strained tea leaves are then dehydrated and ground, creating a sort of tea sugar that can be used on macarons, or to rim cocktail glasses.

“It adds flavor,” Chang said. “It becomes like a spice or seasoning.”

Similarly, Chang buys a whole kampachi, from which some parts become sashimi, and another is roasted, while the bones are used to make broth. As for the byproducts of the fish, she dehydrates them and adds them to the broth to deepen the flavor, or uses them in dishes like congee, coming soon to the menu, she said.

What can’t be used is composted.

“A lot of people might see composting and recycling as an added expense,” Chang said. “But we’re taking from the earth, and we have to give back to it.

“If that means spending more money so the compost can be properly handled and is properly separated from trash and recycling. And if that means educating people about the differences between all three of those and not contributing to landfills, then, yeah, we’re going to spend that time and spend that money.”

About half of a restaurant’s trash stream is made up of food waste.

Reducing that output can save on trash removal costs and the expense of plastic bags. It’s also rapidly becoming a political issue.

Across the country, cities, counties and states have enacted laws mandating composting or recycling, or creating tax incentives for food donations.

The National Restaurant Association has partnered with the Grocery Manufacturers Association and the Food Marketing Institute to create the Food Waste Reduction Alliance, an organization devoted to promoting best practices to help restaurants shrink their environmental footprint when it comes to waste. Here are some basic steps for keeping food out of landfills from the Alliance and the NRA’s Conserve Program:

1. Conduct a waste assessment. This could be as simple as a dumpster dive to get a better sense of the materials that make up your waste. Recruit a small team, lay out some tarp, dress for a mess and start sorting. Or ask your waste hauler, recycling vendor or a consultant to do a waste audit.

2. Track your waste expenditures. Do this over time to get a better sense of the costs and how they might be impacted by changes in procedure.

3. Reduce the source of waste. The first step in waste reduction is buying the correct amount of food in the first place. Track your inventory to better monitor what ends up being thrown away.

4. Feed the hungry. Unserved prepared food can be donated to hunger relief agencies. Restaurants can get a tax deduction and the federal Good Samaritan law protects them from liability.

Organizations like Food Donation Connection and Meal Connect help restaurants find non-profit agencies. Develop a relationship with an agency in your area to ease the process, give them only what they can use and establish procedures for transportation.

5. Feed animals your leftovers. Regulations vary, but some states allow farmers to accept leftover raw foods for animal feed. Contact your local agricultural extension office, state veterinarian or health department to learn local rules and regulations, and to reach out to local farmers.

6. Find industrial uses. There is a robust market for converting fats, oils and greases to biofuel, which, if not properly disposed of, can clog sewer pipes and drains.

7. Compost. Non-edible food scraps, plate scrapings, fruit and vegetable peels, and even spoiled food can be collected and converted into compost that can be used to fertilize crops, lawns and gardens.