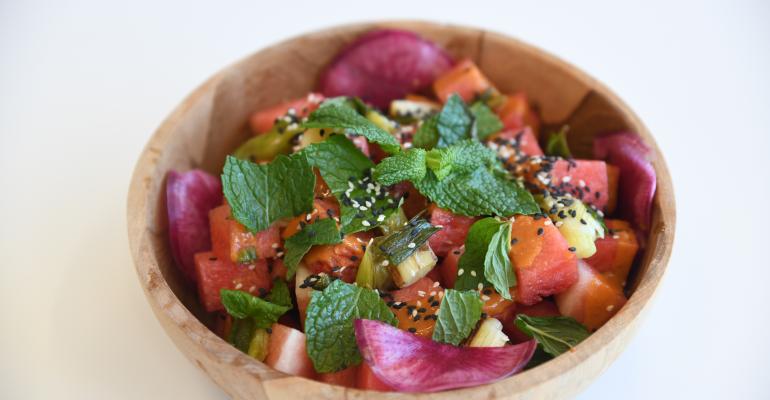 Personal health and wellness studies inform every aspect of this business

In Kansas City, Missouri, Billie’s Grocery opened on June 1, 2020. Operating inside a 1920s building that once housed local cosmetics and perfume company, Luzier’s, Inc., the restaurant, bakery, and retail space finally opened after several delays, including the start of the pandemic and the lengthy process of the building reaching the National Historic Register, in 2018.

“I wanted the people, bakery cases, and food to be the pop of color,” Krause said. “We work on eating the rainbow, so I wanted everything to be beautiful.” The space accommodates approximately 70 in-house diners, who give rave reviews to the wide array of gluten-free options and fresh flavors.

Eating the rainbow is very much at the heart of Krause’s vision for food offered at Billie’s Grocery. But it wasn’t always a big part of her restaurant model. Krause previously founded and ran Soho Bakery and four Filling Station Coffee locations.

As she worked to the point of exhaustion and her father, Bill (namesake for Billie’s Grocery), died following a heart attack, Krause put on the brakes and sold her existing businesses. Then she learned about mind/body connections while studying yoga, herbalism, nutrition, and more, and healing from her own health challenges. Krause became a nutritional therapist, health coach, and owner of the new Unbakery & Juicery.

At Billie’s Grocery menu items often incorporate plenty of organic, nutrient dense ingredients. “But we cater to all dietary and lifestyle needs for foodies,” she said. “We are very much a lunch-hopping place, especially from 11-3.”

Today, 80-90 percent of customers are restaurant patrons. Average meal tickets run around $15, including a drink, unless customers leave with a box full of baked goods-which most people do.

Vegan and gluten-free, multi-layer Caramel Date Bars meet gargantuan cookies, small cakes, and pastries in a massive bakery case beside the counter where customers place their orders. “The bakery area took off quickly and we went to fast casual [service] because of staffing issues-with no servers but runners,” Krause said. “You can still attend to people and get to everybody.”

Krause creates most recipes, often taking inspiration from dishes she has sampled while traveling nationally to internationally. “Everything is scratch-made, in-house,” she said. “The menu has grown, and the sesame ginger watermelon salad is a favorite that has come back.”

Sesame chicken salad with gluten-free fried chicken, or a gluten- and dairy-free Thai bowl with rice noodles and no sugar in the sauce are other customer favorites. Breakfast bowls include the Post Workout Protein Bowl and Brekki-a tasty combo of eggs, roasted potato, herb butter, sourdough, bacon, and green onion. Cocktails, wines, and mocktails are available at the cocktail bar and some new wraps will soon arrive on the menu.

“Right now, sourcing local [ingredients] has been a lot easier – meats, produce, tortillas – but then we get a few things from out of state that make us unique, such as ingredients for our raw desserts, or olive oil and balsamic vinegars from Italy,” Krause said. “Culinary pleasers.”

Across the hall, Billie’s Grocery also hosts hands-on cooking classes, such as an Immune-Boosting and Anti-Inflammatory Class or Vegan Chicken + Waffles. Classes recently relaunched, as pandemic issues have eased.

Although Apothé did not turn out to be a sustainable business, Krause held on to the space, two doors south of the restaurant. Now, “We’re about to move the bakery into the old Apothé,” she said. “There might be a new online store, too.”

In the meantime, Billie’s Grocery continues to thrive. “I think it’s a new culinary experience for everyone,” Krause said. “It’s a healthy alternative with healthy treats. We feed the entire family – there’s something here for everyone, from all walks of life.”