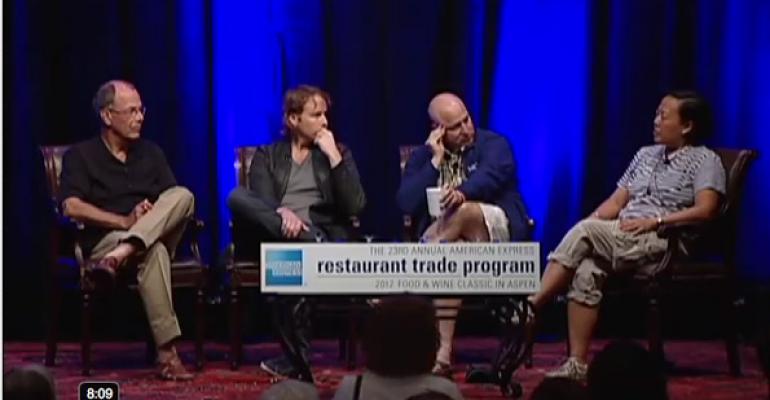 Restaurateurs on small changes that paid off

Four veteran restaurateurs — Grant Achatz of Alinea, Aviary and Next in Chicago; John Bettin of The Palm steakhouse chain; New York-based Tom Colicchio of the Craft, ’Wichcraft and Craftsteak chains; and Anita Lo of Annisa in New York — shared their insights with attendees of the American Express trade program in a panel titled “Restaurant Reset: Small Changes, Big Payoff.”

Bettin said that after the 2008 economic crash, The Palm’s management wanted to renovate the restaurants to appeal to a younger demographic, who were spending more time and money with The Palm’s competitors. But rather than invest hundreds of thousands of dollars in each restaurant, they focused on “the six-foot world of the guests,” rejuvenating what was in their immediate space. They also introduced smaller starter salads, single-portion options for their family-style side dishes, and a bar bites menu. After the renovations were complete in 2010, The Palm achieved parity with its competitors in serving the 18-to-35-year-olds.

At Colicchio’s restaurants, management teams meet once a week. “You don’t come [to the meeting] with a problem; you come with a solution,” he said.

He also said restaurateurs need to create an environment where servers and cooks can deliver bad news to chefs — such as that a dish was overcooked — without getting yelled at.

He advised inviting power companies in to restaurants to find energy inefficiencies. “They do it for free,” he said.

He also discussed how he reinforced with customers at ’Wichcraft, his sandwich chain, its use of sustainable ingredients. Instead of giving customers numbers when they order, they are given pictures of a pig, carrot or other ingredient with the story of where it came from.

Lo said determining what to rework in a restaurant can’t be done purely by the numbers. “If you’re doing it just for business it’s not going to work. The client’s not going to get it,” she said.

Bettin agreed that sometimes you have to operate from your gut and not use too many statistics, adding that restaurants get immediate feedback once making a change, and know quickly whether it’s working or not.

He also advised restaurateurs to empower their servers to solve problems. “The last thing we want to hear them say is ‘Let me check with the manager,’” he said.

Achatz discussed how he resolved the problem of not turning tables at Alinea fast enough for later diners to be seated on time.

He found that eliminating a single one-bite course could save 15 minutes when accounting for marking the table, pouring the wine and clearing. He also said that by changing plate shapes — such as from round to rectangular — servers were able to place more plates on their trays and deliver food more quickly.