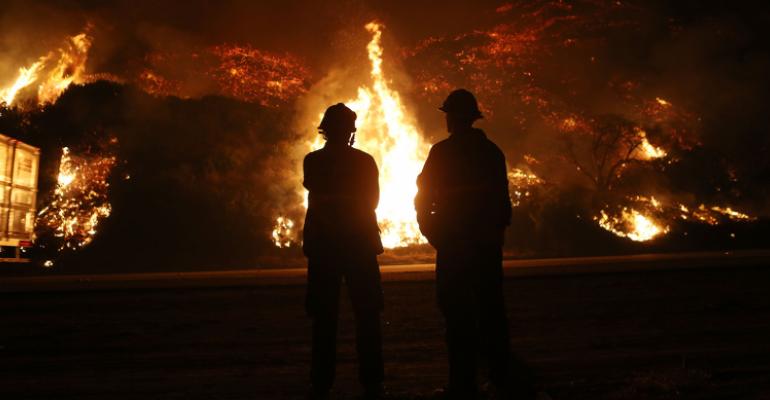 Mario Tama/staff/Getty Images News
Firefighters monitor a section of the Thomas Fire along the 101 freeway north of Ventura, Calif.
Operations

Some restaurants close as operators monitor the situation

By the end of the day Wednesday, fires had burned more than 95,000 acres, mostly in Ventura County, north of Los Angeles. Firefighters were struggling to keep flames away from the bucolic Ojai Valley, according to state fire officials. At least 150 structures were destroyed in that area. No civilian injuries were reported. A firefighter works in the aftermath of a fire in a residential neighborhood of Ventura. (Photo by Mario Tama/Getty Images)

Restaurant operators throughout the city said they were monitoring the situation, and some reported closures.

The Bel-Air, a casual-dining restaurant tucked into the Sepulveda Pass, closed early Wednesday just before a mandatory evacuation order was issued.

Owner Susan Lord said she didn’t know whether the restaurant would reopen Thursday.

“As a neighborhood restaurant, we are worried sick for our customers and neighbors and friends,” she said in an email. “We know of two customers, one who is at the restaurant almost every day, whose houses burned down today. It’s heartbreaking.”

Lord said the restaurant wasn’t in immediate danger, but she worried that the winds would pick up overnight.

“We are adjacent to a gas station, which many people don’t like, however, in this case, we know the fire department will not let a gas station go up in flames if they can stop it, so that makes me feel a little better,” she said.

A spokesman for the Carl’s Jr. chain said eight restaurants were dealing with power failure due to downed lines, and three had closed temporarily.

“Employee and customer safety is our first priority, and we are determining the need to close or evacuate stores based on evacuation maps and recommendations from emergency responders,” the company said in a statement. “We will continue to work with our franchise and company locations to ensure our employees and customers are safe.”

Erik Oberholtzer, co-founder of the Los Angeles-based chain Tender Greens, said no restaurants were impacted on Wednesday, but that he was concerned for the chain’s partner farms in Ventura County, where the burn zone remained out of control Wednesday. Damage to the area was as yet unknown.

Chef and restaurateur José Andrés, whose World Central Kitchen organized chef volunteers and donations to serve more than 3 million meals to victims of Hurricane Maria in Puerto Rico, in a tweet indicated that his crew was on the way to Los Angeles to work with the Red Cross to feed those displaced by fire.

Atlanta chef and restaurateur Hugh Acheson was forced to cancel a scheduled visit to a Whole Foods Market in Glendale, Calif., where he was planning to demonstrate recipes from his book “The Chef & The Slow Cooker.” Acheson’s restaurants in Georgia include 5&10, The National, Empire State South, First & Third Hot Dog & Sausage Shack and Spiller Park Coffee.

A spokesperson for Acheson said he was in talks to host a fundraising event to benefit fire victims at Jonata Winery in Buellton, Calif.

For many in the industry, it was a déjà vu experience after Northern California was hit by wind-whipped fires throughout the Wine Country. A section of the burns on a bluff in La Conchita, Calif. (Photo by Mario Tama/Getty Images)

The winds picked up in Los Angeles, reportedly creating fears that flames would be pushed into more urban areas.

Operators said they remained on guard.

“As of now, locations are still open and unaffected, but the situation is very dynamic and changing hourly,” said Matt Hood, chief marketing officer of The Habit Restaurants LLC.