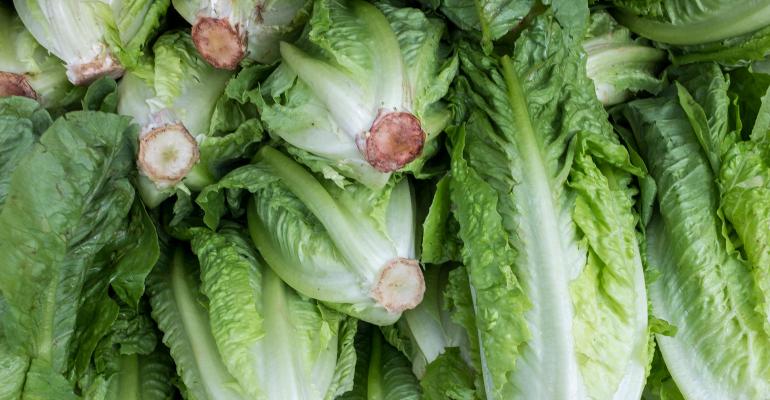 A nationwide advisory to stop consuming romaine lettuce is still in effect this week, but only for supplies coming from California, according to a statement released late Monday from federal food safety officials.

The E. coli outbreak, which has sickened 43 people in 12 states, has sent restaurants scrambling to find alternate leafy greens for menu items that call for romaine.

The outbreak, announced jointly Nov. 20 by the Centers for Disease Control and Prevention and the Food and Drug Administration, forced grocers and restaurants to pull romaine lettuce from produce aisles and menus over the long holiday break. In a tweet posted the day after Thanksgiving, FDA Commissioner Scott Gottlieb said the “romaine implicated in the current outbreak is likely from California.”

UPDATE ON OUTBREAK: The romaine implicated in the current outbreak is likely from California based on growing and harvesting patterns. The goal now is to withdraw the product that’s at risk of being contaminated from the market, and then re-stock the market.....

Seattle-based food safety lawyer Bill Marler said identifying California farms as the source is not a ground-breaking revelation. California and Arizona dominate U.S. lettuce production year-round, with California being the primary source of romaine in October, he said.

The victims in the known cases reported getting sick in October, according to the CDC.

The CDC’s blanket nationwide advisory to remove romaine from circulation “is essentially a recall of all product grown in California,” said Marler, whose firm specializes in foodborne illness cases.

This is the second major incident tied to contaminated romaine in 2018, and the third in the last 12 months.

The nationwide advisory from last week warned restaurants and consumers to throw out all romaine including whole heads of romaine, hearts of romaine, bags and boxes of pre-cut lettuce and salad mixes that contain romaine, baby romaine, spring mix, and Caesar salad. Late Monday, the FDA adjusted the advisory to only include romaine sold in California -- specifically romaine lettuce grown in central and northern California.

"Romaine lettuce that was harvested outside of the Central Coast growing regions of northern and central California does not appear to be related to the current outbreak," the FDA stated.

Marler said his firm has been contacted by several victims from Canada and New York. All of them ate romaine served in meals at restaurants. He declined to name the restaurants because the firm is still investigating the events leading up to their illnesses.

In a series of Nov. 23 tweets, FDA commissioner Gottlieb said the agency is working with the produce industry to restock the market with new “romaine from different growing regions, including Florida and Arizona.”

He added that the FDA is working with growers and distributors on a system for marking produce with “post purge” labels that show the location and harvest date.

“We want to help unaffected growers get back into production and enable stores and consumers to re-stock,” he said in a tweet. “One goal we’re seeking is to make this type of labeling the new standard rather than a short-term fix; as a way to improve identification and traceability in the system.”

On Monday, the FDA confirmed the new labeling instructions. "Based on discussions with major producers and distributors, romaine lettuce entering the market will now be labeled with a harvest location and a harvest date," the agency said. "Romaine lettuce entering the market can also be labeled as being hydroponically or greenhouse grown. If it does not have this information, you should not eat or use it." 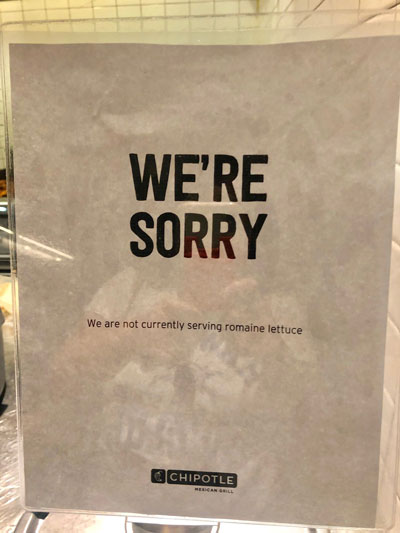 Until then, restaurant chains, especially brands where romaine is a core ingredient on salads and sandwiches, grappled with how to adapt their menus during the advisory.

Culver City, Calif.-based Sweetgreen said it has pulled “all romaine and spring mx containing baby romaine” from its nearly 90 stores.

“We are committed to serving safe, fresh, delicious food every day,” the company said in a statement. “We are focused on moving quickly and communicating when there is any risk to ensure we are keeping our guests safe."

Panera Bread and Habit Burger Grill are reworking menu items that call for romaine. The Habit Burger said it is using iceberg and red and green leaf lettuces as substitute leafy greens on some menu items including salads. However, the Caesar salad is off the menu for the time being, the Irvine, Calif.-based company said.

Panera Bread is informing customers about the romaine alert on its app. A message in the app reads: “We’re always committed to your safety and serving you the best product possible, so we have substituted other fresh greens for romaine lettuce.”

Ingardia Bros., a Santa Ana, Calif.-based produce distributor, said many of its restaurant clients have been asking for alternative leafy greens such as iceberg, Boston, green leaf, red leaf, spinach, escarole and arugula.

“Because of the sudden and very high demand for these items, prices are jumping quickly,” Dave Samuels, a company representative, said Monday.

The Habit Burger, for example, said it is “challenged” by the demand for substitute leafy greens.

“Since the CDC's advisory, supplies of all types of lettuce have become challenged and The Habit is managing the menu adjustments on a day-to-day basis and will continue to do so throughout the week,” the company told NRN.

Romaine alerts on the rise

This is the third E. coli outbreak tied to leafy greens and romaine over the past 12 months. The FDA said the E. coli strain in the current outbreak is similar to the one associated with the fall 2017 outbreak blamed on leafy greens in the U.S. and romaine in Canada.

The current strain is not related to the E. coli “outbreak linked to romaine that occurred in the spring of 2018,” the CDC said. That multistate outbreak, announced in April, was tied to romaine grown in Yuma County in Arizona. After a months-long probe, the FDA said the romaine was likely tainted by contaminated irrigation water found near the Yuma growing area.

In the spring 2018 outbreak, 210 people in 36 states reported getting sick. Five deaths were reported, and 96 people were hospitalized. Marler said his firm is representing more than 100 victims in that outbreak, including 25 who ate at Panera Bread.

He said Panera got its lettuce from a supplier, who in turn, sourced its romaine from “multiple” sources — a common practice that makes traceability difficult.

Until the FDA and produce suppliers can find an accurate and fast system for traceability during an outbreak, “overly broad” alerts like the romaine warning are likely to be commonplace, Marler said.

In other food safety news, the FDA said Long Phung Food Products, a Houston-based company, has voluntarily recalled ready-to-eat pork products that may be adulterated with Listeria. The ready-to-eat pork patty rolls were produced from May 21 to Nov. 16 of this year and were distributed to various retailers and distributors nationwide, the FDA said last week. Food safety regulators believe the products are tied to a cluster of listeriosis illnesses reported in recent weeks.

This story has been updated with new information from the FDA on the scope of the outbreak and changes to product labeling.
TAGS: Food & Drink Back of the House
0 comments
Hide comments
Recommended Reading