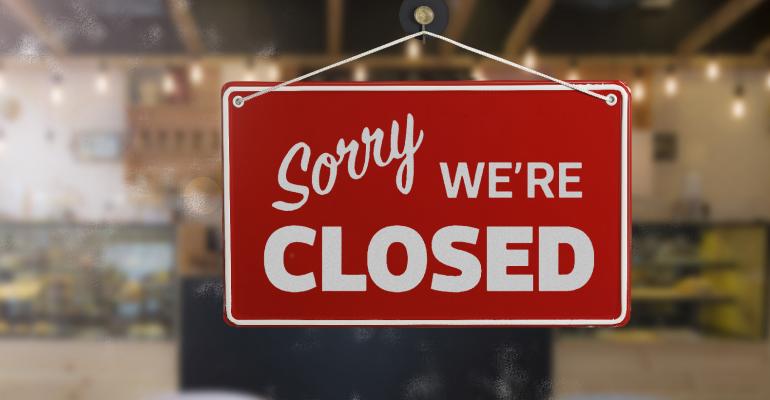 ersinkisacik / iStock / Getty Images Plus
The Independent Restaurant Coalition noted that the “fear of contagion combined with stay-at-home orders, bans on large gatherings and pleas by public health officials and state leaders for social distancing shut down independent restaurants’ primary form of business (dine-in) within a few short days in March.”
Operations

Forecasters seem to agree the storm is intensifying

The fallout of the coronavirus pandemic on the restaurant industry is far from over. Estimates of the eventual carnage range widely.

Predictions of closures are like forecasts of hurricanes: Experts know they will be coming because the conditions are right, but the timing and intensity depend on a complicated stew of factors.

None of the predictions are pretty. They range from alarming to disturbing — from 10% of the nation’s estimated 650,000 restaurants to 85% of the independently owned units.

Related: 80% of restaurant owners are not certain that they can survive the COVID-19 crisis, according to new data from the James Beard Foundation and Independent Restaurant Coalition

“Without financial aid, we are looking at an extinction event for restaurants as we know them,” tweeted chef and television star Andrew Zimmern, a leader in the IRC.

Without financial aid, we are looking at an extinction event for restaurants as we know them.
Been saying it for 10 weeks. This is real.
And here is more proof. @indprestaurants https://t.co/FRRLYrHWCe

In a white paper, the coalition said, “Independent restaurants are confronting an existential crisis. The novel coronavirus has turned the industry on its head.”

A trickle of independent restaurants have already announced they are closed for good, ranging from Momofuko Group’s shuttering of Nishi in New York City and CCDC in Washington, D.C., to Lettuce Entertain You Enterprises’ closure of Nacional 27 in Chicago.

And big brands have said they are examining their portfolios and trimming out units. For example, Seattle-based Starbucks Corp. announced in June that it will be permanently closing 400 units over the next 18 months to focus especially on “grab and go” outlets.

The Independent Restaurant Coalition noted that the “fear of contagion combined with stay-at-home orders, bans on large gatherings and pleas by public health officials and state leaders for social distancing shut down independent restaurants’ primary form of business (dine-in) within a few short days in March.”

Already, according to surveys by the National Restaurant Association, about 3% of restaurants have closed permanently. “But the full scope of closures won’t be known until government statistics are released several months from now,” the association said in a June update. “The association projects the final number will be in the tens of thousands.”

In mid-July, the ratings site Yelp estimated 60% of 26,160 restaurants it tracks had closed permanently. The monthly Yelp update said, “The restaurant industry now reflects the highest total business closures, recently surpassing retail. As of July 10, there have been 26,160 total restaurant closures, an increase of 2,179 since June 15.”

The CEO of reservations service OpenTable, owned by Booking Holdings Inc., in May said one in four U.S. restaurants will go out of business, a category of retail that suffers especially deeply because of shut-down orders.

“Restaurants are complicated beasts,” Steve Hafner, CEO of Booking Holdings’ OpenTable and Kayak, told Bloomberg in May. “You have to order food and supplies. You have to make sure you’ve prepped the kitchen and service areas to be easily disinfected.”

Investment research firms have produced various estimates of the expected restaurant closures. UBS predicted at the start of the pandemic in March that it could be one in every five restaurants. A Barclay’s Capital analyst pegged it at 10%, which matched an estimate produced by Stephens Inc.

The precise number of restaurant closures will not be known for months if not years.

"The exact number will almost certainly be somewhere in the middle," said Mark Siebert, CEO of the Homewood, Ill.-based franchise consulting firm iFranchise Group, in a statement. “We will likely see over 100,000 empty shells where restaurants once stood."

Restaurants that are ready to expand, Siebert noted, “will likely find numerous qualified buyers who are eager to take advantage of the opportunity to open in prime locations for less."

The opportunities exist for development and franchises, he said. "Once an effective vaccine is found, we anticipate that demand for dining out will quickly return to pre-COVID levels, providing those restaurants that survive a unique opportunity for growth," he said.

“This tragedy will create a tremendous franchise sales opportunity for restaurants who have weathered this storm by early 2021,” Siebert said.