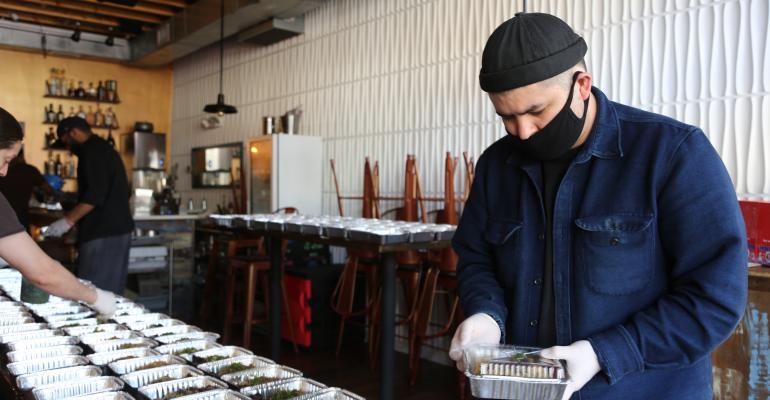 Power of 10
Erik Bruner-Yang packing up meals in Cane, a restaurant in Washington, DC.
Operations

Relief organization The Power of 10 is helping restaurants stay afloat by donating $10,000 a week for them to make food for charities

At the peak of the coronavirus pandemic in late March and April when restaurants continued to close their doors (some permanently) around the country, it was clear that for most restaurants, the typical operations model would not work.

When chef Erik Bruner-Yang — owner of four Washington, D.C. restaurants, Maketto, Brothers and Sisters, Spoken English and ABC Pony — had to close two of his own restaurants in March, he came up with an idea to use a donation-based model to help keep participating restaurants afloat with temporary, weekly financial aid. In exchange for restaurants being able to keep their doors open for regular customers, staff would also provide meals for local community organizations that support the vulnerable and frontline workers, like hospitals and shelters.

But how much does a restaurant need to survive for a week at a time? Bruner-Yang calculated that in Washington, D.C. where the minimum wage is $14.50, you can pay 10 full-time employees $5,800 per week, which would leave $4,200 left over for food costs (which would in turn, pay for a $20 appetizer or entrée). In total, he calculated that a restaurant in Washington, D.C. would be able to survive on $10,000 per week to pay 10 full-time employees to make 1,000 meals for both regular customers and to be distributed to local community organizations: hence the name “The Power of 10.”

Each participating restaurant will, in total, receive $40,000 to participate in this relief fund effort with the dual purpose of helping out businesses in need and donating to local charities.

“A lot of the restaurants that were closed and are now participating were able to rehire employees, some restaurants were struggling but still open and are now able to sustain their jobs — each restaurant has their own story,” Bruner-Yang said. “We help provide cash flow to vendors and keep the supply chain going.”

At the time that they launched on March 26, The Power of 10 only had four participating restaurants (including two of Bruner-Yang’s own restaurants), and they relied largely on individual contributions from outside donors. But a couple of weeks ago through a professional connection, Bruner-Yang was able to get in touch with Capital One bank to discuss a partnership opportunity. The Power of 10 has since announced its expansion efforts thanks to financial and marketing support from Capital One. Instead of just focusing on Washington, D.C., they have expanded nationally and have 30 restaurants on their roster including restaurants in Los Angeles, New York City, Chicago, Dallas, Baltimore, Charlotte, and Richmond. Participants include JJ Johnson’s Field Trip in New York, NY; Diana Devila’s Mi Tocaya Antojeria in Chicago, Ill; Micha Magid’s Mighty Quinn’s in New York, NY, and Spike Mendelsohn’s Santa Rosa Taqueria and We The Pizza in Washington, DC. In total, The Power of 10 has raised more than $750,000 for their partner restaurants.

For one participant, Bricia Lopez, who owns the family-run Oaxacan restaurant, Guelaguetza, in Los Angeles, getting involved with the Power of 10 has allowed her to supplement her dwindling income. When the pandemic first hit, Guelaguetza closed for a week and most of their 100+ employees were laid off. When they opened, they were able to pivot from a sit-down, occasion eatery to a takeout-only spot on the weekends, and they also began offering some groceries.

Their partnership with Power of 10 began the week of May 4, and they are partnering with the Children’s Hospital of Los Angeles to provide lunches for thousands of shift workers in the hospital.

“Now [with this partnership], we’ll be able to open for longer periods of time,” Lopez said. “From the beginning as a business owner you feel responsible for people who count on you, each person had a family so there are hundreds of people that were affected. […] being able to open our doors again is so helpful. Right now, we have 16 people back and we’re hoping to get back more.”

But similar to Jose Andres’ efforts with World Central Kitchen that tasks restaurants with making meals for nonprofit organizations and hospitals, the Power of 10’s relief plan is only a temporary solution and will help restaurants stay in business for only four weeks. Once those four weeks are up, Bruner-Yang said that he wants to the Power of 10 to continue on in some capacity, though he did not specify a forward-thinking plan:

“We’ll go for as long as possible; with our partnership with Capital One, we are not just reactive to the moment,” he said. “I think independent restaurant owners need to create their own safety nets moving forward, since it’s possible we’ll get a second wave of this happening again. It’s important for restaurants to be prepared for the inevitable. But the work of Power of 10 will continue on, if possible.”