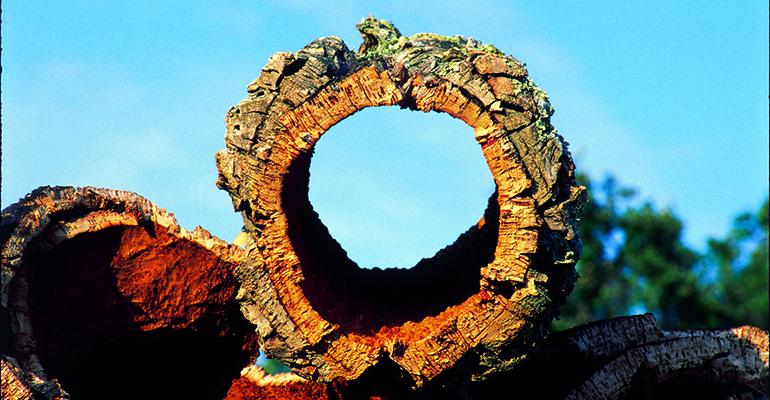 Putting a cork in it

At Second Street Bistro in Williamsburg, Va., there’s a box by the entryway. Staffers sometimes have to remind guests that it’s not a trash bin.

For about six months, the wine-focused bistro has collected hundreds of corks pulled from wine and other bottles, said hostess Victoria Brown. Guests are also invited to bring in their corks for the collection. The used corks are donated for recycling to ReCork, a Vancouver, British Columbia-based program launched by Canadian footwear brand Sole.

ReCork collects the natural cork used in wine bottles, grinds it into cork granulate and repurposes it make other products, like yoga blocks and shoe soles.

The goal is to promote the use of natural cork, which comes from the bark of cork oak trees found in Portugal, Spain, Algeria, Morocco, Italy, Tunisia and France. Like all plants, the trees are natural “carbon sinks,” which absorb carbon from the atmosphere, but these trees are particularly good at it, according to ReCork.

Harvesting the bark to make cork, which is done by hand every nine years, causes no harm to the tree, ReCork contends. In fact, it can extend the tree’s lifespan as it regenerates bark, thus absorbing more carbon. 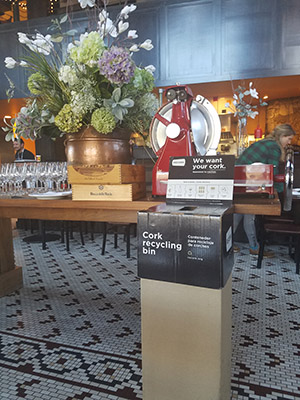 Creating a market for that natural cork creates an economic incentive to reinvest in cork forests. So ReCork also encourages restaurant operators to purchase wines that use recyclable natural cork stoppers, rather than synthetic stoppers that can end up in landfills.

“Any sustainable business that serves wine should look at what the bottle enclosure is,” said Janet Naylor, ReCork’s cork support manager.

Interest in recycling cork is increasing, she said, with notable companies like Aria Las Vegas and the Bellagio restaurants recently launching recycling efforts.

Naylor said it’s impossible to say how many restaurants participate, since corks are also recycled by retail and liquor stores. There are two categories, public and private collection partners.

The restaurant Second Street, for example, is a Public Collection Partner, one that invites outsiders to contribute corks. ReCork supplies the collection bin and marketing materials, and shipping is free over 15 pounds.

Private Collection Partners are restaurants that just want to recycle corks from their back end of operations, and not the general public. 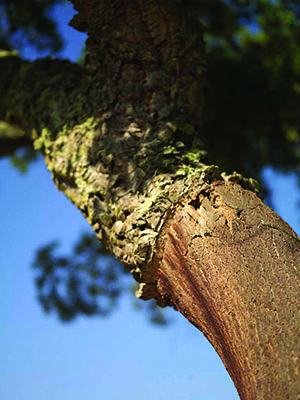 Zino Ristorante in Edwards, Colo., is one such restaurant.

“Other restaurants in town started doing it and I liked the idea. I noticed how many corks I was collecting so I decided to get my own container,” said owner Giuseppe Bosco, who’s been recycling corks for about two years.

Bosco said he ships about 30 pounds every four months or so by UPS to ReCork, who covers the cost. Zino also recycles its glass bottles separately.

He doesn’t look for natural cork wines specifically. “I don’t go that far. I just throw all cork in there. There are some that are probably fake, but it’s hard to tell, so I just throw them in and they take what they want,” said Bosco.

“It doesn’t cost much and it doesn’t take much,” he said. “Every little thing helps to save it from [going into] the trash. Corks can be used for something else. It’s for our children, so they don’t grow up in trash.”

A renewable resource: Cork has a carbon negative impact, which means that growing, harvesting and processing it has a net result of removing carbon from the atmosphere.

Sustainable: It’s recyclable and biodegradable, and using it provides an economic incentive to preserve millions of acres of cork oak forests. These forests trap greenhouse gases, prevent desertification and provide habitat for thousands of species.

Cork facts: It comes from the bark of the cork oak tree.

Portugal, which is home to the largest collection of cork oak trees, is also the world leader in cork production.

Cork oaks absorb CO2 from the air like all plants do, but they are very good at it.