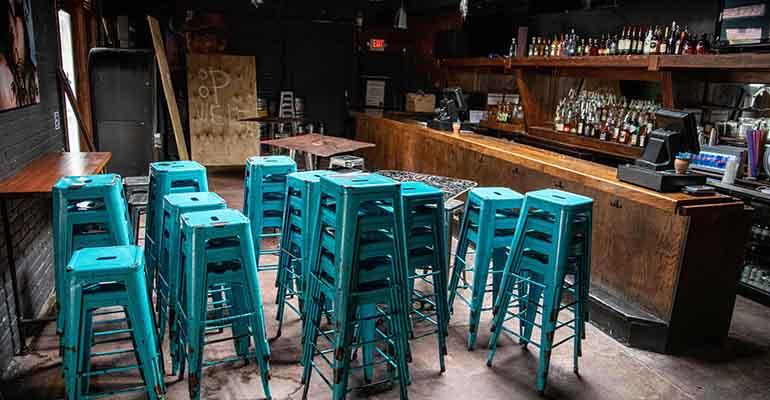 SERGIO FLORES / Contributor / AFP
A study by JP Morgan Chase makes a correlation between dining out and a surge in coronavirus cases which is a bad sign for the industry.
Operations

Opinion: The restaurant industry is facing a fundamental trust issue

This article does not necessarily reflect the opinions of the editors or management of Nation's Restaurant News and Restaurant Hospitality.

While restaurateurs and retailers are rightfully laser focused on keeping their doors open and their employees and customers safe, it can be easy to miss meaningful public policy and reputational developments buried in the daily torrent of COVID-related news. However, late last week some data was made public that should give the entire industry - from single-unit operators to corporate executives - some significant heartburn.

A team at JP Morgan undertook extensive analysis of credit card data and consumer spending habits over the past few months and overlaid that data on top of the new infection case tracker maintained by Johns Hopkins University. Keep in mind this database is one of the most frequently cited by the media, public health officials and policy makers. What the JP Morgan analysts found was quite disturbing. They were able to draw a direct correlation between the amount and frequency of in-restaurant spending and rates of new infections, and conversely, they found that the higher supermarket spending in a given region, the lower the infection rates. In short, the research showed that supermarkets were demonstrably safer and inferred that those who stayed at home to eat were facing lower risks. The study went on to say that in-restaurant spending was the single biggest predictor in a rise in new infections. Not good.

This data got some significant media attention and strong reactions from industry leaders, so this is not a “scoop,” but there is some important underlying context, especially in regard to industry public policy and reputational concerns that need to be fully understood.

For an industry whose business model and economic value to the country has been the subject of a continuous national conversation and outright demonization by much of the political left for decades, the COVID-19 pandemic, for all its personal and economic destruction, did give the country a rare opportunity to re-examine the industry’s value. And the early returns on that re-examination were overwhelmingly positive. The jobs the industry created and the services it delivered were judged “essential” by elected officials regardless of party or geography. Within 30 days of the pandemic, the industry had accrued more political capital and reputational standing than was accrued over the previous 30 years of PAC events, golf junkets and steak dinners. And we were smart with that capital, finding ways to work with policy makers to expand delivery, off-premise alcohol sales, outdoor dining, permit expediting and the list goes on. But we’ve got to continue being smart with it.

With rare exception, just about every industry leader wrestled with the difficult dilemma of reopening. Wait too long and the business could go under and those jobs would be lost forever. Jump back in too soon, risk a resurgence of the virus and likely increase the lethality and longevity of the economic havoc ahead. I don’t envy their struggle. By and large, the jury is still out on which way the industry should have gone, but recent actions by both red and blue state, governors pumping the brakes on reopening and re-establishing restrictions on the industry may be indicating that the jury may soon come back in with a verdict. And what they and the JP Morgan analysts are inferring is that at some level, we may be part of the problem. In fact, Governor Murphy of New Jersey specifically attributed the virus resurgence across the country in some degree to the “return of indoor dining” in numerous states. That is a very big change from March, April and May when the industry was deemed not only an important part of the solution but also “essential.”

To re-establish that credibility (and along with it the ability to help determine our own path) the industry needs to vigorously reassert itself as a serious player in the health and safety space. There was a time not so long ago when the most vigorous and ardent proponent of FDA model food codes, health and safety standards and stringent supply chain protocols was the industry itself. The industry talked about it relentlessly - and loudly. We argued then, and I was part of that chorus over 20 years ago, that the biggest threat to the industry was not wage and benefit hikes, not anti-smoking laws, not meals taxes and not anti-drunk driving legislation, it was the loss of public trust and confidence in the safety of the food chain. If we lose significant public trust now regarding the safety of our restaurants and the risk to consumers and employees, it will take the industry decades to re-establish it, if ever.

We need to play chess and not checkers. Let’s stop playing small-ball arguing about dining room percentages and social-distancing restrictions and limits on gathering numbers. Instead, let’s lead on mandating masks in every restaurant regardless of state, lead on mandated testing, on sanitation improvements, on PPE, on alcohol delivery certification and countless other issues. In every way, the industry finds itself at a very precarious crossroads - financially, politically, reputationally - and the future is uncertain at best. But what is certain is that the industry is at the precipice of a cliff - one that looks down into an abyss where large swaths of the consuming public may think our basic business model - one predicated on personal proximity and social interaction, the communal sharing of food, drink and fellowship and basic human connectivity - may put them at unnecessary risk. No political party or legislative relief package can prevent that. Only the industry can preclude itself from falling into that trap. It starts with making equally unenviable, serious and painful choices, but this time around, siding with long-term industry survival over short-term sales.