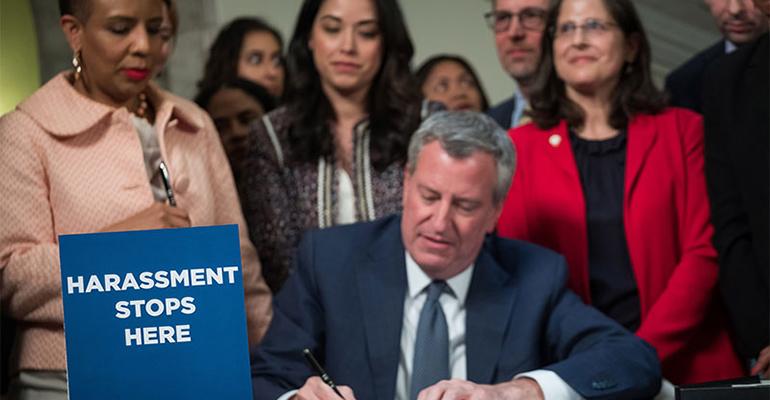 Training required for employers of 15 or more by April 2019

The package of 11 bills was approved by the city council in April.

Among them is legislation designed to educate New Yorkers about their rights, require sexual harassment data reporting from city agencies and to expand protections under the city’s Human Rights Law.

“Society has been stacked in favor of men for far too long, leading many to believe they can harass women without fear of punishment,” de Blasio said in a statement. “New York City will not allow that [to] continue. We are taking action to protect workers against sexual harassment and saying loudly and clearly that anyone who harasses a co-worker will face justice.”

Included in the package is a mandate that employers in the city with 15 or more employees conduct annual anti-sexual harassment training programs.

In addition, employers must display an anti-sexual harassment rights and responsibility poster, which will be designed by the Commission on Human Rights.

Fundamentally, workplace training ensures that workers know policies to prevent harassment exist and how to use them, said attorney Regina Faul of Phillips Nizer, who has been conducting training programs for a decade.

“It’s in an employer’s best interest to have a user-friendly and effective complaint procedure in place in order to ensure a harassment-free workplace,” she said. “As a result, the employer has better control over resolving complaints with the employees and addressing issues quickly and directly, instead of before an agency or court.”

As part of the 2018-2019 state budget, the New York Department of Labor will develop a model sexual harassment prevention guide and policy. All employers will be required to adopt the policy or establish policy that meets or exceeds the minimum standards, effective Oct. 9.

Starting in July, New York state employers will also be prohibited from using nondisclosure clauses in settlements or agreements relating to claims of sexual harassment, unless the condition of confidentiality is requested by the victim.

Andrew Rigie, executive director of the New York City Hospitality Alliance, said employers are still waiting on guidance on how to follow both the city and state mandates.

“While we support the anti-sexual harassment training, we hope the city and state reconcile their laws so New York City employers have one set of clear guidelines to follow,” he said.