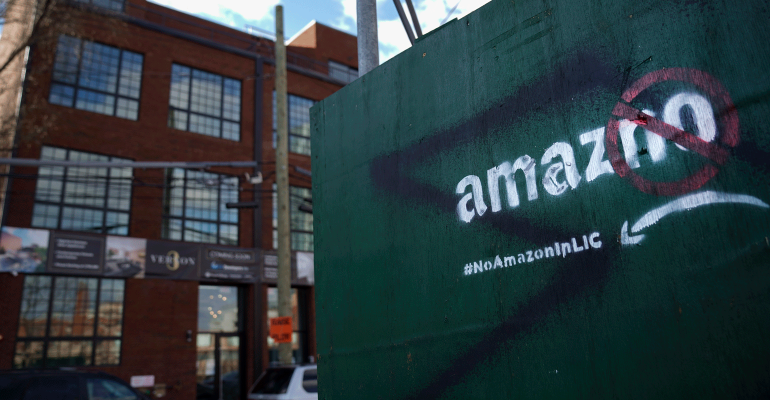 When Amazon initially chose Long Island City in New York as the site of its latest headquarters HQ2 — a massive project that would have included 8-million square feet of real estate, 25,000 new jobs and $3 billion in tax incentives for the digital retail giant — most New Yorkers were worried about their commute times, overcrowding, and inflated real estate prices. But for restaurants in Long Island City, the prospect of gaining a giant corporate campus as a neighbor was an opportunity to completely transform their businesses.

“Long Island City is beautiful but at the end of the day, it is a sleepy neighborhood,” said Robert Briskin, owner of Maiella, an Italian restaurant with two locations on the Long Island City waterfront that opened in 2015. “In the morning, there is a mass exodus as people go off to work in Manhattan, and then they come back during the evening. Until then, it’s a ghost town.”

When Amazon abruptly pulled out of its deal with New York earlier this month after mounting pressure from skeptical elected officials, local business owners were thrown off guard.

“All of the businesses in the area were totally shocked — it was the worst mistake for politicians to make for New York City,” said Miriam Porto, manager at Madera Cuban Grill, which opened in Long Island City in 2010.

As for how much her foot traffic would have increased if Amazon had moved into the community?

“Quadruple!” she said. “We don’t get much foot traffic around here at all. My customers come to the restaurant on the weekends because they go out in Manhattan after work. But we cannot make a profitable business off of only weekends.”

Right now, Briskin said, he does not bother opening Maiella for lunch because “there’s no point.” But with the announcement of Amazon’s HQ2 plans, he was dreaming of lunch specials, happy hours, corporate events, team meetings, and early dinner specials.

“We are just one little restaurant and we were dreaming of hiring 50 more people when Amazon came,” he said, emphasizing that his restaurant was just one block from the proposed project.

According to Alex Shvarts, founder and CTO of FundKite, a New York-based company that specializes in helping small businesses achieve working capital, many Long Island City businesses had already started implementing strategies to expand their brands in light of the promised foot traffic from Amazon employees.

Briskin, for example, estimated that the Amazon headquarters would have generated $2 million in revenue per Maiella location. He had also begun the process of opening a third location one block inland, but now he has abandoned the expansion project.

Shvarts suggested that restaurants should re-evaluate their business strategy now that they can’t rely on a new corporate campus as a crutch.

“If you’ve already invested in expanding, my advice is to re-evaluate, see how you can turn that around and readjust,” he said. “All you can do now is keep your customers happy and grow your current base.”

But for local businesses, the news is not all doom and gloom.

Paulina Loyo-Grigonis, who owns Gordo’s Cantina, a casual Mexican restaurant that opened in Long Island City in 2016, was actually relieved to see Amazon pull out of the deal.

She is approaching the end of her 10-year commercial lease and was concerned that her landlord would have raised their rent astronomically after Amazon increased real estate demand in the community.

“We would have had to move,” Loyo-Grigonis said. “But now we’re thinking we’ll be able to stay in the neighborhood a little while longer. Besides, all of this excitement and there’s no telling if Amazon employees would have eaten in the neighborhood — all of these tech companies have elaborate on-campus food courts. Nothing is guaranteed.”