Theater-restaurant company iPic Entertainment Inc. filed Monday for Chapter 11 bankruptcy protection, seeking either a sale or a restructuring of debt.

The Boca Raton, Fla.-based iPic, which has 16 theaters and 123 screens in nine states, filed its Chapter 11 petition in United States Bankruptcy Court in the District of Delaware, will continue operations during the court proceedings, the company said, adding that it expects the restructuring process to take 90 to 120 days.

“Current management will remain in place to work alongside the company's restructuring advisers, and business will continue uninterrupted,” the company said. 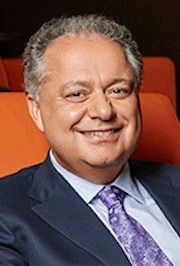 “To ensure an exciting future for iPIC for the benefit of our guests, members, employees and other partners, we have hired top consultants and advisers to find a partner who shares our vision,” said Hamid Hashemi (left), founder and CEO of iPIC Entertainment, in a statement.

“Our brand is thriving and leads the industry in popularity, but our balance sheet needs to course correct,” Hashemi said. “Our theaters will remain open during this transition, our employees are being paid, as are our vendors and suppliers.”

“iPic's business plan called for building 25 locations in four to five years,” he said. “Delays in development cycle combined with the high cost of capital depleted iPic's available resources before the company was able to reach critical mass and become self-funded. Importantly, delays related to the Delray Beach [Fla.] location, resulted in unforeseen costs and a significant slowdown in circuit-wide development and new grand openings.”

The company was established in 2010 and has theaters in Arizona, California, Florida, Illinois, Maryland, New Jersey, New York, Texas and Washington.