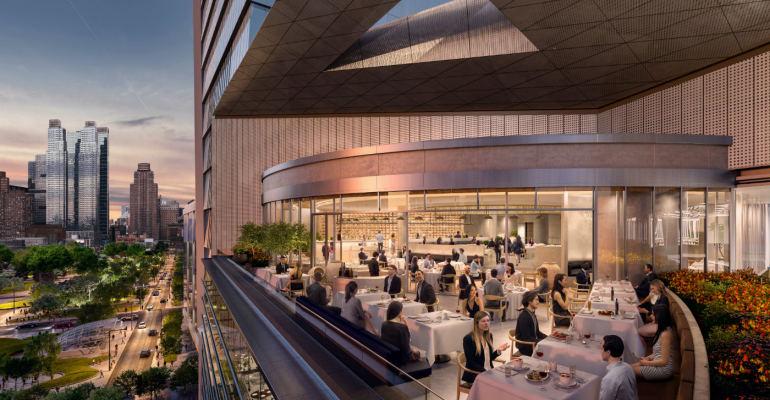 Everything we know about the 25-eatery complex opening next month

Hudson Yards — the largest private real estate development complex in American history — will be opening the first phase of its 18 million square-foot upscale dining, shopping, and entertainment district to the public on March 15.

With more than 25 food options from celebrity chefs like José Andrés, David Chang, and Thomas Keller, regional chains and independent eateries that run the gamut from counter-service to fine-dining, Hudson Yards aims to become a culinary mecca for tourists and locals alike. Here’s what we know so far about the massive project, operated by Related Companies and Oxford Properties Group:

Hudson Yards isn’t just another dining and shopping complex: the real estate development aims to create an entire neighborhood out of the West Side yards neighborhood of Manhattan, with plans in place for 4,000 residential apartments — including both luxury and affordable housing — 14 acres of parkland, office space, a public school, an Equinox hotel, and an arts and entertainment space, The Shed, that will be opening April 5, and is already selling tickets to events.

The visual center of the Hudson Yards complex is represented by a bronze-hued architectural landmark designed by Thomas Heatherwick and Heatherwick Studio, temporarily named The Vessel. The honeycomb-like structure is dotted by a mile of interlocking staircases and is free to the public for climbing and taking in the views of lower Manhattan.

While the complex is far from complete, the Shops & Restaurants at Hudson Yards at 10 Hudson Yards will open on March 15, comprised of more than one million square feet of high-end and mid-range fashion brands, along with the highly anticipated restaurants and eateries from celebrity chefs. 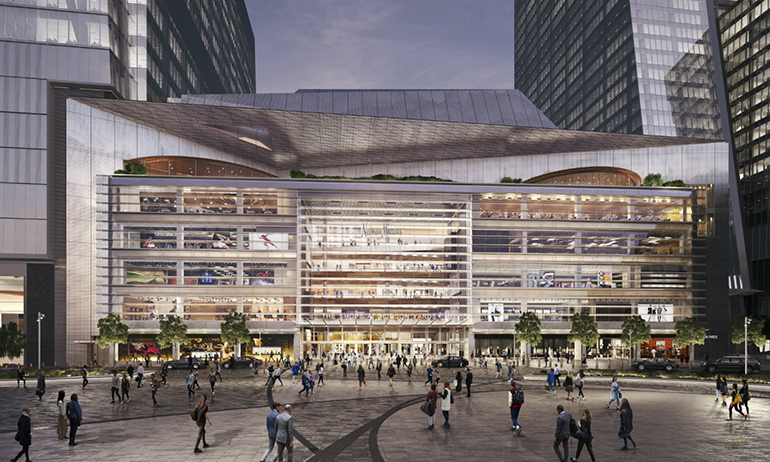 Leña is a paella restaurant with a focus on the iconic Spanish rice dish, along with fire-grilled meats, fish, and vegetables cooked over a wood-fired pit. Mar is dedicated to seafood and will feature fresh daily selections flown in from Spain, including menu items like live scallops, sea urchins, and fisherman’s stew. Spanish Diner is a casual all-day eatery featuring outdoor seating underneath the Highline and comfort food like Spanish tortilla and huevos revueltos (scrambled eggs) or huevos a la Cubana (rice, fried egg, plantain, and tomato sauce).

The array of eateries inside the Hudson Yards Shops & Restaurants building were curated by chef Thomas Keller and restaurateur and developer Kenneth Himmel. Thomas Keller’s dining concept will be a retro-inspired upscale dining experience called TAK Room, but he won’t be the only big name to grace the Hudson Yards complex.

David Chang is bringing two entirely new concepts from his Momofuku empire to Hudson Yards: Kāwi, a 5,000-square foot restaurant from executive chef Eunjo “Jo” Park with culinary inspiration from the Baegyansa Temple in Korea; on a more casual level, Momofuku fans will also be able to get sandwiches and kimbap (a Korean rice and vegetable snack rolled in nori) at Peach Mart.

The Hudson Yards complex also recently slated James Beard award-winning Le Coucou chef Stephen Starr to run the culinary and bar operations at the upcoming Equinox Hotel, which is set to open in June 2019, according to Eater. Although not many details are known about Starr’s vision for the hotel restaurant, Equinox described the offerings as focused on seasonality with drinks “designed around health-building elixirs.” The Hudson Yards team declined to comment further on the concept.

But Wild Ink is not the only Rhubarb concept coming to Hudson Yards. Looking into the future, Rhubarb will also be opening an as-of-yet unnamed 10,000-square-foot restaurant at the top of the towering 101-floor 30 Hudson Yards skyscraper, featuring a 360-degree observation deck. Hudson Yards declined to comment further on this upcoming project. 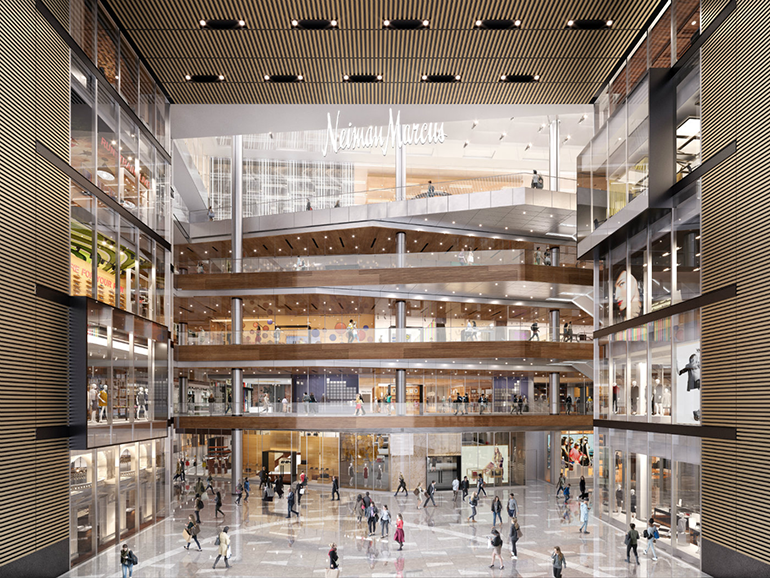 Cook & Merchants is a grab-and-go spot featuring soups, salads, and sandwiches from Maury Rubin’s City Bakery, coffee from Irving Farm and a selection of on-tap beers, gourmet chocolates, and a rotating wine selection.

Zodiac Room is the most upscale of the three Neiman Marcus brands and will feature menu items from 45 Neiman Marcus restaurant locations around the country, with each meal starting with an aperitif of chicken broth and popovers with strawberry butter from a roaming cart. The menu itself features seafood, oysters, caviar, and plant-forward options, and the restaurant will offer an afternoon tea meal, as well as lunch and dinner.

Although Hudson Yards will not feature many mom and pop eateries in its sprawling complex, 10 Hudson Yards will house an outpost of William Greenberg Desserts, an Upper East Side bakery known for its black and white cookies, and Hudson Yards Grill from Himmel Hospitality Group and chef Michael Lomonaco. This brasserie will serve all-American fare including a $19 burger made with Pat LaFrieda meat, a $25 lobster roll, rotisserie chicken and rotating specials like suckling pig, according to The New York Post.

Although there will be plenty of restaurant options to choose from starting in March, there are still more eateries in development. Queensyard — a four-restaurants-in-one concept from British restaurant group D&D London — is coming soon to Hudson Yards, according to Eater. The 11,000-square foot concept will feature The Kitchen, a British comfort food restaurant; The Dining Room, a New York-tweaked British eatery featuring tea, beef filets, and truffle toast; a casual all-day eatery called Café & Wine Bar; and Cocktail Bar featuring live music and gin cocktails. The Hudson Yards team declined to give further detail on the project.