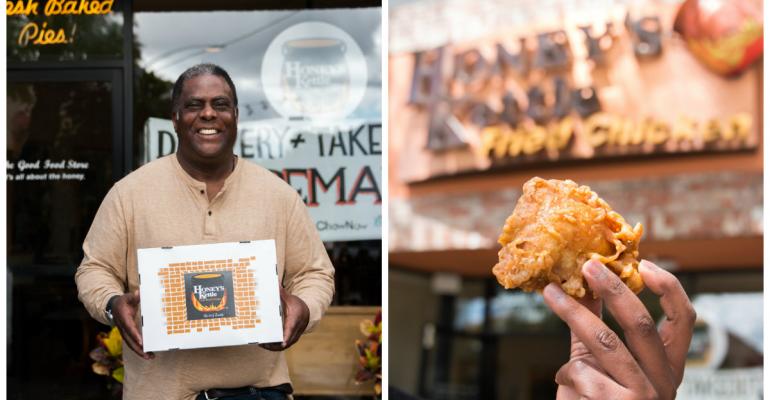 Sophia Criswell
Honey's Kettle Fried Chicken is expanding for the first time in its 20-year history in Los Angeles.
Operations

When COVID-19 hit in March, Vincent Williams, the owner of Los Angeles-based, fast-casual concept Honey’s Kettle Fried Chicken, was planning on expanding his business with both virtual and traditional brick and mortar restaurant locations in new markets throughout Southern California and Arizona. But by the start of the coronvirus-related lockdowns, his sales had dropped by 60% overnight and he had to pivot to off-premise orders of fried chicken to stay afloat.

“I have a lot of experience with dealing with adversity so COVID-19 was just one more thing,” Williams said, indicating that he felt prepared for the pandemic-related challenges because they were already on multiple digital platforms for takeout and delivery. “We’ve come out looking good so far. [This experience] gave me some research in terms of how we would morph into a virtual kitchen because our restaurant had transformed into takeout and delivery-only.”

Despite the initial challenges related to the pandemic, Honey’s Kettle Fried Chicken's ghost kitchen expansion plans are moving forward as anticipated. Now, after 20 years in business, Williams has finally opened up his second location, a ghost kitchen in Downtown Los Angeles, with a second virtual kitchen to follow in Hollywood this August.

Aptly named Honey Drop Kitchens, these ghost kitchens will feature a more limited menu of Honey’s Kettle Fried Chicken favorites (for example, with rice instead of mashed potatoes because rice can be made quicker and in bulk more easily) and will expand Honey’s Kettle Fried Chicken delivery zone to six miles. Other new menu highlights to the virtual restaurants include the Biscuit Bake, with chicken, eggs, and sausage baked into a biscuit. While the average check at the original restaurant is $25 per person, the Honey Drop Kitchens could differ on average guest check.

Calling the two new ghost kitchen locations “relief valves” for the increasing popularity and demand of his  original Culver City brick and mortar restaurant, Williams said that the pandemic made it ever clearer to him that virtual restaurants were the future for an industry that had so much to risk and to lose during times of crisis, and even when navigating the "normal" challenges of business operations.

“The benefit [of the virtual kitchens] was to be able to have further reach without putting in incredible investment and taking a huge risk,” Williams said. “I can’t imagine being in the middle of a hugely expensive project when something like COVID hits.”

He added that it was a no-brainer in terms of time and money investment because while building out a brick and mortar location could cost $1 million and 18+ months to get going, they could rent out space in a co-op ghost kitchen for a fraction of the cost and be up and running within 60 days.

This strategy won’t just be limited to the two new virtual restaurants that are opening this summer, however. Williams plans to expand Honey’s Kettle Fried Chicken to new cities and markets throughout Southern California and Arizona over the next five years. In each new city and area that they expand to, Williams said, he will purchase (instead of rent out) a storefront and build a physical flagship location to anchor their presence. Then, he will open up virtual ghost kitchens to fan out and expand the delivery and pickup capabilities of the first physical location.

“Once we get our roots in the ground through these virtual kitchens, we will march right on forward,” Williams said. “We are opening these places off a credit card because it simply does not take the same type of capital and investment as it does with traditional brick and mortar. We want to take advantage of this tsunami of a situation and make the enemy our friend in order to really take off as a company.”

Williams said that in the future, he sees Honey’s Kettle Fried Chicken as a national brand with a virtual presence similar to Amazon: if you want to order their fried chicken and other comfort food you’ll be able to (in most places) get it delivered straight to your door without having to actually live near one of their restaurants.

For a one-unit restaurant, his plans may seem “pie in the sky" for now, but Williams is confident in his vision: He said that the fact that as restrictions began to lift, the line for fried chicken at Honey’s Kettle Fried Chicken has oftentimes stretched a block and a half long, is proof that they have outgrown operating just one unit. It has been difficult just to keep up with demand, Williams said.

“I don’t think of us as just a restaurant,” he said. “We’re a food production facility and we produce food by the ton.”