/sites/all/themes/penton_subtheme_restaurant_hospitality/images/logos/footer.png
Recent
Recent
Sam Oches named Editorial Director, Editor in Chief of Nation’s Restaurant News and Restaurant Hospitality
May 10, 2021
Flavor of the Week: The Negroni: The boozy cocktail from Italy
May 10, 2021
New on the Menu: Seafood sliders, watermelon salad and spiced green beans
May 07, 2021
More than 186,000 restaurants and bars have already applied for the Restaurant Revitalization Fund
May 05, 2021
Here’s what it’s like to apply for a Restaurant Revitalization Fund grant
May 04, 2021
Featured
Alternative delivery players challenge third-party delivery stronghold
May 04, 2021
The new maximalism: Will restaurant design do a 180 into rebellious excess?
Apr 22, 2021
Pat Martin, chef and owner of Martin’s Bar-B-Que and Hugh Baby’s, discusses the business and meat supply of the coronavirus pandemic
May 05, 2021
Eleven Madison Park in New York City to reopen with meatless menu, chef and owner Daniel Humm says
May 03, 2021 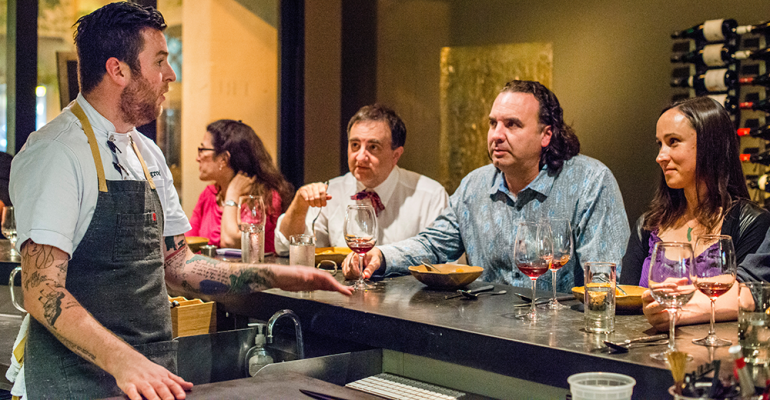 Operators are turning to tickets, memberships and incentives to ensure seats are filled

Six years ago, chef Jason Quinn started an invitation-only restaurant next door to his critically acclaimed Playground, an edgy casual-dining venue known for its uncompromising “no substitutions” menu in Southern California.

Initially, the pop-up restaurant, which Quinn called Playground 2.0, was aimed at ardent Playground fans who understood the culinary madness of the rising star chef. Each dinner was themed and featured more than a dozen courses. Six months later, as demand surged for a spot at the 18-seat chef’s counter overlooking the kitchen, Quinn opened Playground 2.0 to the public with one caveat: He made it a ticketed event, asking guests to prepay up to $350 per person.

Quinn, who opened his first restaurant after winning Food Network’s “The Great Food Truck Race” in 2011, is a pioneer when it comes to how restaurants are rethinking reservations and serving niche audiences.

Some are creating membership-only experiences or prepaid dining events to ensure that VIPs always have a seat at the table. Others are relying on incentivized marketing platforms to bring in guests during off hours.

Dishes at the Playground 2.0 use expensive or hard-to-source foods for the multicourse chef’s table format. (Anne Watson Photography)

Fundamentally, the goal is to avoid costly losses tied to last-minute no-shows, but also to build loyalty at a time when the inability to book a hot restaurant could prevent some diners from coming back.

“The reservations game is about to get wild,” said Nick Kokonas, co-owner of The Alinea Group, parent of Michelin-starred restaurant Alinea in Chicago.

Kokonas, who is also co-founder of the reservation platform Tock Inc., has been a long-time advocate of using prepaid ticketing for reservations.

In 2011, the Chicago restaurateur created an in-house reservation program to manage prepaid bookings at his then-new restaurant Next. A year later, he added the software to his critically acclaimed restaurant Alinea. The Chicago fine-dining venue achieved its first Michelin three-star ranking in 2011 and has maintained it ever since.

Yet even with those top culinary credentials, Kokonas said he was losing $800,000 a year due to cancellations and no-shows.

Kokonas, whose other restaurants include The Aviary, Roister and The Aviary NYC, said prepaying resolved the pain of losing money after last-minute cancellations, or when two people showed up to a six-person reservation.

At Alinea, for example, nightly no-shows accounted for about 12%-15% of reservations. Now, with the prepaid system, it’s less than 1%.

In 2014, he decided to turn the company’s in-house reservation system into a business, selling the software to other restaurants. Tock Inc. initially was a reservation platform focused on prepaid reservations, but services have expanded to also include traditional bookings and those that ask for a guest deposit. 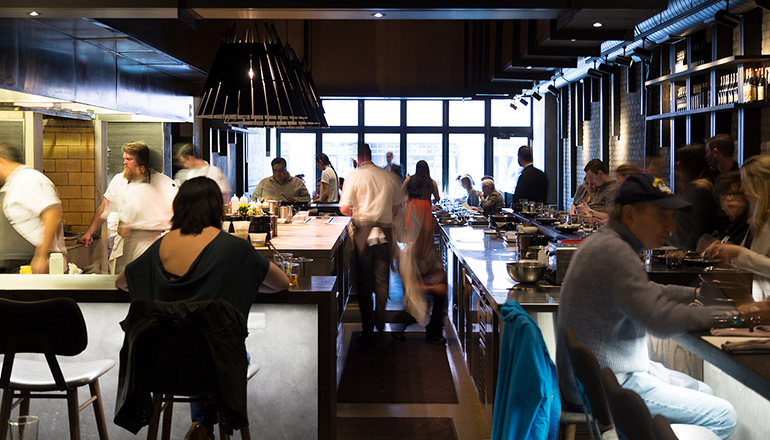 Alinea’s prepaid program has cut no-shows from as much as 15% to less than 1%. (Credit: The Alinea Group)

Tock charges up to $699 a month. The fee depends on the type of service being used: free, deposit or prepaid reservations. Sometimes, restaurants use a mix of all three.

Alinea and Next, for example, use Tock’s fully prepaid feature, while Aviary and Roister use a mix of Tock’s services: free, deposit and prepaid for premium experiences. The latter is designed for special-occasion holidays like New Year’s Eve or wine dinners — events that are harder to fill if you get burned by a no-show.

“The magic of Tock is that you can easily configure ordinary [free] reservations next to something like a [prepaid] chef’s table,” Kokonas said.

Of the 1,000 restaurants that use Tock, Kokonas said 40% use the prepayment.

For Quinn at Playground, guests pay up front anywhere from $200 to $350 for the intimate communal dinner, which they purchase with a leap of faith because Quinn never releases a menu — only a theme. Often the title of the night provides a clue of the meal ahead, including “Ultimate Steak Dinner” or “Veggies are Awesome.” But sometimes the theme is “Trust,” meaning you must believe Quinn and his team will deliver an unforgettable coursed meal based on whatever is inspiring them that week. For example, one session was themed around the foods Quinn tried while traveling to Australia, Japan and China.

Asking guests to pay up to $350 for a dinner they haven’t eaten yet does not appear to be a disincentive.

“If anyone is resistant, we wouldn’t know. We’re sold out every night,” Quinn said.

While customers don’t resist paying up front for the “culinary theater” of Playground 2.0, he said diners would likely object to prepaying at the more-casual Playground, which he opened in Santa Ana, Calif., in 2011. The restaurant features an eclectic menu of seasonally driven shared-plate dishes ranging from $6 pork belly steam buns to a $35 whole butterfish.

“Partially paying your dinner in advance is so foreign, there’s no question there would be resistance” Quinn said.

That was one reason for testing Playground 2.0. In the beginning, Quinn said Playground 2.0 was “misunderstood” as an elitist concept. But the reality is, he created the prepaid event to prevent last-minute cancellations for the luxury dining experience.

Playground 2.0 is a multicourse chef’s table experience where dishes feature expensive or hard-to-source foods such as roasted suckling pigs and premium cuts of beef. No-shows would mean throwing out food and profit.

“We need to be sure that tickets are going to be sold,” Quinn said.

THE PERKS OF MEMBERSHIP

Other restaurant owners face different dining problems: How to accommodate regulars when their restaurant is booked nearly every day.

Since opening in 2013, Arc in Costa Mesa, Calif.— known for its fire-roasted dishes — is packed daily with hour-long waits for walk-ins on weekends. 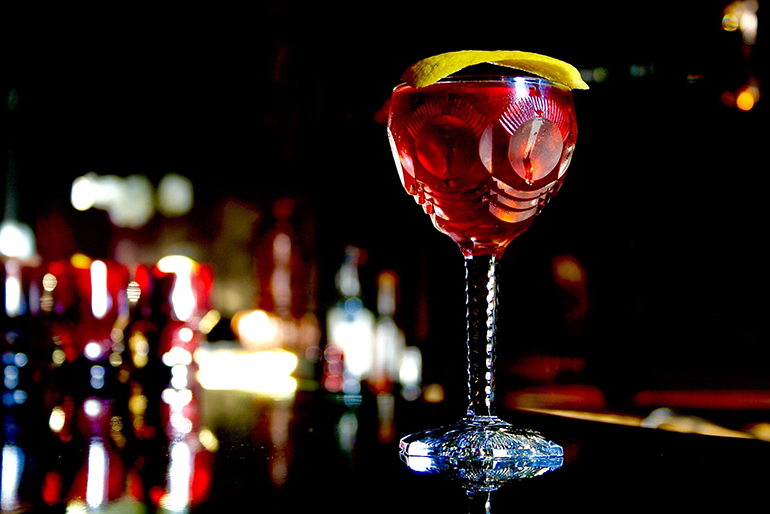 To alleviate the crunch, owners Noah and Marín von Blöm two years ago created a membership-only restaurant next door to Arc called The Guild Club. Initially, it was meant to be a members-only experience that pays homage to a 19th Century “gentleman’s club” with a high-end menu featuring caviar service, craft cocktails, Russian vodkas and premium whiskeys. The average per person check is $50, about $12 more than Arc.

Roughly 48 members pay $5,000 per year for priority access to the restaurant. Chef Noah von Blöm said paid members, who are VIPs of Arc, wound up using The Guild for private power lunches.

“That was a big surprise for us,” he said.

The members-only policy didn’t last too long. Eventually the husband-and-wife team loosened the rules, opening the opulent 17-seat space to non-paying members especially when the 70-seat Arc is experiencing crowds.

When managers spot VIP diners waiting for a table at Arc, they quietly ask them if they’d like to grab cocktails and appetizers at The Guild, which has a hidden door entrance like a speakeasy.

Some diners who love the intimate and “sexy” atmosphere of The Guild, often ask if they can stay and dine at The Guild, which offers Arc’s menu along with exclusive craft cocktails.

The von Blöms said they will let diners stay for dinner if there’s room, and if it doesn’t interfere with a member’s reservation. 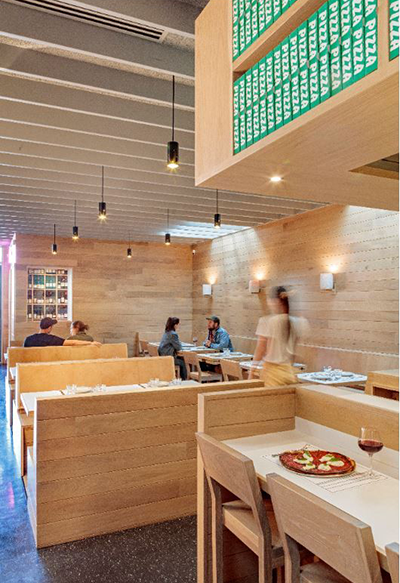 In Los Angeles, Jon & Vinny’s (left), a concept by the same owners behind the famed concept Animal, began promoting the Fusilli Club earlier this year when it opened its second Jon & Vinny’s outlet in the high-end Brentwood neighborhood, home to many of the Hollywood elite.

For $250 a year, Fusilli Club members get a standing reservation slot every week. Members sign a contract that outlines penalties such as being charged $100 per person for no-shows and late cancellations. The member will also be charged an 18% service fee.

“It’s been a great solution for our regulars,” restaurant spokeswoman Brianne Chan said.

But even the most in-demand restaurants can have trouble getting bookings during off-peak hours.

In New York, some fine-dining restaurants are turning to a new reservation platform called Seated to keep seats filled.

The New York-based booking software works like travel-aggregating sites, such as Expedia or Kayak, said founder and CEO Brice Gumpel. It doesn’t replace reservation systems like OpenTable or Resy. Instead, it works with each restaurant to get real-time updates on bookings and uses incentives to lure diners.

Consumers booking with the site earn “seeded” money or points that can be redeemed for gift cards ranging in denomination from $15 to $50 for brands such as Apple, Lululemon, Lyft, Amazon, Starbucks, Target, Zara, Callaway, Best Buy and Sephora.

Seated splits the cost on the gift cards with the restaurants, who pay between 10% and 40% of total check per referral.

Gumpel said Seated has generated $7 million in new revenue to New York restaurants since he launched the app in June 2017. Today, it serves more than 400 restaurants in its core New York City market. It is slowly expanding to new metro areas including Boston, Philadelphia, Atlanta and Chicago.

Seated offers new marketing channels for restaurants, which is crucial in today’s stay-at-home economy, he said.

“You get your groceries delivered. You get your meal kits delivered,” he said. “It is easier more than ever to eat a meal outside a restaurant.”

All Day Kitchens has now raised $37.5 million and plans to expand into Chicago and Texas
May 12, 2021

The Small Business Administration is awarding $2 billion to 16,000 restaurants in the first wave of Restaurant Revitalization Fund grants
May 10, 2021