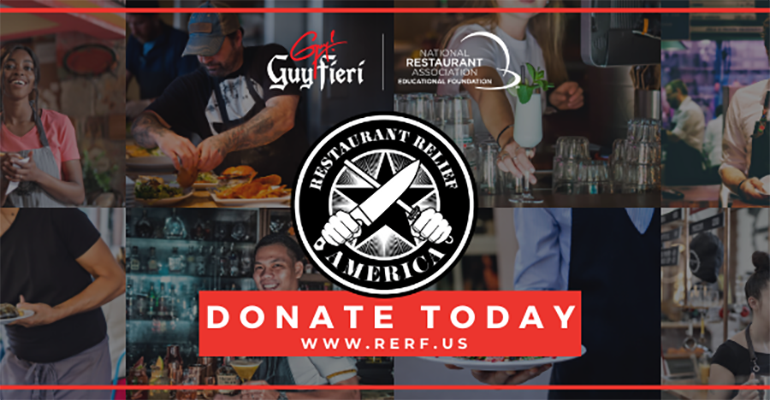 John Krasinski boosts the profile, and pot, of the NRAEF and Guy Fieri's restaurant employee relief fund this week.
Operations

Despite fits and starts, fund gets a boost from Some Good News, a YouTube show by ‘The Office’ alum John Krasinski

After an initial roadblock when the site was overwhelmed within the first few days, RERF has been processing grants and delivering much needed cash to former restaurant workers for over two weeks now, said Rob Gifford, NRAEF president.

This week, the fund got a celebrity boost from former “The Office” actor John Krasinski’s new YouTube show, Some Good News, or SGN. This week’s restaurant-focused episode included guest appearances from Fieri, along with Momofuku Group founder David Chang, food personality Martha Stewart and actor Stanley Tucci. On the show, Krasinski also announced that PepsiCo had donated $3 million to RERF, bringing the fund to $20 million.

“That gave me goosebumps,” said Fieri in the video.

Thanks for havin’ me on @johnkrasinski! Had a blast joinin’ in on the @somegoodnews potluck! https://t.co/lagaKgkAdd

Launched on March 27, RERF is among many hospitality employee relief efforts across the country. But it has grown with the support of the industry and big backers, along with social media pushes by famous chefs, a Now This video with almost 400,000 views and celebrity endorsements.

Opened for applications on April 2, the fund was initially set up as a one-time, $500 grant for restaurant workers to use within three weeks on housing, medical bills, student loans or other expenses. The grants were awarded on a “first-come, first-serve basis” but the site was overwhelmed with applications immediately and forced to close down.

“[Running a relief fund with everyone remote] is not without its challenges and it’s certainly not for the faint of heart but we really believe in what we’re doing,” said Gifford.

However, on April 9 the application process was reopened with a more user-friendly experience using registration rather than full applications initially. The registration was at 63,000 before being closed again.

As of publication, 47,000 applications have been submitted after approval from registration. The team of 30 people at NRAEF can review more than 10,000 a week, Gifford said.

The first award notice went out the third week of April and workers are beginning to see checks. To date, 10,000 people have been approved and notified.

“The Pepsi gift allowed us to hit a really important milestone, which is $20 million in pledges received,” said Gifford. “Once that’s turned into cash, that’s 40,000 lives impacted and we’re continuing to fundraise against our goals.”

To be eligible, hospitality workers must have been employed in the restaurant industry for at least 90 days, had a significant loss of income due to COVID-19 and they have to be able to document it. Income loss might include a cut in hours, or reduction of 50% or more in pay, for example.

Applications are being judged on eligibility and “not all 63,000 people who apply for the fund are going to be proved eligible,” said Gifford.

On the SGN show, which has had almost 2 million views since Sunday, Krasinski noted that the restaurant industry is the second largest private-sector employer providing jobs for more than 15 million people. The NRA estimates more than 8 million restaurant employees were laid off or furloughed by mid-April and that two out of three in the industry have lost their jobs.

The show highlighted both small independent restaurants joining the cause to support those workers and bigger organizations like José Andrés’ World Central Kitchen, which to date has served more than 3 million meals to those in need during the pandemic.

“These are the people who once defined your neighborhood,” Krasinski said, “and are now defining humanity.”

Here we go! Episode 5 of @somegoodnews is so good... You can smell it! Welcome to #SGNcooking !!!https://t.co/rPLYDwiHP7