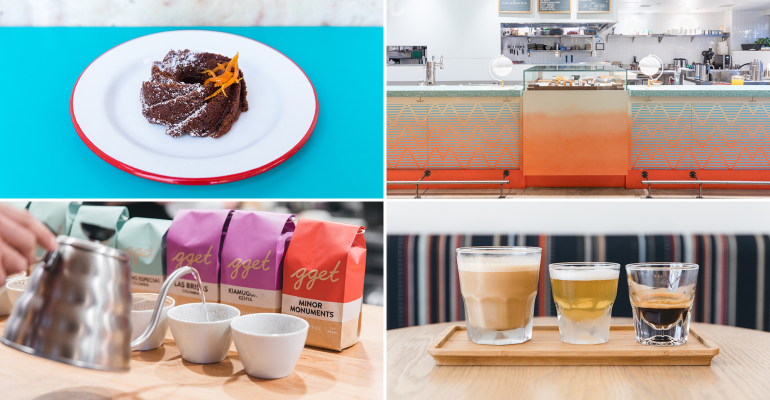 Start Slideshow ›
With 8 units and plans to grow to 75 in five years, this coffee company is all about its customers

Go Get Em Tiger is a Los Angeles-based coffee chain that isn’t trying to compete with Starbucks – it’s trying to transform the coffee industry with service and quality.

Two former Intelligentsia workers founded the company when they realized that people “just wanted this part of their day to be better” according to Kyle Glanville, one of Go Get Em Tiger’s co-founders.

Glanville, along with Charles Babinski, founded the company in 2013 to serve the population of Los Angeles their specialty coffee in a comfortable environment. Self-described as members of the third-wave coffee movement — the movement focusing on craft coffee beverages with sustainably-sourced beans, emphasizing quality over caffeine — Babinski and Glanville work hard to ensure their coffee tastes the way they planned.

“We think of our coffee menu in the same way someone would curate a wine menu,” said Glanville. “A lot of third wave coffee shops feel like if the menu was a beer menu, it would be a lot of IPAs and I think for us, we want something for everyone.”

This means coffee blends that veer towards the sweet variety that have been carefully chosen.

So how to they achieve high service and quality?

The set-up is this: customers come to the bar and sit or stand, then are approached by a staff member. It’s here that customers order their beverages or food — no lines necessary.

At busy times, workers come out from behind the bar with tablets to serve every customer.

“Once you get used to the notion that at a coffee shop you don’t have to find a warm body and stand behind it until your name is called, it’s just way easier and way nicer,” said Glanville.

“Our format gives people permission to come in alone and be solo and consuming a meal, which is something that we didn’t quite realize the power of when we did it,” said Glanville. Food options include a salmon tartine and yeast waffles.

At the moment, expansion plans are broad. The chain plans to open up to 30 stores across Los Angeles by the end of 2021 and reach 75 units in the next 5 years with a possible expansion into two undisclosed markets.

Babinski and Glanville want to be a mainstay in their native LA.

“We love LA and we just want to serve it. By growing locally and not spreading ourselves too geographically thin, we have an opportunity to not only expand but maintain and improve the quality of the product we’re offering,” said Glanville.

The founders are conscious of their impact on the environment­.

In 2020, Go Get Em Tiger hopes to introduce a cup initiative with a closed loop that’s already in development.

For a small amount of money, customers will be able to purchase a reusable cup. Upon returning, customers would turn in their cup to be washed in the back and would receive a fresh cup.

This would eliminate the issue some chains have faced with their own reusables when it comes to food safety. Containers that aren’t washed in the restaurant itself need to be handled differently which can cause a slowdown, something that isn’t desirable in a coffee shop.

When the brand was founded seven years ago, glass jars were given out to customers with a $1 deposit. As the brand grew and expanded, this strategy wasn’t feasible. However, the environment was never far from their minds. The chain introduced paper straws several years ago but stopped the practice after strong customer backlash.

Third wave coffee is all about quality and, according to Glanville, “coffee is just better out of porcelain or glass.”

Part of Glanville and Babinski’s goal was to open the specialty coffee experience to everyone and allow their coffee to be available at home. So they took things to the internet, their website specifically.

How-to coffee videos instruct customers how to brew coffee at home (Go Get Em Tiger has its own coffee subscription service and roastery where it works with local growers to develop specialty roasts) as well as open their eyes to different milk preparations.

See what this chain is doing in LA.