RH Celebrates 100 Years
brought to you by 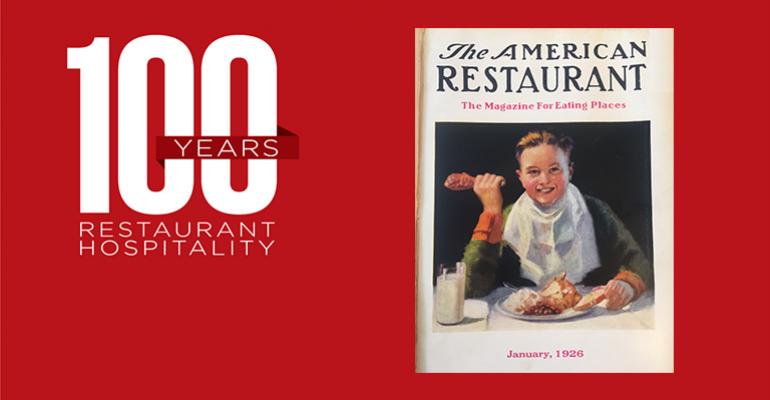 Earning your daily $12.50 profit and other lessons from the past

One of the first restaurant industry surveys in the modern, post-Prohibition era offers perspective

In 1926, this magazine — which was then called The American Restaurant — conducted a survey of the “public feeding industry.” At the time, what later became Restaurant Hospitality was only seven years old, having been founded in 1919 by C.A. “Pat” Patterson, whose family generously shared this survey.

In 1926, there were about 90,000 restaurants, cafeterias, lunch rooms and tea rooms in the United States, according to the survey.  That count included 4,200 industrial plants that fed workers; 13,500 schools and colleges operating cafeterias; 6,500 clubs with restaurant service and 25,000 confectioners and druggists “serving light lunches.”

In addition, there were also 11,233 hotels maintaining dining rooms or some restaurant service.

So, on average, there was one restaurant for every 750 of the population, the survey estimated.

But there were also some interesting details about the typical restaurant business at the time:

There were 8 billion meals served in restaurants per year in America.

The average cost for furnishings and equipment was $50 million per year for the industry as a whole, meaning the average cost per seat was $100 or $5,000 per restaurant.

Today there is roughly one restaurant per 495 people in the U.S., based on The NPD Group’s ReCount estimate of 655,755 commercial restaurants last year. The National Restaurant Association estimates more than a million restaurant locations, however, which would put that ratio closer to one for every 327.

Some make the argument that’s too many restaurants. In the recent book “Burn the Ice: The American Culinary Revolution and Its End,” author Kevin Alexander argues the industry is ripe for correction — the kind of correction that economic recessions inevitably bring. And many say a recession is coming.

But the American Restaurant survey from 1926 actually offers some reassuring perspective.

At the time, the modern restaurant industry was just taking shape after Prohibition took away the biggest profit source, as most restaurants — even lunch rooms — sold liquor or at least beer.

“With the elimination of this big profit, only scientific operators could survive, and restaurant owners were quick to put their houses in order,” the survey said.

But the industry did survive, and in fact thrived, by learning how to make a profit with food, though of course alcohol later came back into the picture. And the industry will survive the next down cycle too, whether that comes as a result of restaurant glut or recession (or both), so long as operators stay “scientific” and keep their houses in order.

For the past 100 years, Restaurant Hospitality has borne witness to an industry that is ever nimble and ready to roll with the punches. So keep reading and be prepared.

TAGS: Back of the House
0 comments
Hide comments
Related