There are no quick fixes to changing a company’s culture

It’s a pretty common scenario: A restaurant guest — a good-natured, pleasant guy, and a regular — falls into his normal patter of off-color, sexist jokes. For years, this has been accepted behavior. The guest means no harm and he tips well, but many women around him, and probably a lot of men, feel uncomfortable, and it’s not acceptable anymore.

Neither are ethnic jokes, or treating people of different races, genders or sexual orientations better or worse than others. Those common practices are now recognized as problems. So is having management that’s radically different in terms of race, ethnicity and gender than rank-and-file employees.

Beyond that, being non-racist isn’t enough anymore. Now many restaurant workers and customers expect management to be anti-racist — to actively work for a society that is more inclusive and fair.

To help illustrate how operators can make progress on the difficult journey toward a more inclusive society, James Pogue Jr., a diversity, inclusion and bias consultant and founder of JP Enterprises, shared the stage of Restaurants Rise Powered by MUFSO with two executives from Union Square Hospitality Group: president Chip Wade and chief people officer Patti Simpson. The panel was sponsored by Chobani Foodservice.

“Diversity is being asked to the party, but inclusion is being asked to dance,” Pogue said — a metaphor he said was coined by another diversity & inclusion trainer, Verna Myers – indicating that it’s not enough to have a workforce of many backgrounds. You also must make sure that everyone is welcomed and respected for their differences, and engaged with and involved in the work at hand. 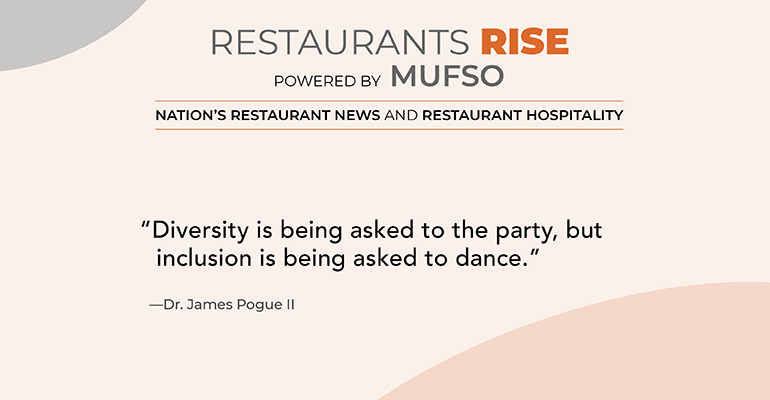 He said not asking those questions is a sign of unconscious bias — assuming that your way of doing things is the best way, and acceptable to everyone, or that people of different backgrounds might not be as good at something as people who share a similar background to your own.

Concerns about these biases, and about passivity in the face of the social upheaval that was ignited by the murder on May 25 of George Floyd, an unarmed Black man, by Minneapolis police, has forced many restaurateurs to face these issues with their staff and customers.

Simpson said Floyd’s murder brought home to her that USHG’s management was deficient in seeing the needs of some of its employees.

“It hit me that day that we were asking people with such heavy hearts, people of color in our businesses, to come in and smile while they chopped onions,” she said. “And their hearts were so full of something so much more important, and up until that moment, I hadn’t recognized how painful it must have been for them not to have us recognize their pain.”

Since then, upper management has been surveying and training the employees of USHG — a company that had 2,700 employees before the coronavirus pandemic and now is down to 240 — and also listening to them.

Wade has held video-conference meetings with employees called “Chat with Chip,” in which these issues have been discussed openly, and with leaders showing their own vulnerability. 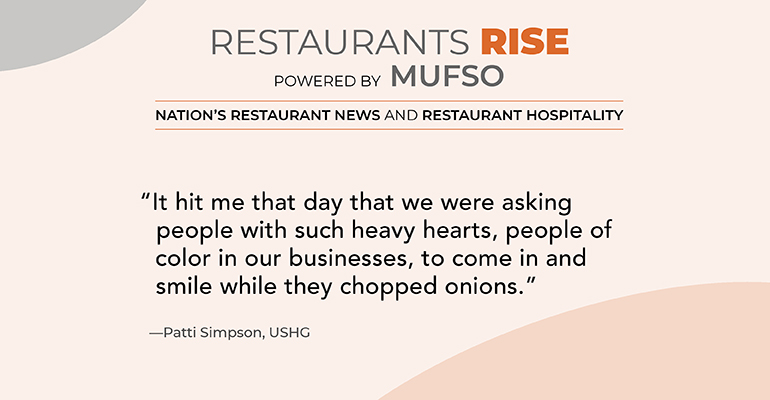 “I began to tearfully cry [about] what George Floyd’s death meant to me,” he said, and shared his experiences from his own childhood growing up with a single mother and living below the poverty line.

“When I did that … you could almost see this emotion and release come off people’s shoulders, and people started to chime in,” he said.

Pogue said that, although Wade is Black, white leaders can, and should, show their vulnerability as well.

“You too have a story that involves race, even in the absence of it: ‘I was raised in a place where the only people around me were like me. Economically we were doing fine. I just didn’t know, I just didn’t see.’ That is critical and valuable,” he said. Whatever their experience, leaders can use it “as an onramp to these conversations.” The key is to make yourself vulnerable.

It was in one of those “Chat-with-Chip” meetings that the incident with the regular customer with the sexist remarks came up.

“That dynamic, those issues, are front-and-center in our industry,” Wade said. “We have to have the courage to not only educate our workforce on how to handle those situations, but most importantly, we have to back them up when they make the tough call.”

He said it was a similar situation to a bartender cutting off a guest who has had too much to drink:  Management has to support employees who confront customers who are rude, disrespectful or racist.

That can be a difficult stance to take. So can the time-consuming journey of changing corporate culture beyond what was tried in the past. 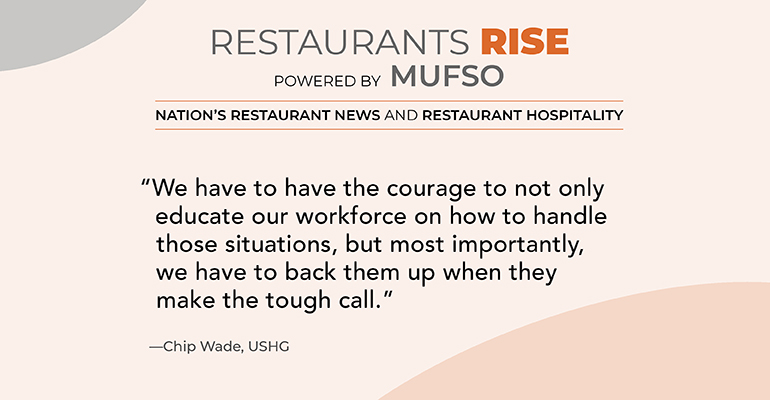 Wade and Simpson both said that acceptance of the new diversity & inclusion drive at USHG has been mixed.

Some have taken a wait-and-see attitude, they said.

“Some have said, ‘I’ve seen this movie before and the ending is the same,’” Wade said, while others have been enthusiastically pushing them forward.

“We can’t afford to pause,” he said. “I don’t think our leaders, our managers, frankly our guests will give us a hall pass to pause.”

He said a lack of diversity in their front-of-the-house staff at some of their restaurants likely discourages Black and Hispanic customers.

Simpson added that USHG’s drive goes beyond the traditional attempts of making sure they hire a specific number of  people of specific backgrounds.

“It’s really stopping the short-term checklist and looking at the long game. We’re going to make the right culture and then we won’t have to count how many people we have of color or ability/disability or gender, because this will just be the place people want to work and we will naturally attract the population that we serve.”