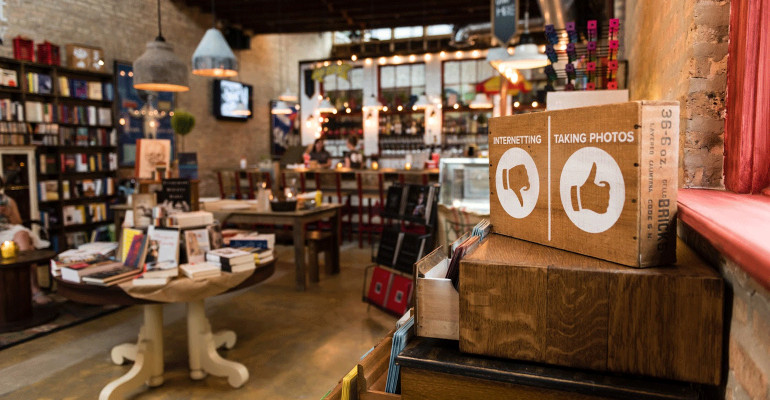 Some restaurants would rather not be guest workspaces

As a growing number of restaurant operators embrace the guest who would convert their cozy café into a personal workspace, others in the industry are pushing back on the trend.

Coffee shops and cafés have been populated by throngs of laptop users for the past 20 years, but some operators have taken a stand in order to create a more comfortable environment for the rest of their guests. 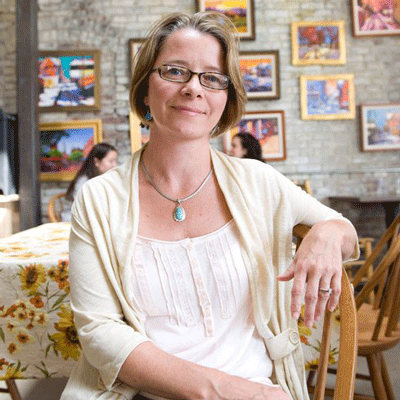 “Basically, we needed to put a stop to people coming in and using our restaurant as their workplace,” said Jodi Whalen, owner of August First, a café in Burlington, Vt., that has banned laptop use.

When Whalen first opened the café in 2009, she went along with the common practice of allowing customers to camp out with their laptops. Over time, however, the casual, comfortable restaurant she had envisioned had become instead a sea of isolated worker bees glued to their screens. In addition, she realized she was missing out on lunch business from customers who couldn’t find a seat.

“We would literally see money walking out the door, while people who had been sitting there for hours would maybe spend $3,” she said.

Whalen first tried shutting off Wi-Fi access, but then mobile phone hotspots became available. She then tried limiting laptop use by banning them from 11 a.m. to 2 p.m. so that potential lunch customers wouldn’t be put off. 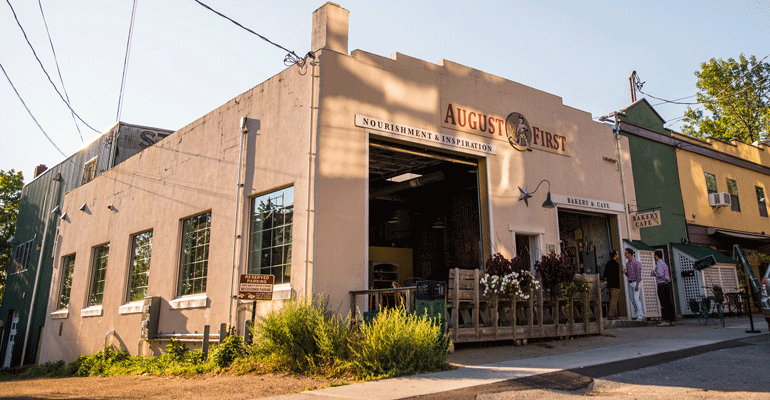 The customer response to the lunchtime laptop ban was encouraging.

“We were shocked at how many people came in and said, ‘Thank you for doing this,’” said Whalen.

The reaction helped spur her decision to eliminate laptop use altogether as of April 2, 2014, she said — noting that she waited until April 2 so people wouldn’t think it was an April Fool’s joke. Sales were up 20 percent in the first laptop-free year, Whalen said.

“It was one of the best business decisions we’ve ever made,” she said. “I don't think we’d still be in business if we had allowed laptop use.”

Kibbitznest Books, Brews & Blarney in Chicago has taken a slightly different approach to cutting down on laptop use.

Described as a book bar that sells new and used books and features a full bar with a limited food menu, Kibbitznest was founded by owner Anne Neri Kostiner, who at the same time created a nonprofit dedicated to promoting the benefits of disconnecting from electronic communications and preserving quality face-to-face human communication.

Although laptops and other electronic devices are not expressly banned at Kibbitznest, their use is discouraged, she said. If someone has been spending too much time on their laptop, she will suggest to them that they try doing something else instead.

Kibbitznest features an assortment of board games and also offers typewriters for customers who want to literally tap into the nostalgia of pre-internet communications.

“Over time, people get the message,” said Kostiner. “It isn’t about trying to force people to do anything. It’s about trying to raise awareness and let people understand it on their own.”

In addition to being a Wi-Fi-free zone, Kibbitznest deploys a range of tactics to discourage the use of electronic devices, including extensive signage, and programming that encourages face-to-face communication. There are also quotes on the walls, including one from Albert Einstein, about the negative impacts of technology.

She said when new customers come in and ask for the Wi-Fi password, it presents an opportunity to explain why there is no Wi-Fi and educate them on the Kibbitznest mission.

“Customers want to know there’s a reason” that laptop use is discouraged, said Kostiner.

Laptop users have become so accustomed to being able to connect at places like Starbucks, telling them “no” can be a challenge, according to café operators.

In a recent interview with the New York Times, Rich Nieto, owner of the Sweetleaf Café chain in New York, said he received a one-store review on Yelp after telling a customer that laptops weren’t allowed.

Whalen of August First said when she first imposed the laptop ban, some customers threatened to call the American Civil Liberties Union, as though laptop users were being discriminated against.

“We had to explain, ‘You’re not a protected class,’” she said.

Other cafés and coffee shops have tried various strategies to discourage laptop use, including adding design elements such as “brew bars” that are too narrow for laptops, where patrons stand with their coffee. Others have established device-free areas or restrict laptop use during certain times.

At Neo Coffee Bar in Toronto, for example, electronic devices are prohibited on weekends and holidays from noon to 4 p.m. in order to encourage a more social atmosphere.

“For us, even a quick stop into Neo Coffee Bar is about social connection and celebration of people, place and culture,” the company said in a statement, noting that the establishment wants to create “a community that encourages social interaction and making new friends.”