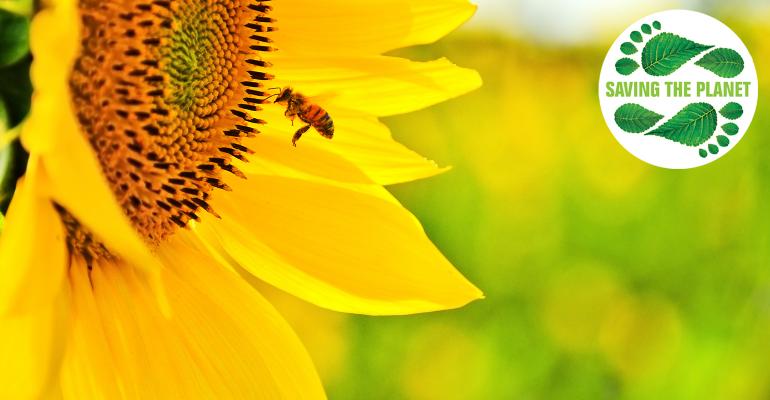 Restaurants do their part to help protect the pollinators

Bees may not save the planet, but they are vital to plant life that humans depend on for food. Across the country, chefs and restaurateurs are rallying to save the hives.

Related: Modeling the way to a lower carbon footprint

“A world without bees would be a world without fruits, vegetables, nuts and seeds,” Rosenberg said. “Our menu — and our planet — would be completely unrecognizable.”

Yet bees are dying off at alarming rates. Beekeepers report they are losing an average of 30 percent of all honeybee colonies annually, according to the organization Environment New York, and certain species of bees this year appeared on the endangered species list.

Related: Restaurateur promotes plants to save the planet

In February 2017, the Bee Friendly Food Alliance was launched. The organization has the support of 240 chefs, restaurant owners and other food-industry leaders who have pledged to work to protect bees.

Efforts include lobbying the U.S. Environmental Protection Agency to prohibit the use of bee-killing pesticides.

Rosenberg said her restaurants only buy from farmers that support bee-friendly practices. Wines served at the restaurants are organic and biodynamic.

In the spring, the restaurants give seed packets to customers to encourage them to plant wildflowers and educate them about pollinator protection.

Rosenberg said both restaurants have asked their respective landlords if they can raise bees on the property, but the request was denied. She said she would love to do more.

“The great thing about alliances like this one is that it’s not just a community of chefs and restaurants committed to the cause, but it’s educational, and it’s a way that we can learn more about what we can do,” Rosenberg said.