Chef Akira Back lands in Los Angeles with ABSteak 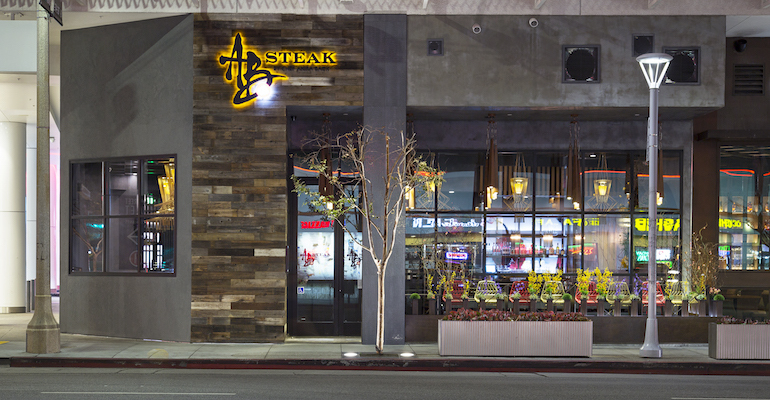 Globe-trotting chef and restaurateur Akira Back has landed in Los Angeles with the opening of ABSteak this week, described as a modern Korean steakhouse.

The South Korea-born chef who was raised in Colorado and was a professional snowboarder, has built a portfolio of 15 restaurants around the world, including the Michelin-starred Dosa in Seoul.

In the U.S., he operates Yellowtail at the Bellagio in Las Vegas in partnership with MGM. With the Light Group, he also operated the Japanese restaurant Kumi at Mandalay Bay there, but the group was later sold to Hakkasan Group and Kumi was later sold to hotel and restaurant operator SBE, Back said.

Located in the high-end-restaurant-filled Beverly Center mall, this is a second location of ABSteak, a growth concept Back plans to multiply.

In an interview, Back said he plans to bring locations of ABSteak to San Francisco this year and Boston in 2021.

Back is scheduled to open both an ABSteak and his eponymous Akira Back, a Japanese concept, at a new Warren Buffet development in Dallas.

Up next for Back is a new concept called Lumi, which blends Japanese, Korean and Peruvian influences, scheduled to open next month in San Diego.

Another new Chinese concept, not yet named, is planned for Boston this year, likely in October, he said.

Back said he didn’t intend to open so many restaurants at once. Many of the projects have been in the works for four or five years, but faced delays and are now coming to fruition.

With ABSteak, the chef merges the American steakhouse with Korean barbecue, serving up an array of premium dry-aged meats to be cooked on smokeless grills at the table.

It’s a meat-heavy concept, but Back insists there’s plenty on the menu for non-meat eaters. In fact, the chef said he is working on a plant-based steak made with watermelon. He has served a small-scale version at Dosa for years, but he has been working on making it into a more steak-like version for ABSteak.

“I want to be the first steakhouse doing that in this kind of environment. That would be very cool,” he said.

More is planned for LA, he said. “I love LA. I’ve been watching the market for a long time and I knew my food would work here. So far the feedback is unbelievable,” he said.

Here’s a look at the new ABSteak.

UPDATE: This story was updated to clarify the history of the restaurant Kumi.

Is it responsible to keep a restaurant open during a pandemic?
Apr 01, 2020