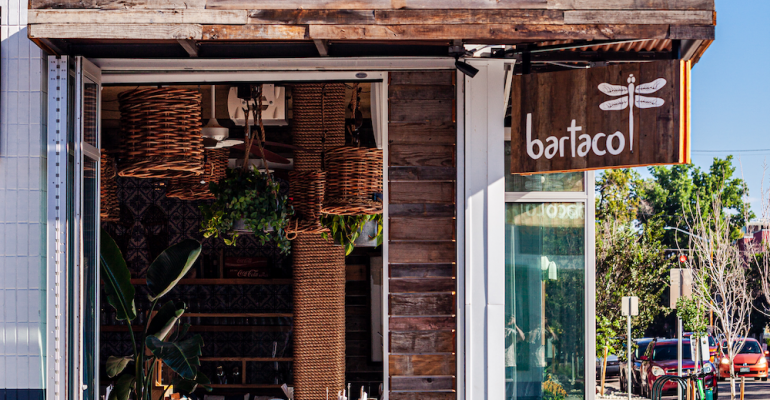 Bartaco
Bartaco is on a journey to reduce its carbon footprint. That effort includes investments in carbon offsets through Green Places.
Operations

As world leaders meet in Glasgow this week with dire messages about the need to reduce carbon emissions to hold back the disastrous impact of a rapidly warming planet, many restaurant operators are asking what their businesses can do to make a difference.

One such operator is Bartaco co-founder and CEO Scott Lawton, who had long been thinking about how to reduce the impact his 21-unit chain has on the planet. But he wanted to know more about the amount of carbon the small taco chain produces and whether it was possible to become “net neutral.”

So Bartaco became one of the first restaurant companies to work with Green Places, a company launched in July to help service-oriented businesses reduce their carbon footprint.

Green Places also offers opportunities for investment in “carbon-negative” projects that fight climate change, like tree planting and forest protection, renewable energy and new technologies to pull carbon from the atmosphere — the type of projects that are sometimes called carbon offsets.

The company was founded by Alex Lassiter, who previously created the software company Gather, which helped restaurants with private events and catering. Lassiter said he sold that company two years ago and had an opportunity to pursue a passion (saving the planet) and meeting a business need.

Business owners — particularly small businesses, like those in the restaurant industry — are under a lot of pressure to do something about climate change, but they don’t have the tools, said Lassiter.

“It’s different if you’re a Nike or Patagonia or a business that really has this as a core function. But for the vast majority of us, there just aren’t a lot of great solutions to do a great job here,” said Lassiter. “My thought was, ‘let’s make it really easy.’”

Green Places is designed to help businesses in three ways. First, it helps them calculate their carbon footprint.

Using a formula developed by UC Berkeley’s CoolClimate Project, Green Place, determined that Bartaco produces about 11,000 metric tons of carbon across its 21-restaurant system — or the equivalent of 2,392 vehicles on the road, 146 tanker trucks of gas or providing electricity to 1,998 homes for a year.

But no restaurant will be able to reduce its carbon footprint to zero. Lassiter said. So, for the carbon production that can’t be reduced by other means, restaurants can make an investment in carbon-negative projects and remediation to essentially erase their carbon footprint.

The idea of carbon offsetting has been around for two decades and has grown into a lucrative market, by some accounts projected to grow to $200 billion by 2050. For the voluntary offset market, there is little regulation and the quality and authenticity of projects vary, according to a recent report in the Wall Street Journal.

Lassiter agrees that there are two main challenges for offsetting:

“One is this notion of ‘can you offset your way out of the climate situation we’re in,’ and the answer is a resounding ‘no.’ Offsets cannot be the only answer,” he said. “If you’re using offsets as a way to justify bad behavior, then offsets shouldn’t be part of your strategy.”

The second challenge is verification. Green Places looks to invest in project that are “highly additional,” meaning the forest-protection program, for example, or alternative energy solution would not exist if not for the offset subsidy.

Green Places works with three third-party verifiers, including the non-profit Verra, which works on forest preservation and restoration; the American Carbon Registry, a non-profit subsidiary of Winrock International; and Gold Standard, which is supported by the World Wildlife Fund and other non-governmental organizations battling climate change.

Those advisors help Green Places make investments with verified impact, Lassiter said. Carbon offset purchases through Green Places are pooled to have greater impact, but clients can choose whether to invest in the primary fund or target their investment more specifically.

“One of the biggest issues is businesses making these big broad declarations, but not actually being transparent about what they’re doing,” he said.

Such details are important not only for guests, but also for recruiting talent, said Lawton. “We want to be a place where the team is proud to work,” Lawton said. “We want to attract young, smart individuals who want to grow with our company.”

Lawton, however, declined to share the amount of Bartaco’s carbon offset purchase. It varied by restaurant and was tied to each specific unit’s carbon reduction goals, he said.

“I don’t want to throw a giant number out there and scare people away,” he added.

But for Bartaco, it’s one step on a journey. Lawton said Bartaco is moving into Phase 2 to look at  ways the chain can build in more sustainable energy sources and find ways to reduce food-prep waste or use technology to create efficiencies.

“We’re at the beginning of our journey and we’re just starting to learn,” said Lawton. “We don’t want to claim that we’re experts or that we’ve got this problem solved, by any means. We just want to be part of the solution and keep working toward doing a better job.”