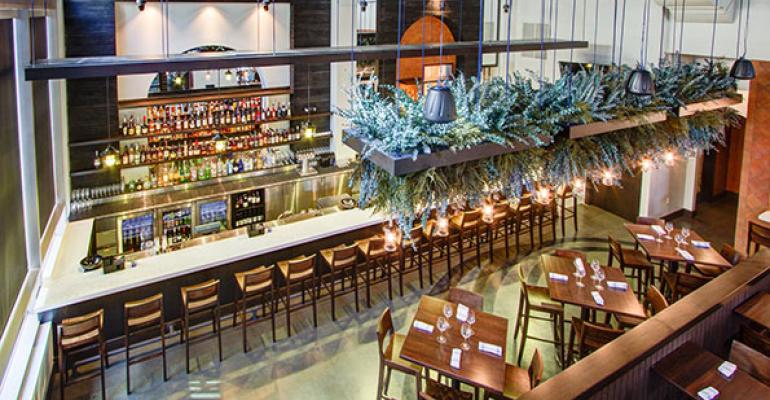 <p>Bigger bars are a new construction trend, according to Rob Mescolotto, founder and owner of D.C.-based Hospitality Construction Services.</p>
Operations

5 things you need to know about restaurant construction

What you need to know before you talk to your contractor &bull; See more Operations articles

Construction companies do more than build restaurants. The good ones are educated in many different aspects of the industry, from working with architects to analyze the logistics of a space to determining the viability and resourcefulness of different finishings and materials.

Mescolotto, who’s currently building a sushi kitchen and rehabbing a late-1800s building into a brewery, helped outline five aspects of restaurant construction to keep in mind when you’re getting ready to build.

1. More renovations, less ground-up
D.C. is an established city and there isn’t much space for new construction. So Mescolotto has found himself working on a lot of renovation projects, such as the Mad Fox brewery, where he’s pulling apart a building that’s already been redone three times and has layer upon layer of finishings.

He recommends keeping your options open and not getting stuck on a particular building that may have caught your eye. He’s escorted restaurateurs to more than 100 properties before they decided on one, looking at each from a construction perspective. Some are “monetarily burden,” he says, adding that few restaurateurs are able to look beyond the façade. “Nobody cares about things they cant see—electrical wiring, HVAC,” he says. “With a new building, that stuff is pretty easy, but with renovations I often have to go back and tell them their allowance needs to be higher. With renovations, a lot of buyers are ending up in as-is conditions.”

2. Ensure you stay on budget
One thing restaurateurs understand well is their budget. A good construction company understands that if he can’t meet the restaurateur’s budget from the beginning, he’s already putting the project in jeopardy.

As an example, Mescolotto cites Heartpine wood, an often-desired finish due to its strength and good looks. But he claims Cypress serves the same purpose and is just as beautiful, yet at a much lower cost.

Another example: Everybody wants reclaimed materials in their restaurant. While the idea of sustainable construction is admirable, the economics don’t always make sense. For example, one of Mescolotto’s clients saw a porcelain, black and white checkerboard floor in a 200-year-old Spanish monastery that he thought would be a perfect fit for his restaurant. After learning it would cost $35,000 to ship and install 250 square feet, he decided to go in a different direction.

3. How to pick a construction company
First and foremost, a general contractor with knowledge in the area where you wish to build will be a tremendous benefit.

Outside of knowing the market, look for a builder who will go above and beyond to keep your budget in tact. For example, say a ceramic tile accent wall featured in a brochure caught your eye. A good contractor will understand that marketing is half the battle and there are cheaper ceramic manufacturers who don’t spend as much money on marketing but have higher-quality products.

“Architects are getting swooned by marketing agents,” Mescolotto says. “My job is to take that material and find a way to get it for less money.”

Another quality to look for in a construction company is one that will be with you step-by-step throughout the process. Find someone who will not give an unrealistic timeframe but instead wait until the materials have arrived before suggesting an end date.

4. Get the right people involved early
While the restaurant owner will dictate the budget and how the money will be spent, it’s important to get key constituents such as the chef and bar manager involved in the project early.

A bar manager may have insight into where sinks need to be placed. A chef knows how he needs to fire the orders and might suggest an expo table where he needs to plate the food, for example. The owner is involved to make the calls on what to buy, but the whole process needs to be a team approach.

You may choose to involve a kitchen consultant as well. Many are willing to do their drawings free of charge if you buy the equipment from them.

5. Pay close attention to dining trends
While they shouldn’t derail you from your desired direction, it’s important to know what consumers today are looking for in their dining experience. Mescolotto shared several restaurant trends he sees emerging today.

“Everything is boutique, nobody wants to go to chains,” he says. “They want to feel like they are the first person there. They want everyone to know their name.”

Acoustics are more important today than ever before, he says, suggesting food critics are walking around with decibel measuring tools that will illustrate how loud customers must be for their dining partners to hear them. Acoustic ceiling tiles can be hidden for a reasonable cost.

Bars are getting bigger because “everyone likes to drink,” Mescolotto says. A 60-seat bar is not out of the question because bars can serve the same menu and bar guests are much more patient.

Community tables are falling out of favor, Mescolotto says, but chef tables are in. Diners want the experience of the chef saying ‘hi’ and being part of the meal.

In the kitchen, many chefs asking for multiple fuel sources. Full-fire brick hearths are in, allowing chefs to cook without gas, but gas might be needed for stocks and simple preparation work.

Storefronts are changing as many restaurant owners want their doors to swing wide open, exposing the restaurant to the outside. Garage doors no longer cut it as restaurants are adding custom steel assemblies and archways that open up to the outside.

In the end, building a restaurant might appear to the newcomer as a fairly straightforward process. But there are a slew of decisions to be made, all within a budget, and the right construction firm should be with you every step of the way.