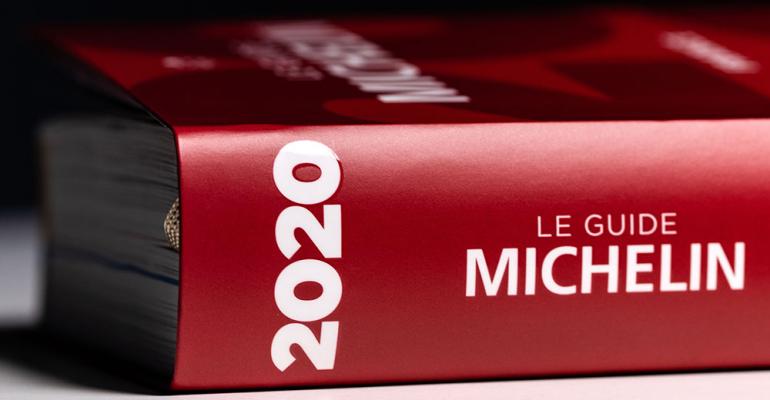 JOEL SAGET / Contributor / AFP
Michelin stars to resume after pausing during the pandemic plus four other stories from last week you may have missed.
Operations

Restaurant operators’ ability to pay rent is improving, according to the small-business network Alignable. A monthly poll indicated 35% wouldn’t pay rent versus 63% unable to meet lease terms in March. However, the Boston-based referral network said Friday that more than half of surveyed minorities that own small businesses could not afford to pay April rent on time.

Alignable’s April Rent Poll, conducted among 8,943 small businesses from March 27 to April 5, indicated that covering the rent remains a major obstacle for nearly one-third (31%) of all U.S. small-business owners as they COVID-19 pandemic continues. But for 53% of minority-owned small businesses could not afford to pay their full April rent on time, compared to 67% in March.

As both a mobile and web app, Citizens Go will allow customers in select cities — so far in Los Angeles, Northern California, New York City and Chicago — to place mix and match orders from C3’s 200-plus virtual and brick-and-mortar brands. All of the brands will be in one place in an omnichannel, digital food hall-style delivery experience and available, depending on where you’re ordering from (and which ghost kitchens are nearby).

Here’s how Citizens Go works: Customers within delivery radius of the C3 network of ghost kitchens will be able to download the app for Android or iPhone and place an order from one (or multiple) of the available brands. The food is then delivered all at the same time through DoorDash’s third-party last-mile service, Ride United. In celebration of the launch, for the first order placed on the service, all customers will receive a free Umami burger.

But even though C3 is partnering with DoorDash on this, Lunchbox CEO and cofounder Nabeel Alamgir said that he considers the product they’ve created to be a competitor to traditional third-party services, which take the in-house capabilities out of operators’ hands.

Following California’s recent announcement that it would be reopening on June 15, Nevada’s governor has announced the state will drop capacity and indoor-dining restrictions as of June 1.

Gov. Stephen Sisolak said last week the state would reopen to 100% capacity across all industries on June 1. The statewide social-distancing mandate will be removed May 1.

Decision-making regarding social distancing, vaccinations and more is scheduled to revert to county control by May 1. The statewide mask mandate, which will remain in effect after June 1, cannot be overridden by businesses or counties.

In the fall of 2020, the Michelin guide was put on pause in light of the coronavirus pandemic along with several other prestigious awards in the restaurant industry, like the James Beard Awards (which will remain suspended for 2021).

Last week, however, Michelin announced it would resume awards this year and announce stars in New York City, Washington, D.C. and Chicago. More broadly, the guide will designate “Bib Gourmand” and “Plates” restaurant picks outside of those three cities. The city-based awards are being called “Still Serving” by Michelin, in honor of the restaurants that remained open after 2020.

Additionally, Michelin will give out “green stars” to restaurants that operate sustainably, and it will award individual chefs and sommeliers as well.

According to the Washington Post’s reporting, the Michelin judges dined out much like the rest of America during the pandemic, dining outdoors and among plexiglass dividers.

Read more: After a pandemic pause, Michelin will resume awarding stars to restaurants

The 800-square-foot space is available to rent for pandemic-compliant parties, dinners, and showers. It seats up to 12 and has standing room for 20 under the city’s COVID-19 restrictions. The multi-purpose space is designed for events, recipe testing, and filming.

Covered in bright colors, exposed brick and dark wood finishings, the space is meant to be seen and photographed and that’s just what Izard wanted. The test kitchen functions as a photo and video studio and is available to rent for those in need of a space to cook or film, partially inspired by Izard’s own pandemic-era Zoom and Instagram cooking videos.

The test kitchen also has a permanent retail space for Izard’s Little Goat-branded consumer-packaged goods including sauces, spices and toppings.