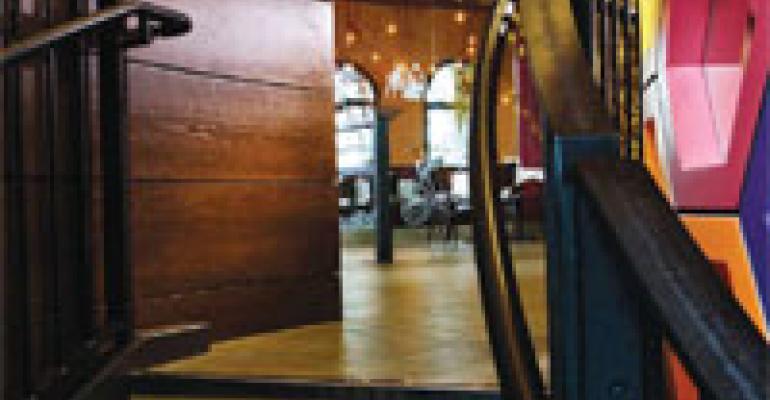 Taking It To The Next Level

The culinary community in Chicago is scratching its collective head over Jose Garces, the chef whose new Spanish restaurant, Mercat a la Planxa, has taken the town by storm. They can't figure out how someone so talented and with such deep local roots — Garces was born and raised in Chicago and is a graduate of the city's Kendall College School of Culinary Arts, but has never cooked here until now — has flown underneath their radar for so long. “He's a native son,” they ask. “How did we all miss him?”

Good question, but Chicagoans aren't the only one asking it. The 36-year-old Garces' stellar culinary career hasn't gotten the full national attention it deserves for a couple of reasons. One is his concentration on Nuevo Latino cuisine. Until recently, it has been an important yet relatively minor player in the high-check-average restaurant arena.

Another is his choice to work under two of the restaurant world's brightest stars, chef Douglas Rodriguez and restaurateur Steven Starr. And when Garces did strike out on his own, it was in Philadelphia, a major market, to be sure, but not quite in a league with New York, Chicago, San Francisco and Los Angeles. Nevertheless, Restaurant Hospitality named him a “Rising Star” in our June 2004 issue.

That's all about to change now. Mercat a la Planxa opened in March inside the newly renovated Blackstone Hotel on Chicago's South Michigan Ave. Garces describes the 162-seat spot as a modern tapas restaurant with food inspired by Barcelona and the Catalan region of Spain.

Guests can swap and share small plates drawn from the lengthy tapas menu. The broad menu also lists numerous options that highlight great Spanish ingredients: fabulous cheeses plus a dandy “charcuteria” selection from which patrons can order up slices of four kinds of the finest Spanish jamón. The a la planxa — pronounced PLON-cha and meaning cooked on a flat-top grill — section allows Chicagoans not interested in small plates of anything to order big hunks of protein. There are 10 types of grilled seafood and 10 meat options here, akin to a steakhouse lineup. “La Mesa De Jose” is a special chef's choice tapas menu that goes for a reasonable $55.

A shortened version of this menu is served at lunch, and there's breakfast, too. Beverage options — Spanish wines, cavas, ciders and beers — include 40 Spanish wines available by the glass.

Chicago has already been the scene of several high-profile restaurant openings in 2008, but Mercat still had an instant impact. That's a tribute to Garces' culinary skills and his restaurant-opening expertise.

It's impressive, especially when you factor in that Garces has never actually done Catalan food before. He headed for Spain after graduating from Kendall at age 22, cooking for a year in Andalusia. He came back to the U.S. for line cook gigs at The Rainbow Room and the Four Seasons in New York, then hooked up with Nuevo Latino pioneer Doug Rodriguez at his seminal Manhattan spots, Pipa and Chicama.

Then in 2000 Garces was recruited by ace Philadelphia restaurateur Steven Starr to become executive chef at the Cuban-inspired Alma de Cuba. From there he moved over to run the kitchen at Starr's El Vez, where contemporary Mexican dishes were the bill of fare. In 2005, Garces took his first stab at the chef/owner role with Amada, a 138-seat Andalusian tapas bar that brought national attention to the Philadelphia-based chef. Last year he debuted Tinto, a wine bar serving the food of Spain's Basque region. Originally a 50-seat operation, Tinto was such a hit that plans were soon drawn up to expand capacity to 110. Next comes Chilango, a 300-seater set to open in West Philadelphia later this year. Garces calls it his “ode to Mexico City.”

Which is to say, of the five Philly restaurants of which Garces has been or will be the boss, none of them feature the particular type of food — Catalan — he's serving in Chicago. It turns out that Garces, of Ecuadorian heritage, is most accurately described as a master of cuisines from the Spanish-speaking world. It's a good skill set for an ambitious chef to have in 2008, when Spanish-tinged cuisine of all types is hot in America — okay, maybe not the foam-based kind — and investors seek out its most skillful practitioners. Demand is outrunning supply and Garces is, at the moment, one of the few chefs who sit atop that supply chain.

Expansion in a new city requires a sharp operations partner, and Garces hooked up with a talented one in Peter Karpinski for Mercat. He's head of Denver-based Sage Restaurant Group, which specializes in creating moderately priced yet hip restaurants in landmark-class hotel properties. The pair met when both worked for Starr, and the success of Mercat a la Planxa portends more collaborations in the future.

Garces is a Beard Awards Best Chef Mid-Atlantic finalist this year. Chicagoans hope he wins — but comes back home soon to open more like Mercat.